Derek Hunter
|
Posted: Jan 03, 2016 12:01 AM
Share   Tweet
The opinions expressed by columnists are their own and do not necessarily represent the views of Townhall.com. 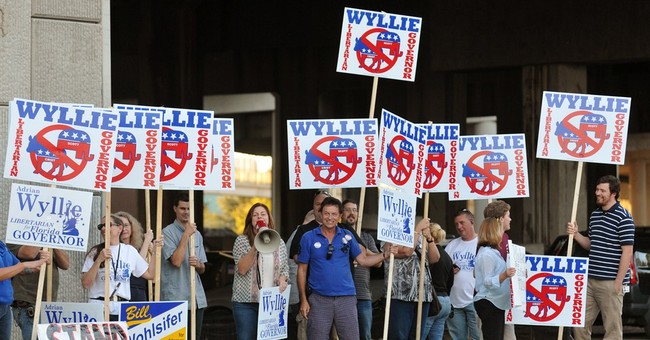 There’s a reason liberals have been so successful in advancing their agenda in the past few decades. It’s not just electoral victories – they’ve played a part, and it’s easier to make things happen if you win elections. But the main factor in their victories is one thing we conservatives are losing sight of: patience.

In the time of Twitter breaking news, Tinder, microwaves, On Demand, etc., patience is as dead as detectives wearing Fedoras and calling people “Mac.” But it’s key in politics, and conservatives have forgotten that.

Ronald Reagan – the real man, not the myth created with his name – understood the importance of patience. He almost won the GOP nomination in 1976 but lost to President Gerald Ford.

Although Ford was no conservative, Reagan didn’t turn on him. He supported him. When Ford lost, that opened the door to Reagan’s victory four years later. Had Reagan refused to support Ford, or actively criticized Ford and hurt him in the 1976 election, there’s a chance 1980 would’ve turned out differently.

Even as president, Reagan understood the importance of patience. His victories in dealing with Congress and the Soviet Union (not much of a difference there, in many respects) didn’t come immediately. Incrementalism was a key weapon – you take what you can get and keep fighting for the rest. What Reagan didn’t do was throw up his hands when he didn’t get all he wanted, leaving small victories on the table because total victory wasn’t, at that moment, obtainable.

Far too many conservatives have forgotten that political victories take time, even if the loss they’re trying to reverse is still fresh.

Libertarians are famously inpatient. It’s why, outside of a few court victories, they are mostly irrelevant. I take no pleasure in saying this; the country would be much better off if we were significantly more libertarian. But when there’s a political fight to be had, they sit on the sidelines criticizing both sides rather than putting their weight behind the side moving the ball in the direction they want to go.

The purity of libertarians is to be admired, at least in the sense of ideals. The practical implementation of purity as a guide for conducting politics is not. Far too many oppose actions which would move the country in the direction they want because it doesn’t go far enough. They want it all, and they want it now – and anything short of that is a sell-out.

Many conservatives have adopted this attitude.

Liberals have been successful because they’ve adopted the opposite stance. For generations, liberals have sought to seize control over health care in the United States. They haven’t yet, but every move they’re made on health care has pushed them closer to that goal.

Medicare covers the elderly and disabled; Medicaid covers the poor. Liberals have been fighting to lower the age of Medicare eligibility for decades, but they’ve, thankfully, been blocked. They’ve also been fighting to raise the income eligibility for Medicaid for decades, and they’ve been winning. This left a shrinking middle uncovered by government insurance. Obamacare is changing that.

For all the problems with Obamacare, it’s serving its purpose of crowding out private coverage. It was never designed to be the endgame; it’s an increment. It moves the country closer to a government takeover of health care. That was its purpose; that is their plan. And they waited decades for it.

Conservatives, on the other hand, don’t have that kind of patience. With every new electoral victory, they expect some massive shift in the country immediately, if not sooner.

Sadly, much of liberalism is engrained in our laws, our courts and our culture, so it will take time to uncouple it.

Real conservatives are a small percentage of the Republican Party and Republicans in Congress. Yet many conservatives, particularly in media, think each electoral victory immediately should bring about massive conservative change. When that doesn’t happen, they attack with a ferocity they don’t reserve even for liberals.

No single election is going to turn the tide back toward constitutionally limited government; no one person elected to office will be as pure as the wind-driven snow in their conservatism. It’s going to be a long slog; there are going to be losses. Losing a battle does not constitute losing a war. But quitting does.

There never will be a “silver bullet” election or candidate; that’s impossible. Many times you have to stop getting worse before you start getting better.

For all their shunning of Christianity, Democrats have the patience of Job when it comes to their agenda. Republicans, on the other hand, are Veruca Salt. They want a Golden Goose and they want it NOW!

Veruca ended up going down the garbage chute. If conservatives don’t regain some strategic patience, they’ll suffer the same fate. And the country won’t be far behind…