We Need To Care Less 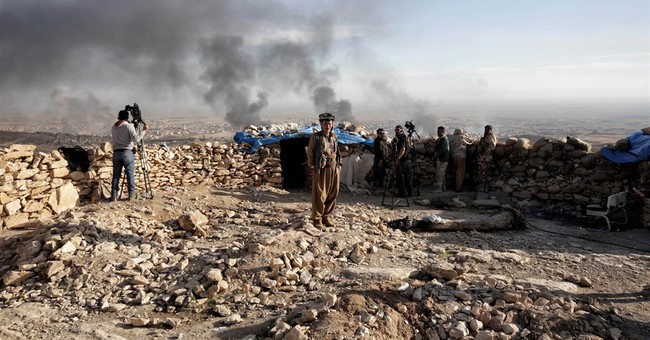 It’s hard to look at the terrorist attack in Paris and not feel awful. It’s also hard to not feel rage. In fact, unless you’re a progressive (seriously, look at how they complained they weren’t getting enough attention for their fraud crusade while people were being slaughtered), revenge is a natural human emotion. We don’t act on it as a society anymore, but we should.

After we were attacked at Pearl Harbor, our country went all out for war. They hit us; we were going to hit them back until they begged for mercy. Germany, which had declared war on us but hadn’t attacked anything, found itself on the business end of the American ire as well, as did Italy, the little brother in the Axis Powers. They would all be completely destroyed and nearly wiped from the map by the end of World War II.

We don’t fight like that anymore. We won’t allow the military to do its job. I just got done watching Real Time with Bill Maher and hearing him whine to a bunch of liberals and his typical token polite conservative about how we can’t bomb these ISIS mongrels out of existence because they’d simply blend in to the general population. I have one word to say to that: Dresden.

In 1945, as WWII was nearing an end, the Allies pummeled the German city of Dresden. There was some military benefit to bombing the city, but the bombing went well beyond that. Germany was in retreat, months from unconditional surrender, but a price had to be paid, a message sent. And so it was.

Somewhere around 25,000 civilians were killed in the bombing of Dresden. Horrible. Awful. And so what?

Dresden is an extreme case, but it is clear we no longer are willing to do whatever it takes to win.

Civilian casualties were a factor in the Allies’ military decisions, but not a deciding one. The objective overrode everything else. The purpose of the war was to defeat the enemy – hearts and minds would have to wait.

That has since been flipped, and we haven’t been the same militarily since.

Islamo-fascists are raping and beheading their way across the Middle East and Europe. Barbarians with a 7th century outlook on life have demonstrated a willingness to do whatever it takes to advance. And the West, the United States? Our leaders can’t even bring themselves to accurately name them.

Before we had a complete body count from the Paris attacks, progressives were more concerned with blame than comfort. “Terrorism has no religion” began trending on social media. People call the bakers who don’t want to participate in gay weddings “terrorists,” but they can’t admit it was terrorists motivated by radical Islam who launched an attack that killed 150?

This over-sensitivity will be the death of us. ISIS’ thugs need not attack – if they wait long enough, we’ll destroy ourselves. Unless, of course, we return to the idea that winning a war is why you enter one.

Before we do that, we have to admit we’re in a war. Regardless of whether you want to be in a war, if you’re getting attacked repeatedly, you’re in a war. Islamo-fascists are at war with us, and they’re willing to kill anyone and everyone they can to strike out at us. They don’t care what color someone is, how old they are, what gender … if you aren’t them, you are expendable.

Civilians aren’t collateral damage, they are the preferred targets of radical Islamists. They can kill more of them before anyone who can fight back arrives. As awful as it is, they’re fighting to win. We are fighting to make people feel better; to make them care.

Americans are compassionate people. But what progressives think of as compassion paralyzes them on national security matters. They are more worried about the appearances of military action and how it will play “on the Arab street” than they are in protecting their fellow countrymen. We’ve removed ground forces in any meaningful way and limited air strikes to protect against civilian deaths to the point of near-impotence.

The greatest fighting force the world has ever known is playing video games because it fears unpopular b-roll on the nightly news, while monsters are on the march to conduct female genital mutilation. They think God is concerned with their facial hair while cheering mass executions, and we have Democrats drum-circling over the prospect that someone on a college campus might be uncomfortable because their parents did a horrible job raising them.

We are crippled to the point of inaction over the thought of how the world would react to civilian casualties, and how Americans would “feel” about them. But because of our inaction, civilian casualties in both the civilized and Islamic worlds are piling up.

In short, we care. Our enemies do not care; they just want to kill. They are few, and compared to us they are weak. But we’re unwilling to act, at least in any meaningful way, so they are winning.

We need to care less. We need to inflict pain and death on as many radicals as we can, regardless of the collateral damage. If you’re eating dinner with a leader of ISIS, even if you’re just a small shop owner, you’re on board with them. There aren’t many people who think, “Yeah, he’s a psychopathic murderer who orders the mass execution of prisoners, but he’s good company when he’s not slaughtering women and children.”

If you have those monsters in your home, you have blood on your hands, even if you’ve never had to physically wash any off.

As for the argument that fighting a war like we’re in will only serve to recruit more terrorists, I’d like to point out that ISIS isn’t shrinking. No matter how many we claim to bomb from 30,000 feet, there already are more in the pipeline. It has nothing to do with Gitmo. It has everything to do with them seeing few, if any, consequences for doing so. Jihadi John was allegedly killed this week, but he had a long run. And if you think paradise and a pile of virgins awaits you when you get killed, the threat of death isn’t going to stop you. Only actual death will. We should aid in that.

We, as a nation and as part of western civilization, have to get used to the idea that we’re going to have to inflict serious pain on some innocent people so more innocent people aren’t murdered. And who knows, maybe that pain will be enough to inspire the millions of young male refugees claiming they only want to be free to stand up to the monster they’re fleeing. They’re willing to fight in courts for welfare in Europe; they need to fight half as hard for their countries.

Terrorism will never be fully destroyed, but that doesn’t mean you don’t do everything you can to cripple it. Bombing Dresden helped break the spirit of the German people and helped wipe the lust for war from their psyches. Simply waiting and hoping while the innocent are slaughtered hasn’t caused the Muslim world to stand up to this cancer in their midst, maybe some real consequences for their passive acceptance will.

Our military has been hindered by politicians unwilling to make the moral case for a full-blown brutal war, but the American people are ready for that message. If someone has the guts to deliver it.

Terrorism must not be allowed to become an acceptable risk to the free people of the world, nor can we sit by as it becomes a minimally consequential endeavor for those who engage in it. Unleash the war machine to destroy the enemies of liberty abroad, and the majority of the American people will do the same ideologically to sympathetic fellow travelers at home.

They’re at war with us, it’s time to actually go to war like we used to with them.