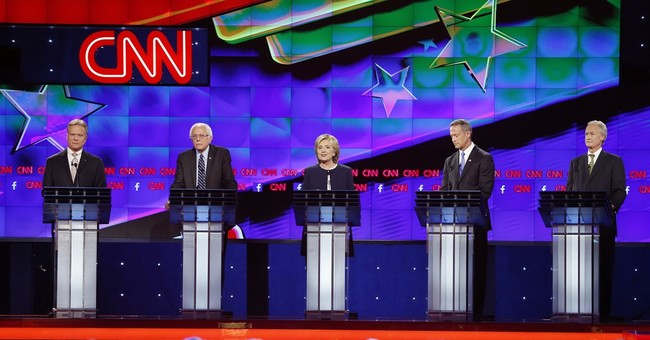 It’s over. The Democratic Party’s first debate just ended, and my main takeaway is how sad it is that the party of JFK has been reduced to five elderly white people arguing over who can out nut-job each other.

For all his problems, Kennedy was a tax-cutting anti-communist who loved and defended this country whose values have no place in today’s Democratic Party.

I don’t know what country those candidates were talking about, but it sounds awful. It has a rigged system that keeps down minorities, women, gays, men, aliens, animals, trees, anything living and most things dead. But somehow this horrible nation favors the rich. I’m not sure how they earn the money the rich steal from them since they’re so severely oppressed, but it all just sounds horrible.

Whoever has been running the place they were speaking about must be some kind of monster for not fixing these egregious injustices.

Fear not, America. Those Democrats running to replace that person promise more of the same, only with different results. There’s a definition of insanity in there somewhere.

The basic theme of the Democratic debate was: “Big government isn’t working, so we need bigger government.”

Aside from Jim Webb – who appears to have been in hibernation since the JFK days and still believes in what the Democratic Party once stood for – not a single candidate has any semblance of a realistic view of the world.

Martin O’Malley was a robot low on batteries. His most memorable moment was… Wait, he was there? O’Malley tries to speak in sweeping prose, but he never says anything. He’s the white Maya Angelou, minus the talent, who seems to be running for president only because he knows he’s otherwise unemployable outside of academia. I don’t promote drug use, but Marty could use a bump or two of cocaine before the next debate, if he makes it that long.

Lincoln Chafee was governor of Rhode Island. Seriously. In fact, Rhode Island elected him the mayor of a city and to the U.S. Senate before it made him governor. Again, I am not kidding. Our smallest state is, it turns out, our densest when it comes to crazy.

This rejected concept for a Muppet is running for president because even academia won’t hire him. His most memorable moment was admitting he voted for a bill he opposed because he was new to the Senate and it was popular. He’ll make the next debate because the only way he’ll have anything better to do is if the rocks he talks to begin to answer back.

Bernie Sanders is what would result if Larry David impregnated the Cookie Monster. He represents a state whose major industry involves hammering spigots into trees and driving to New Hampshire to avoid paying sales tax. His adult life has been spent in government, and he has nothing to show for it. Name a single bill he shepherded through Congress into law. That’s what I thought.

He loves free stuff more than junkies love methadone. But like a junkie, he has no idea how to pay for any of it. Moreover, he has no concern about it. If you lend a junkie money, you never get it back. If you elect Bernie Sanders you will never get your wallet back. He’s the only human being who looks at an $18 trillion national debt and thinks, “That needs to be doubled.”

Sanders hates Wall Street “speculators,” which is anyone with an IRA who actually wants it to increase in value. Stagnation as “social justice” and a “you can’t do it” attitude has led Bernie to corner the “get off my lawn” vote.

His most memorable moment was staying awake past the streetlights turning on.

Hillary Clinton was there too, promising to do for the country what she’s done with the Clinton Foundation – spend other people’s money on her whims. After having successfully sheltered her family’s fortune, she’s promising to raise taxes on people in whose tax bracket she would be in if she hadn’t created a “charity” to pay her expenses.

She’s joined Sanders in calling for “free” college of everyone, which must come as a shock to professors, administrators and janitors who would have to work for no pay to fulfill that pledge. Of course, she’s not talking about anything for free; she’s talking about paying for it with massive amounts of our money. Actually, not our money – our money and our kids’ money is already spent. Clinton is now promising to spend the money of zygotes and the children of zygotes.

Hilariously, in the midst of a scandal and FBI investigation about how she mishandled classified material, Hillary had the gall to condemn Edward Snowden for mishandling classified material. Everyone on stage either was too drowsy to notice or too afraid they’d never get another paying job in Democratic Party politics to say anything.

Her most memorable moment was a pee joke. Seriously. Returning late from a break, Hillary said it takes her “longer.” It was funny, but it also was fitting. When asked how she would be different from Barack Obama her answer was pretty much that she would always use the toilet sitting down. That probably needs to be fact checked, on both parts, but I’ll let it slide.

The big winners of the night were the people who didn’t watch. Even if they spent that time chewing glass, they made the right call. That in a nation of 330 million people, in which a third belong to that party, these are the best the Democratic Party could field tells you all you need to know about how far it has fallen.

That one of them, based almost exclusively on who she married and how she uses the toilet, could end up being president of the United States says a lot about how far the country has fallen.