The Clintons Continue To Clinton 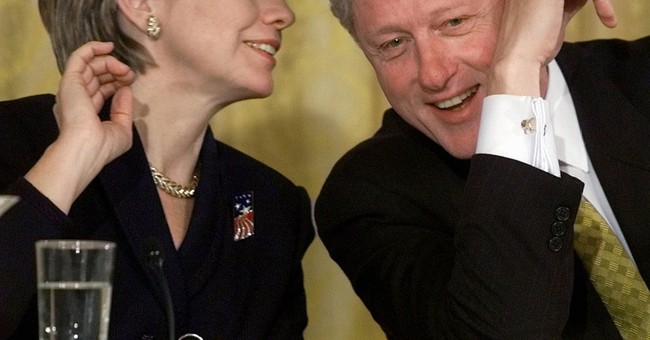 The hundreds of millions of dollars from corrupt governments, billionaires with agendas and God knows who else. The server wiped so thoroughly – and no, not with a cloth – you can tell someone learned the importance of cleanliness from the blue dress. And now we learn Bill, the former president, with more money than he possibly could spend in his lifetime, sought approval to take even more from some of the worst human garbage ever to walk upright. (More on this later.)

It’s enough to make the sane wonder what the hell is wrong with these people.

But Clinton lovers are not sane. They are not rational. Hillary could give a press conference and explicitly call her supporters the dumbest people on the planet while Bill stood behind her throwing puppies and kittens into a wood-chipper, and she’d still have a base of support.

A new Quinnipiac Poll found the top three words Americans associated with her were: 1. Liar; 2. Dishonest; 3. Untrustworthy. The first positive word people associated with her was “experience,” which was given by less than half the number of respondents who answered “liar.”

That is awful, yet she is the best the Democratic Party has to offer.

As “the best,” Hillary Clinton is now so weak that Joe Biden – JOE FREAKING BIDEN – is now seriously considered a possible savior for the party’s chances.

It’s because the Clintons are known by those three words – dishonest, untrustworthy liars.

How else to explain Bill Clinton, a former president and even then a potential future first husband, asking for (and not getting) State Department permission to deliver a paid speech in the Democratic Republic of the Congo?

Women are terrorized in the Congo, routinely raped and worse. Why on Earth would anyone, let alone a former president, wish to speak there and, as part of the package, have a photo-op with the country’s leaders?

As if the Congo idea wasn’t bad enough, Bill Clinton also sought permission to give a paid speech in North Korea.

North Korea – the nation Bill Clinton cut a deal with as president, the nation he agreed to give nearly everything needed to build a nuclear bomb in exchange for the promise it wouldn’t build a bomb; then, surprise, it did – is one of the most isolated and oppressive nations in history. Its population starves while its leaders grow fat and live like kings. This government wanted to pay Bill Clinton to speak. Worse, Bill Clinton wanted to take the money.

Even more bizarre is the fact the Clinton-North Korea speech was facilitated by Tony Rodham, Hillary’s brother.

We’re still waiting for someone to ask Hillary how her brother came to be the intermediary for North Korea in this and be in position to offer her husband untold piles of money for a speech.

The answer, of course, is this is Tony Rodham’s life. He is a satellite around his sister and brother-and-law – always there, always close, but not too close. Like so many in the Clinton circle, these people pop up when you least expect them, where they’re least qualified, often times buried in money, but far enough away for plausible deniability.

The documents released this week exposing Bill’s failed despotic money grab were discovered not by dogged journalists conducting extensive investigations of a top presidential contender but thanks to public records requests from Citizens United.

Come to think of it, the words Americans most associate with Hillary Clinton are words people associate with the media, so “birds of a feather” and all that.