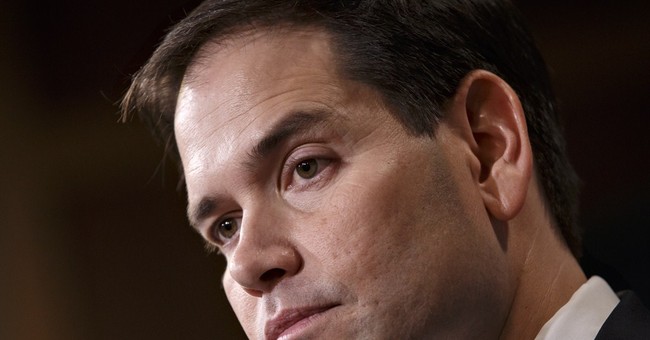 The Republican field for 2016 is deep and diverse. Democrats, on the other hand, find themselves in the position Republicans were in 1996 and 2008 – with no heir apparent, no standard bearer, settling for someone willing to run.

Hillary Clinton is “inevitable,” unless she collapses under her own weight, but she’s the least inspiring candidate since Bob Dole. Dole is a fine man with a compelling story, but he was an uninspiring candidate. Hillary doesn’t even have the compelling personal story going for her.

That heightens the importance of the GOP primary fight.

The best thing Hillary has going for her is her gender. She has no accomplishments to speak of, no record to run on. The “reset” with Russia was an unmitigated failure, and she was so undistinguished in her foreign policy acumen that President Obama bypassed her on the Israeli/Palestinian conflict and appointed former Sen. George Mitchell as his “Special Envoy for Middle East Peace,” rendering her irrelevant on the issue.

Deficiency of accomplishments aside, Americans love “firsts,” and Hillary would be the first female president. It is going to take an extraordinary candidate and campaign to defeat her, even with her shortcomings.

Looking at the potential field (and one announced) of Republican candidates, each is formidable and would, on paper, trounce Hillary or any other possible Democrat in an election. After all, the economy is treading water, jobs are non-existent, our image in the world is in tatters, tyranny is on the march and this fiasco was all financed with $9 trillion in additional debt. But elections aren’t won on paper.

We are in the age of the Kardashians, where accomplishment matters less than it ever has. A slogan of “income inequality” should be easily defeated by a candidate who could invoke the American spirit and individual responsibility. But those concepts, sadly, are viewed more as quaint ideas from a bygone era than they are rallying cries.

If it’s not easy, shiny and packaged in a tweet with semi-nudity and a celebrity endorsement, many Americans simply aren’t interested. Unfortunately those people vote, and they love feeling like they’re part Neil Armstrong – involved in a first – with no more thought put into it than that.

As such, whoever ends up as the Republican nominee will have to run an uplifting campaign with a positive message we can vote for; not simply a “they’re awful and I’m not them” campaign. And, most importantly, they’re going to have to be able to message it, generally against the media grain.

That’s going to take a special candidate, one who may not exist. But the traits those in the current field possess contain all that is needed to win – just not in one person. If we were given access to the parts that make up the field, each would offer something important and unique to them that whoever the eventual nominee is will need.

The Brain: Ted Cruz, the only announced candidate so far, has the finest mind of anyone in politics. His knowledge of history, law and the Constitution are second to none.

The Resume: Scott Walker, governor of Wisconsin, has a conservative track record of victory. Winning three elections in four years while taking on unions, their minions and their millions, and standing throughout it all is something no one else in the field can claim.

The Biography: Dr. Ben Carson is the American Dream. He is the personification of your life being what you make it, that effort, determination and skill can overcome any obstacles. His life story is conservatism.

The Record: Former Texas Gov. Rick Perry. More jobs created in Texas in Obama’s economy than the rest of the country combined. Democrats try to claim credit for those jobs, but that would require the president to have had a secret Texas-centered agenda, and we know that is not the case.

The Attitude: New Jersey Gov. Chris Christie. Like Newt Gingrich in 2012, Christie isn’t going to take stupid questions from journalists or bother trying to answer them. Better yet, he calls “BS” on BS questions. All candidates at every level need more of that spirit.

The Ego: Donald Trump. Whether he’s a serious candidate or a clown car in a $10,000 suit is a question for another time. What he is is something desperately needed in a time when rich liberals hypocritically whine about income inequality: an unabashed capitalist. No one is poor because someone else is rich, and Trump is rich and proudly so. And that pride is not only justified, it’s needed to counteract the left’s destructive “the system is rigged” mantra.

The Charm: Sen. Marco Rubio. The guy can deliver a speech and give the impression he’s talking to you. It doesn’t matter if you like him or not, he has an ability to connect with an audience, regardless of size, on an individual level.

The Spirit: Carly Fiorina. While Democrats will fall in line behind a woman worth more than $100 million, who is where she is because of her last name, Fiorina literally went from being a secretary to being the CEO of one of the largest companies in the world. She’s not a victim seeking the sympathy vote, or someone who has been praised for being a concept more than having accomplishments. She is who you want your daughter to grow up and become.

The Personality: Sen. Rand Paul. Paul is principled, but he’s also someone you’d want to have a beer with. As superficial as it sounds (and it is), the “beer test” matters. You not only have to have a great message, which Paul does, you also have to be someone Americans want to hear it from without being bored or feeling condescended to. And an ability to laugh, particularly at yourself, helps immeasurably in that respect.

If the nominee can co-opt the positive traits of the other contenders, we should have a Republican president in 2017. The makings of a great candidate are in the Republican field. What happens between now and votes being cast, who learns and adapts the positive traits needed, remains to be seen. But I really want to see it.

P.S. These are some of the positive attributes of these candidates, but it’s not all wine and roses. In Sunday’s column I’ll look at the problems each will have to overcome to have a shot at winning.