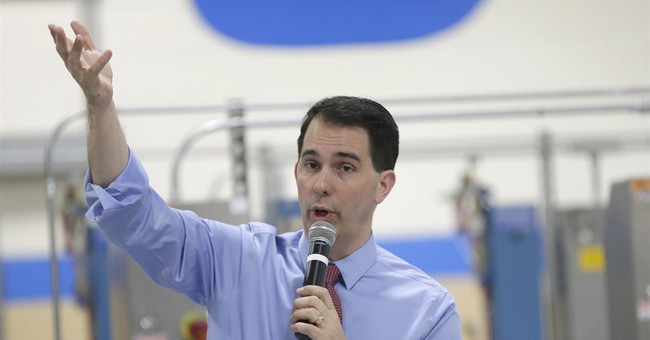 Breitbart’s Matthew Boyle had himself a scoop – Wisconsin Gov. Scott Walker hired someone to run his social media campaign who disagrees with him on some issues.

Yeah, that’s really about it.

Who was “firing” at Walker? It would seem to be Boyle. He does interview an Iowa radio host named Steve Deace, but it’s unclear if Boyle contacted him or the other way around. Either way, who cares?

Walker hired Liz Mair to be social media director for his “campaign in waiting,” which is quite common in this part of an election cycle. So what’s the controversy? Mair, it seems, has different positions than Walker on immigration, gay marriage and abortion.

Having been a press secretary in the U.S. Senate, I didn’t always agree with the votes my boss, Sen. Conrad Burns, R-Mont., made, but it was my job to sell them.

Sen. Burns had an open door policy where I or anyone on his staff who was interested in talking with him about bills could. Many times I spoke with him about upcoming votes, feeling him out in preparation for the work the communications team always faces after a vote, and sometimes I made the counter-argument to where he was leaning.

Whether or how often I may have been successful is private, but he always listened and engaged. But once the vote was cast, I had to sell it. That was my job. He was elected; I was not. He knew what he believed and what was best for Montana; I was a kid from Michigan with my own ideas.

But I always sold it – and him – as if he were right because he was my boss and that was my job. You would never know when I disagreed because I had a job to do.

That someone who disagrees with candidates or elected officials can’t be trusted to be on their team is the sort of naivety that comes from living life in a bubble.

There is no one, and I mean no one, you agree with 100 percent of the time. Campaigns are long, hard slogs. You have to have staffers you can trust to do their job, do it well and leave their personal beliefs at the door.

I know Liz Mair a little. I wouldn’t call her a friend, but we are friendly. What I do know about her is she is a professional and excellent at her job. To be subjected to this sort of stupidity under the guise of “news” is an insult not just to her and Gov. Walker, but to every campaign and campaign worker.

Worse, this hit job is sloppy. Boyle and Deace demand answers from Walker on immigration, then extensively quote the governor on the subject. That he hasn’t yet answered their questions means he’s dodging on the issue.

Maybe Boyle is on to something here, and maybe Deace is the king of radio in Iowa, but so what? It doesn’t justify this sort of lazy, sloppy hissy-fit against someone whose only sin appears to be disagreeing with them. When the votes are being cast in November 2016, Mair will pull the lever for the same candidate those two will. And in the end, that’s all that really matters, isn’t it?

If Boyle and Deace want to be held to their own standards, maybe they should answer how they can vote for someone who will get the vote of a pro-amnesty, pro-gay marriage, pro-abortion woman? When will they answer that question?

They won’t, and they don’t have to because it is recognized as being a stupid question.

As if to double-down on that stupid question, the next day Boyle took another swipe at Mair (it seems personal). He attacked her and Walker for her having dual citizenship, U.S. and UK. It’s nothing she’s hidden, but Boyle treats it as though he’s discovered a new element. He burns a lot of calories and words attacking Mair for this, then shifts back to “The real story behind Mair here, however, is where Walker really stands on immigration.”

No, it’s not, Matt. The real story is your judgment. Andrew Breitbart was no fan of circular firing squads or purity tests. Andrew knew the most important thing in electoral politics was to win. Boyle seems to have missed this important lesson.

Acting again as the arbiter of who is worthy of running for the GOP nomination, Boyle writes, “If Walker’s going to make a bid for the White House—all the liberal media bashing of him aside—he’s going to have to have well-thought-out positions on these issues rather than just rhetoric.”

True, but dumb. It’s March. No campaign has been announced. And, quite frankly, Walker owes Boyle no answer to any questions. As much as he’d like to think otherwise, Boyle is the gatekeeper to nothing. The road to the GOP nomination does not go through him or any other writer, no matter how forcefully they try to throw themselves in the middle of it.

Liz Mair has worked for many successful conservative candidates, including former Texas Gov. Rick Perry and Scott Walker during his recall election. Does Perry pass Boyle’s purity test? What is his purity test? From his embarrassing temper tantrum this week it seems to be a willingness to bow to Boyle’s demands for comments and interviews whenever the urge hits him. I don’t know what you call that, but it’s not journalism.

Late Tuesday night Boyle got his scalp. Mair resigned from Walker’s campaign. I assume he’s proud of himself, but I know Andrew Breitbart wouldn’t be.

By the way, the Iowa Caucuses aren’t exactly a crystal ball into the future of the GOP nomination. Former Sen. Rick Santorum won it last time around, former Arkansas Gov. Mike Huckabee the time before that. Remember their general election campaigns?

That Mair mocked Iowa and its place in the nominating process is not unique to her, nor is the outrage from the Iowa GOP who called for her head. For all the “conservative bona fides” Boyle and Deace grant Iowa caucus voters, it’s important to remember the state voted for the eventual Republican nominee only three times since 1976 when there was no unopposed incumbent in the race. They even chose George H.W. Bush over Ronald Reagan in 1980.

Maybe the Iowa GOP should focus more on winning their state in the general election, and less on campaign staff…