How To “Fix” The Super Bowl 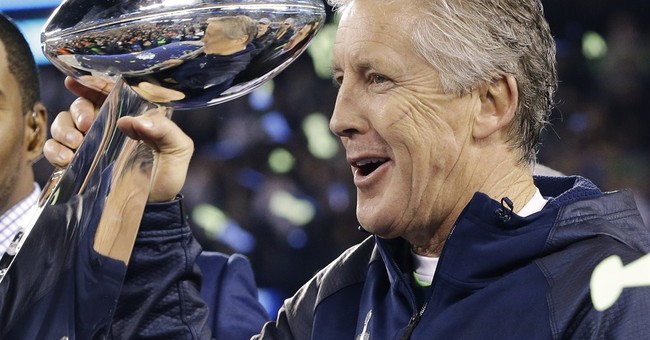 (I know I normally write about politics, and if you want to read about that I suggest you check out my column from Thursday on the climate change hoax. It’s pretty good and has some good jokes in it.)

I have to start out by saying there isn’t anything wrong with it, but the Super Bowl could be better. Yes, it’s been a rough year for the NFL…in every way except the bottom line. The wallets are full, but the reputation is damaged. That will fade over time, but the biggest day in sports is now almost an afterthought this year.

Do you know anyone who isn’t a fan of the Patriots or the Seahawks who cares about today’s game? The actual game, not the event that involves beer drinking, wing consumption, commercials and the halftime show. Deflate-gate has, and forgive the pun, sucked all the oxygen out of the game itself.

Maybe it’s because the Seahawks won last year and the Patriots have won too many times in recent years, but the game has no excitement or drama attached to it. America knows most of these players, so any “human interest” stories about someone who was an undrafted homeless junkie just a few years ago but is now playing in the Super Bowl are already known.

Since most people who don’t have money on it don’t care about the game itself, but the event, why not move it to Saturday? Having the Super Bowl on Sunday only happens because that’s how it’s always been. It doesn’t have to be.

People have to work on Monday, so they have to choose between having a few beers with friends and staying out late or leaving before it’s over. Who stays at a Super Bowl party after the game is over? If the game is on Saturday, a Super Bowl party is an actual party. The game ends at 10, and everyone can watch the game and even hang out after.

It makes sense from the standpoint of advertisers too. People will watch no matter when the game is, so you won’t lose overall audience. But if one team is up by 27 points halfway through the third quarter, a large percentage of the crowd is heading home because they have to work tomorrow. So who wants to pay $4 million for a 30-second ad in the fourth quarter on the off chance you’ll still have a large enough audience to justify it? A Saturday game ends that.

The fans are happy and the advertisers are happy. Plus, with no rush to get to bed, the ads in the post-game show increase in price.

There’s no Monday hangover and production loss/sick days taken after the game. It’s win-win! The NFL needs some good press; a Saturday “Super Bowl L” next year makes that happen.

I know traditionalists are screaming at their computers right now that “it’s TRADITION!” and angry at the thought. Traditions are great, but the Super Bowl is a game and professional sports are a business.

Super Bowls started out as day games. The first one kicked off at 4:15 Eastern, the second was at 3:05. It wasn’t till Super Bowl XII that the game was played in prime time. Yes, 12 is different from 50, but so what?

Think of the boon to businesses. Bars and restaurants would be packed on Super Bowl Saturday. And offices, construction sites and every other business wouldn’t be packed with unproductive zombies on Monday.

I’ve heard it suggested that the game either be moved to the weekend of Martin Luther King Day or President’s Day, but Sundays still have the feeling of a “school night” even with a Monday off. Saturday just makes more sense than any other option.

I’m not someone who says, “traditions were made to be broken” -- at least not very often. But the Super Bowl is a game, a business. It’s a game and a business that draws more people to it than anything else on TV. In years very few people care about the game itself compared to the event, a Saturday game is the smart play.

I grew up in Detroit, so not only do I not have a dog in this fight, I’ve rarely had a puppy in the playoffs. I like to say that Detroit doesn’t have a professional football team, we only have the Lions. But I do watch the playoffs and I make a point to watch the Super Bowl.

It would be so much more enjoyable to do that on a Saturday night with friends and no one looking at the clock, judging how long they will stay based on the game and the fact that they have to be up early the next day. I don’t think I’m alone in that.