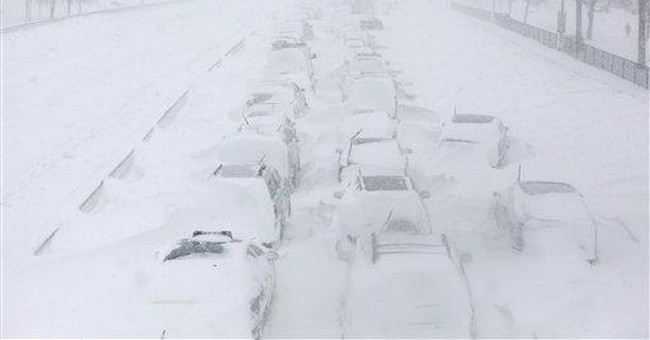 Were you hit this week by all the climate change? We here in the Baltimore/Washington area received just a light dusting, but Boston was covered in it. Actually, thanks to the mainstream media, the whole nation was covered in climate change. The only thing missing from the coverage was any proof, but that doesn’t stop the alarmists.

The science is indeed settled: No one knows what’s going on with the climate, and anyone who tells you otherwise is selling something … or angling for a government grant.

This week gave us more examples of just how clueless and dedicated the devout members of the Holy Church of Global Warming truly are. Their dedication makes Jehovah’s Witnesses seem like magazine salesmen not working on commission and Scientologists casual fans of the science fiction of L. Ron Hubbard. In other words, come hell or high water (or the lack of high water), they’re in for the long haul.

For a group of people who claim to be dedicated to “science,” they invoke the word an awful lot with nothing more than their hope and a failed sixth sense to back it up. It’s like they have Tourette syndrome, but instead of swearing or making some random noise, they yell “SCIENCE!”

On the verge of the great snow storm that wasn’t, the word “science” was used so often to sell alleged climate change as the cause of the storm – rather than, say, the fact it is winter – that you easily could’ve thought Tomas Dolby was experiencing a revival to end all revivals. But instead of being blinded by science or snow, they were blindsided by yet another dose of reality.

Bill Nye “the Mechanical Engineering Guy” (that is, after all, what his degree is in. He’s not a scientist, he’s a failed actor who was cast as “the Science Guy” for a local TV show after failing as a comedian) was on MSNBC the day the “SNOlyCrap” storm was scheduled to devastate New York City.

Nye said, “Everybody, I want to introduce the idea that this storm is connected to climate change. I want to introduce that idea. I know there will be certain viewers who will become almost unglued, throwing things at their television set and so on. But the economic effect of storms like this is huge. You can’t cancel half the flights out of one of the world’s busiest airports … certainly the eastern seaboard is a very busy area economically for airplane travel. And so when you start having these big storms and you don’t have the infrastructure to deal with it, you’re costing your society a lot of money. And we’re in the developed world where we can handle this stuff. So I just want to introduce the idea that the strong winds that we had in southern California, the very strong winds that will be associated with this storm in the next couple days, these could be connected to climate change.”

Ladies and Gentlemen: I give you “SCIENCE!”

Nye, in a third-grade incoherent rambling sort of way, was doing what good progressives do, whether they play a scientist on NBC News shows or not, and that is blame anything weather related on climate change.

Nye wasn’t done. He went on to say “Proving any one storm is connected, especially cold weather events, is quite difficult. But I just wanted to present that.” Again, SCIENCE!

Nye, or anyone really, easily can make that claim on any NBC News program because there will be no questioning, only an “Amen chorus” of sock-puppet true believers nodding along like a dashboard full of bobbleheads as you drive down a dirt road.

No one thought to question Nye, or even point out the fact that the forecast was calling for snow in the northeast in late January and those might be factors as well. Nope, didn’t come up. It was climate change. And, of course, the only thing that can save us from such events in the future is ceding massive amounts of our money and liberty to the federal government, obviously.

But Nye wasn’t the only person on MSNBC playing scientist in the build-up to the storm that wasn’t. MSNBC contributor Jeffrey Sachs was on to make another asinine claim.

Alex Wagner set the ball on the tee in a way only an MSNBC personality can. She described things that hadn’t yet happened (and eventually wouldn’t) as if they’d already come to pass and were etched-in-stone fact. Referring to the storm that didn’t come as an “historic snowfall,” Wagner asked, “How -- is there an interrelation between extreme heat and extreme cold, extremely erratic storms?” (Erratic storms? Are there well-behaved storms that do only what they’re told?”)

Sachs, an economist and not a scientist, responded with an “Amen!” by giving the highly scientific answer of “Certainly scientists think so.” He continued, “And the scientists say that there are two big reasons why we're getting mega storms such as the big rainfalls in spring and summer and bigger snowstorms in the winter. With warmer temperature, the air holds more moisture in general and second, the oceans are really warm right now. That means that extra amount of precipitation in the warmer air over the oceans.”

Last year “scientists” were telling us to prepare for the “end of snow,” but now they’re saying we’re going to get more of it…and for the exact same reason. Just like after Katrina we were told by the true believers that there would more frequent and bigger storms just like it and they didn’t happen.

Sachs continued, “So the scientists are saying that while again you can never be sure of any particular storm, we should be expecting this kind of trend.” The kind of trend that sees rain in the spring and summer and snow in the winter? That screeching you just heard is the sound of the presses beings stopped.

Then Sachs said he’d asked a colleague “what the record is for mega snowfalls. He points out that since record keeping started in 1869, five of the 10 biggest snowstorms have come since 2003. So suggests that we're seeing a lot more of this kind of extreme event.” The only problem is it’s not true.

Apparently the “scientists” at Columbia University’s “Earth Institute,” which Sachs runs, don’t have access to Google. I do, and I used it to easily disprove that lie. No matter how you slice it, it’s not true.

But again, MSNBC is bobbleheads on a dirt road.

The climate change true believers have been singing the same old song for decades now, all the way back to when it was the coming ice age they were warning about. Only now, after being burned by doom-and-gloom predictions that didn’t come to pass in the “global warming” phase, they’ve learned the lessons of other doomsday cults – never make predictions for within the lifetime of anyone alive now.

If someone tells you the planet will come to an end next Tuesday, on Wednesday they’re going to have some explaining to do. Just like all the predictions 20 years ago about how we only had 10 years to act or the planet would be devastated and nearly destroyed, of Al Gore’s “we won’t have polar ice caps in seven years” claim made eight years ago (we still have them and they’re doing just fine). If you make predictions for the near future, when they don’t happen people will start to question your clairvoyance.

So the climate change cultists have smartly switched their game – they now make predictions for doom and gloom happening long after everyone alive today will have died. There’s no way to prove what will happen in 100 years, but more importantly to this doomsday cult, there’s no way to disprove it either. And, they add, wouldn’t you really rather err on the side of caution? After all, what about the children?

Just like “jobs saved or created” can’t be proven, it can’t be disproven either. And with the media firmly in the “true believer” camp, there’s really no one to point out these paradoxes.

So the day after Bruce Willis and Ben Affleck blew up the asteroid containing “Snowmageddon” and saved the east coast, Boston was digging itself out from under what it has been digging itself out from under in every winter since Boston was founded. The rest of the country remains buried deep under a pile of “science” that smells an awful lot like BS.