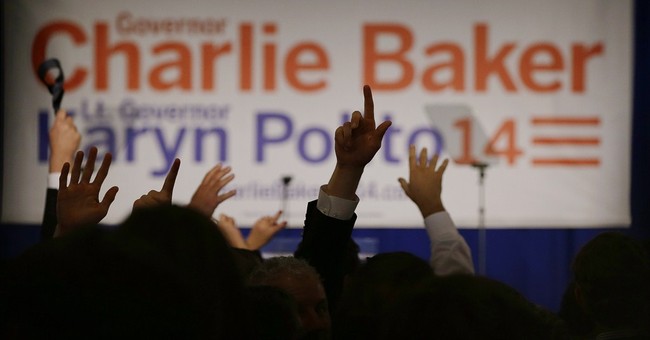 Massachusetts? Maryland? MARYLAND?!?! Forget the Senate for a minute, or the massive Republican majority in the House, and think about the fact that Republicans did so well in the gubernatorial races across the country.

In Michigan, after passing a “Right-To-Work” law, Gov. Rick Snyder wins handily. Union money and muscle plus President Obama campaigning against him couldn’t sink a man with the Twitter handle @OneToughNerd.

Speaking of unions, no one had a bigger target placed on their back by the unions than Wisconsin Gov. Scott Walker. For the third time in four years, he beat them. And, since so much of politics is about trends, Walker has beaten the progressive machine in that blue state by a larger margin each time. That phone ringing in the background is 2016 calling…it just wants to talk.

Republican Charlie Baker beat Democrat Martha Coakley in Massachusetts. Outgoing Governor Deval Patrick has been touted as a future player on the national stage, but his leaving the keys to the governor’s mansion in the hands of a Republican tarnishes that shining future.

Speaking of tarnishing future plans, soon-to-be-ex-Gov. Martin O’Malley in Maryland (you have no idea how much I enjoy typing that) will have to hand the keys to the governor’s mansion there to Republican Larry Hogan. Democrats had a more than 2:1 voter registration advantage over Republicans – there are more Democrats in Maryland than Republicans and independents COMBINED. Yet O’Malley’s record and his machine couldn’t help his lieutenant governor, Anthony Brown, across the finish line. The shock here cannot be overstated.

Even in Florida, where Democrats were sure they had a tap-in putt when it came to defeating Republican incumbent Rick Scott, they lost. Not sure what it says about the state of the Florida Democratic Party that the best candidate it could find was Charlie Crist, a former Republican nobody particularly likes. But I’m sure it’s not good.

In Kansas, Democrats were sure to beat Republican Sam Brownback. They didn’t.

In Texas…well, come on. The only consolation for Wendy Davis is she got more votes than MSNBC has viewers, so when they finally fire Ronan Farrow she can boast of a larger possible audience than the network currently has.

There were so many victories Tuesday that it’s hard to pick which football to spike (it’s currently 2:30 am, so they’re still coming fast and furious).

The Republicans took the Senate and are projected to have up to 250 seats in the House. That’s just jaw dropping.

I was publicly hopeful, but I’m a pessimist by nature, so I never like to celebrate before the clock reads :00. Well, it reads :00.

The president undoubtedly will not care about these results. He didn’t let the Republican wave in 2010 stand in his way. Why would he care what the people have to say now? But Democrats in general will develop a newfound respect for the word “compromise.” The prospect of working with people they’ve completely shut out for eight years becomes appealing when irrelevancy is staring you in the face.

Whoever Republicans elect to be Senate Majority Leader, and it will probably be Mitch McConnell, should march into Harry Reid’s soon-to-be-former office, pick up all the bills Republicans sent over from the House and start calling them up for votes.

Every bill that comes out of Congress should have warm and fuzzy names, no matter what they do. The “Hug Everyone Act,” the “Jobs For Americans Act,” the “Chicken In Every Pot Act” – whatever. Force the Democrats and the media to report how they’re blocking these wonderful sounding bills, or the president is vetoing them.

In other words, play the game the way Democrats have been playing it.

Not a lot is going to get done in the next two years, and that’s just about the best outcome for liberty. Forcing votes and/or vetoes on popular and “nice-sounding” legislation, coupled with Congressional Budget Office scores showing how they will benefit the country, will be the best ammunition against anything progressives have in store for 2016. And that’s the goal.

Tuesday was a great and historic night, but it wasn’t a finish line. Righting the ship of state is a marathon, not a sprint. So enjoy the moment, tip an adult beverage, take the weekend to celebrate and breathe a sign of relief…then sharpen your elbows and get back in the fight. Progressives never, ever stop, and neither can we.