Have Some Fun With Progressives This Independence Day 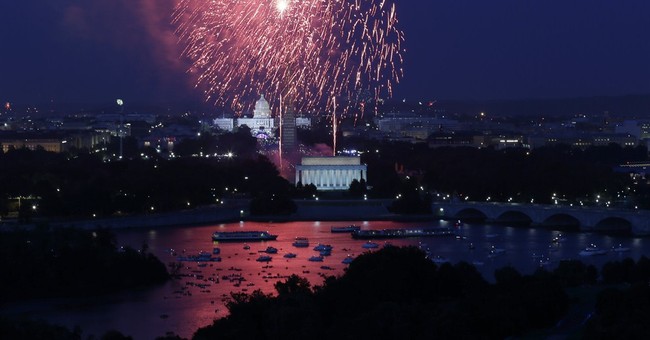 As you prepare to celebrate Independence Day, I thought I’d take this opportunity, while it still exists, to mock our progressive friends. You can spot them at your barbecue. They’re the ones who brought the tofu hockey pucks they call veggie-burgers, the 6-pack of micro-brew beer they keep in a small cooler that never leaves their side so no one can grab one – as if anyone would – and smoking American Spirit cigarettes. They also haven’t showered in a while, so the flies are a dead giveaway.

When you come across these tolerant people gleefully judging everyone to be their intellectual inferior, here’s some fun things to throw their way.

1). Bring your barbecue/beer supplies in a Hobby Lobby bag. They will think you’re worse than Hitler, then set about telling you what the president should do, which will boil down to bypassing the “do-nothing Congress.” Mention the literally hundreds of bills passed by the House currently sitting on Harry Reid’s desk gathering dust and watch their face. It will be like watching a puppy trying to figure out what a remote-control car is. They won’t be able to comprehend reality since it’s never represented on MSNBC. Their face will go blank. Their head tilt to the side, and they’ll revert to talking points. When that 25 seconds is up, they’ll call you a racist and a bully and storm away, explaining how they can’t even talk to someone so ignorant.

2). Bring up the Founding Fathers. Nothing gets a progressive more upset than talk of the men who founded our amazing nation. Their view of our Founding Fathers is split into two camps: 1) Those exemplified by a line in the great movie Dazed and Confused, when a teacher says “OK guys, one more thing: This summer when you're being inundated with all this American bicentennial Fourth Of July brouhaha, don't forget what you're celebrating, and that's the fact that a bunch of slave-owning, aristocratic, white males didn't want to pay their taxes.” And 2) Those who claim the Founding Fathers were progressives and loyalists were conservatives.

Both claims express an elementary school-level understanding of history, if that. But we’re dealing with progressives here, so I repeat myself.

Dealing with either claim is fruitless. They’ve made it this far in life repelling reality. Your best efforts, no matter how well reasoned, won’t make a dent in their ignorance armor. But much like a firecracker becomes fun once you light the wick, a progressive is a carnival ride when you bring up the Founding Fathers. Light the fuse, step back a safe distance and enjoy the show. There are few things more fun than inciting progressives to expose themselves in front of smart but otherwise unengaged people. The faces of others will be priceless. Then you will all be called racists and the progressive will storm away.

3). Mention you support the Second Amendment. You could sleep with a progressive’s girlfriend while kicking his dog and pouring sugar in the gas tank of his Prius and he wouldn’t be as upset as he will be when confronted by someone who supports the right to keep and bear arms. When they go off, and they will go off, and mention “assault weapons,” ask them what that means. They won’t understand the question because they’ve never been challenged to explain this, so they’ll probably blurt out something about machine guns or automatic weapons. But what they really mean is guns that look like the ones Bruce Willis or Sylvester Stallone used in a movie once.

From there it’s up to you. The options are limitless. Cajole them into saying how the right to bear arms applies only to guns available at the time so you can counter with how that logic means freedom of speech applies only to the spoken word, quill and printing press, since that’s what was available at the time. Or steer them into a discussion of self-defense, which drives them crazy. Light the fuse, then enjoy the show. At least until they call everyone a racist and storm out of the party.

Those are just three possibilities for fun with progressives this Independence Day, but the possibilities are endless. Don’t have a lighter to start the charcoal? Use gender specific pronouns and watch the sparks fly. Need to put out those smoldering coals? Wait for them to take a drink and say “God bless Ronald Reagan” and the resulting spit-take would extinguish a forest fire. Want to see a human being spontaneously combust? Mention how you don’t believe in manmade global warming, and that the “hottest” month on record has been switched back to July 1936 – AKA “the year of the SUV” – and cover your plate.

If none of that is your cup of meat, but you still want to find an easy and fun way to mess with a progressive and let them know their agenda has failed, simply mention that you love the United States of America. Their tears may become a bit much after the first hour, but it will make the subsequent accusation of racism that much funnier.