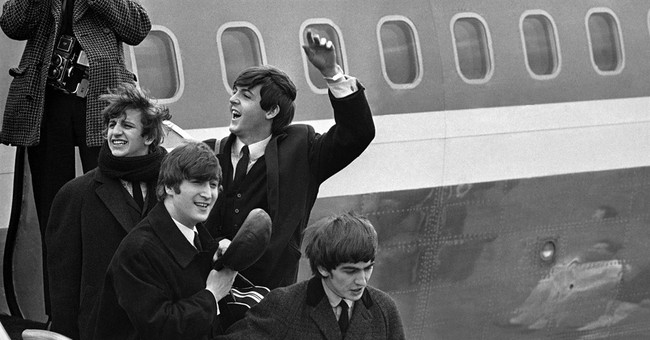 Fifty years ago today, Feb. 9, 1964, the Beatles appeared on The Ed Sullivan Show. If you were alive at the time, odds are you watched it. If, like me, you weren’t, odds are higher you’ve heard about it. It, not Pearl Harbor, not the assassination of President Kennedy, was the first “universal moment” of the modern age. On that Sunday night, more people experienced a single event simultaneously than ever had before.

The news of Pearl Harbor spread via newspapers and radio. People found out about it over a period of hours. News of the assassination of JFK was the same way because it took place on a weekday during work hours. Word of mouth was how most people found out about those events because they were going about their daily lives, and the events obviously were not planned. But that Sunday night was something different.

More than 73 million people in a nation of 191 million watched that show. If you remove people too old to care or too young to know, the percentage of Americans who watched that night has never been matched. It was the first, and possibly the largest, shared event in human history. And it birthed, whether you think for good or bad, the modern era of pop culture.

Most generations shift gradually and aren’t recognized until the clarity of hindsight is available. But The Beatles on Ed Sullivan marked the arrival of the baby boomers like nothing before or since. The first wave of boomers were in the heart of their teens and, after the last pre-World War II generation experienced the birth of rock and roll, things were never the same.

Rock and roll burst on the scene in the mid-‘50s, but it almost ended in 1959-1960. Elvis was drafted and gone from the scene. Buddy Holly, the Big Bopper and Ritchie Valens died in a plane crash. Eddie Cochran died in a car accident. Little Richard quit to join the ministry. Chuck Berry was in prison for violating the Mann Act. And Jerry Lee Lewis was ostracized for marrying his 13-year-old cousin. The founders and faces of rock and roll were gone.

What followed was a corporate crooner, very “safe” era of “rock” with Pat Boone, Frankie Valli and others leading the way. Nothing against them and their peers, but although they were called rock and roll, they weren’t. They were parent-friendly pop.

John, Paul, George and Ringo were not “overnight sensations” by any means. They spent years honing their talents as musicians and performers, toiling for little to no pay in Liverpool and Hamburg, Germany. Ringo was with another band in the beginning, but that band played the same clubs as the Beatles at the time. Those 8- to 12-hour days in beer-soaked, smoke-filled clubs must have seemed thankless at the time, but they afforded them the skills needed to sharpen their identities as musicians and songwriters.

Most people don’t realize that before the Beatles, most singers and groups didn’t write their own songs. (A notable exception was the great Buddy Holly.) Rock and rollers played covers of old blues songs or recorded songs written for them by professional songwriters. Artists and songs were chosen. It was packaged. It was approved.

The Beatles changed that.

The writing team of Lennon and McCartney wrote songs for people of their age, of their time (which turned out to be timeless). Before they hit that CBS stage, as Grantland’s Chuck Klosterman pointed out to me in an interview, the concept of a “teenager” wasn’t widely thought of. They were “juveniles” until they were adults, and once they were adults there was no time for juvenile pursuits. Beatles fans, and more broadly British Invasion fans, carved out their own identity and the teenager was born.

One question I’ve often pondered about this pivotal moment in pop culture history: Could any other British band have led the invasion, or did it have to be the Beatles?

This past Friday I did a special show on The Beatles and the Ed Sullivan Show and posed that question to music journalist David Wild, British invader Peter Noone of Herman’s Hermits, and Fox News Channel’s and Paul McCartney jam band member (you’ll have to listen to the clip for that story) James Rosen and the decision was unanimous – it absolutely had to have been the Beatles.

Say what you will about the Rolling Stones, Led Zeppelin, The Who, or any of the bands that came after, The Beatles had to be the tip of that talent-rich spear for a reason. They were special not only for what they did together, but who they were individually.

The Beatles were each charming, smart, funny and, perhaps most importantly, self-deprecating in their humor. The media at their first press conference was hostile. They didn’t want to be there. They were serious journalists sent by their assignment editors to cover something in which they had no interest. Music journalism didn’t yet exist.

By the end of that encounter – through their charm and humor – John, Paul, George and Ringo had won them over. Maybe not to their music, but to them personally.

As an aside, though they were painted as rivals in the press, the Beatles and Stones were great friends. The Stones’ first hit was “I Wanna Be Your Man,” which was written for them by John Lennon and Paul McCartney (only later was it recorded by the Beatles). What Lennon and McCartney did writing their own songs inspired Jagger and Richards to start writing. Without them, the Rolling Stones as we know them wouldn’t exist.

No one, not even the Beatles themselves, could have foreseen the change that was to come. Their music is just as relevant and vibrant as it was the first time it was played, and their ripples of influence reverberate as strongly today as they did when they were together. The world dropped the needle on the soundtrack for life since at 8 p.m., Eastern time, 50 years ago today. Love them or hate them, you can’t deny them.

I wasn’t alive when they were recording together, and I was too young to remember John Lennon’s murder. I came to this party late. But I’m glad I came, and I’m glad this party happened. And I will forever be grateful the Beatles threw it, because they were the only band that could have.

And 50 years later, our ears are better off for it having been them.