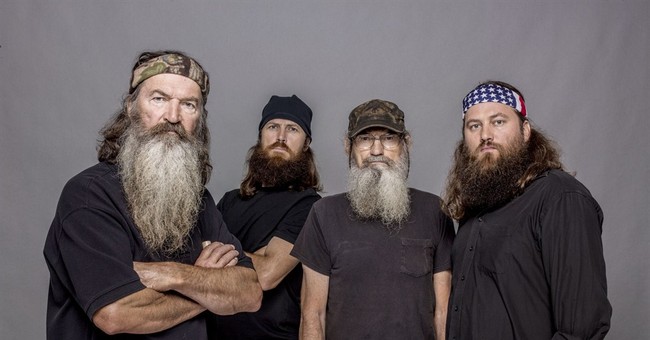 I’m not a fan of Duck Dynasty. There, I said it. I know that’s not something a conservative is supposed to say because we’re all stereotypes in the eyes of progressives, but I had to unburden myself of that. It’s nothing personal, it’s just, to steal a line from Bob Dylan, not my cup of meat. So when I first heard the story that Robertson patriarch Phil made “anti-gay remarks,” I didn’t really care. Most Americans didn’t care either. But, as my friend Erick Erickson says, “You will be made to care.”

The Robertsons are Christians, like most Americans. But unlike most Americans who answer polls about their faith, the Robertsons mean it. That makes them a threat to progressives. Anyone anywhere who puts something, especially God, ahead of the progressive agenda of government dominance over the individual, particularly when that person has a platform to expose others to it, must be destroyed. It’s now progressives roll.

Within hours of Phil Robertson’s crude paraphrasing of widely known Christian doctrine, A & E (the network that airs Duck Dynasty) announced it had suspended him from the show “indefinitely.”

Robertson didn’t pick up a gun and start shooting gay people. Mass shootings and violence are staples of the progressive left, not conservatives. So why must he be punished?

GLAAD, the progressive sub-set organization designated to be offended on behalf of gays and awarded media credibility as “the voice” of gay Americans (like CAIR is for Arabs, NAACP is for blacks, La Raza is for Hispanics, etc., etc.) chimed in immediately.

“Phil and his family claim to be Christian, but Phil's lies about an entire community fly in the face of what true Christians believe,” said GLAAD spokesman and noted Biblical scholar Wilson Cruz. I’m no theologian, but I’m pretty sure the Bible is against sex with anyone you’re not married to, so forgive me if I take Cruz’s word with a grain of self-serving salt.

Once the suspension was announced Cruz retorted, “By taking quick action and removing Robertson from future filming, A&E has sent a strong message that discrimination is neither a Christian nor an American value.”

Forgive my ignorance, but what discrimination?

Phil Robertson expressed a personal belief based on his religious faith. He harmed no one. He suggested harming no one. What discrimination did he commit?

For his words, Phil Robertson has been labeled “anti-gay” and “intolerant.” Those labeling him have routinely mocked him as ignorant, stupid, a redneck, hillbilly, trash and pretty much every pejorative you can think of to describe someone of his background. How tolerant.

Tolerance is a one-way street, and it has nothing to do with tolerance at all.

Merriam-Webster defines tolerance as “sympathy or indulgence for beliefs or practices differing from or conflicting with one's own” and “the act of allowing something : toleration.” Since Phil Robertson did not harm anyone nor call for anyone to be harmed, but rather simply stated his religious belief that homosexuality is a sin, he has conformed perfectly with the actual definition of “tolerance.”

Progressives are offended by what he said, but, in all sincerity, who gives a damn?

In a few short decades we’ve transformed from a nation of Americans who laughed at Richard Pryor, George Carlin, Airplane! and Mel Brooks movies to a nation overrun with hyphenates, self-segregated subsets and adult children with fragile psyches who demand any perceived affront be remedied immediately in a manner they so choose. Essentially, we’re being ruled by the whims of a temper tantrum.

We have gone from the Land of the Free to the family living in fear in the Twilight Zone episode “It’s a Good Life.” Upset the child with enormous powers and be thought out of existence.

I’m generally indifferent on so-called “gay issues.” I don’t care what anyone does in their personal lives as long as whoever they do it with is old enough and willing. I oppose gay marriage on grounds of language, not morality. On the issue of sin – it’s not government’s job and they can explain their lives to God, as I’ll have to explain mine. But fascism is fascism, and it has to stop.

It has to stop not only from gay groups, but from every progressive victim-porn peddler organization. And for their own good, too. If they care at all, and I mean really care, about the causes they claim to fight for, crying “wolf” will serve only to numb the public to real affronts to individuals by others.

The incessant cries of racism by progressives on MSNBC to any policy critique of the president has done more damage to victims of racism than all those southern Democrat Party Klansmen ever did. By making the word mean anything, they make it mean nothing, and real racism is met with a collective “here we go again.”

This won’t happen, of course, because although diluting real victims of bigotry with political ploys harms people, it’s great for fundraising. And therein lies the rub.

How about we all agree on a simple, basic principle: We won’t care what you do in your private life and you extend the same courtesy to our minds.

This deal will never, and can never, be accepted by progressives because your mind is the most dangerous obstacle their agenda faces. As long as you are able and allowed to think for yourself, they can’t fully win. If people are exposed to the ideals and values of the Robertsons, they will be reminded that the keys to success and happiness lie not in government but in family. If they don’t, we’ll all be “ducked” one day.