Obama To Media: Support the Stop Me Before I Kill Again Act 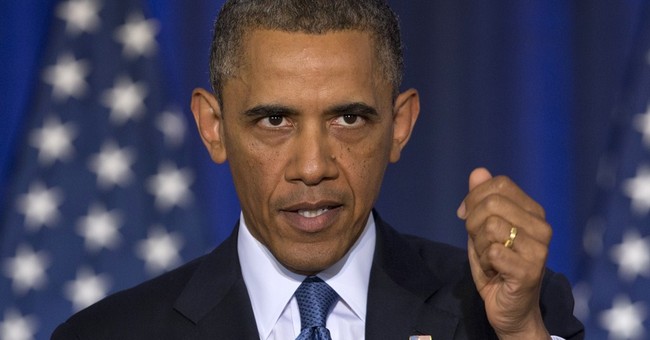 In the original Die Hard movie, John McClane is desperately trying to get the police to notice terrorists have taken over Nakatomi Tower. He’s already pulled the fire alarm and called 911, but no one had taken him seriously. Finally, an officer is dispatched to check it out and, after a half-hearted look, he decides there’s nothing happening and starts to leave. It’s then McClane throws a terrorist’s body out a window and onto the hood of the patrol car and says the famous line, “Welcome to the party, pal!”

That character, Sgt. Al Powell, would recognize how the progressive mainstream media feels this week with the revelation the federal government, headed by their guy, attempted to criminalize what they do for a living by claiming Fox News reporter James Rosen was a “co-conspirator” to espionage for essentially doing his job, their jobs.

Hundreds of dead from the Obama administration’s Fast and Furious program didn’t interest the Democrat Media Complex. Neither did the cronyism of “green” loans to campaign donors or the illegal “recess appointments” to the National Labor Relations Board and Consumer Finance Protection Bureau. Neither did the president’s decision to refuse to enforce the immigration laws in any way other than cheering his implementation of the “DREAM Act” without it having been passed by Congress, or his choice to not defend the Defense of Marriage Act which, agree with it or not, is the law of the land.

There are many more scandals and abuses of power that would be 48-point headlines if the man in the White House had an R after his name instead of a D, and that’s before we even get to the disaster of Benghazi and the IRS targeting political opposition to the president. But now that the Obama administration has targeted their progressive media allies themselves, journalists suddenly have perked up a bit.

Welcome to the party, pal.

The subpoenaing of phone records of the Associated Press perked up their ears, but going after James Rosen’s records, including his personal email and parents’ phone records, finally seemed a bridge too far. To seize Rosen’s records, the government had to accuse him essentially of espionage against the country, which effectively criminalizes the act of investigative journalism. The Justice Department hasn’t pursued Rosen because the accusation was made only to gain access to his records, not build a criminal case against him. But the concept has put the fear of God into the hearts of journalists everywhere.

Most Washington reporters thought themselves immune to the pointy end of the stick because they were cheerleaders who were grateful for the carrot. But power knows no loyalty. They’d be less surprised by this purge if they’d learned from the history of left-wing purges of loyal lapdogs, but no victim ever thinks that which they cheer would turn on them.

For the liberal/progressive media, the timing of this story affords them special treatment. The harmonic convergence of Scandalpalooza means the president needs them on his side right now to cover (if not kiss) his flank, so he’s done a public mea culpa and is now calling for legislation to help them.

In his long, rambling speech that made a sneeze seem organized at the National Defense University on Thursday, President Obama said, “Journalists should not be at legal risk for doing their jobs. Our focus must be on those who break the law. That is why I have called on Congress to pass a media shield law to guard against government overreach.”

He said that line without the slightest acknowledgement it was his administration putting journalists at risk. The First Amendment used to be enough. “Congress shall make no law …” is not at all vague. But then, neither was “when the Senate is in session …” until recently.

President Obama was caught with his hand in someone else’s cookie jar and wants to blame the baker for not making them less delicious. He’s putting the onus on Congress to act to pass a law saying his administration can’t do what it already can’t do – but does. Stop me before I kill again.

Some hard-cases in the progressive media will forgive his sins and shift focus to Congress, but some will not. Once bitten, twice shy would apply had the mainstream media not seen its credibility decimated by the million little chomps it already has suffered.

Those chomps would have been forgiven had the news of this assault on the only constitutional amendment journalists care about – and the one part of it they like – not happened now. But it did.

Progressives will not put anything ahead of their agenda, except themselves. The ruling class in leftist regimes throughout history silently tolerated the oppression of others because they were “safe.” Once it became clear they had a target on their backs too, their tone changed. It takes only one small crack to bring down a dam. Will journalists continue to treat the president as a conquering hero or will they actually report honestly before he metaphorically “kills” a piece of the Constitution again?