Dennis Prager
|
Posted: Oct 23, 2018 12:01 AM
Share   Tweet
The opinions expressed by columnists are their own and do not necessarily represent the views of Townhall.com. 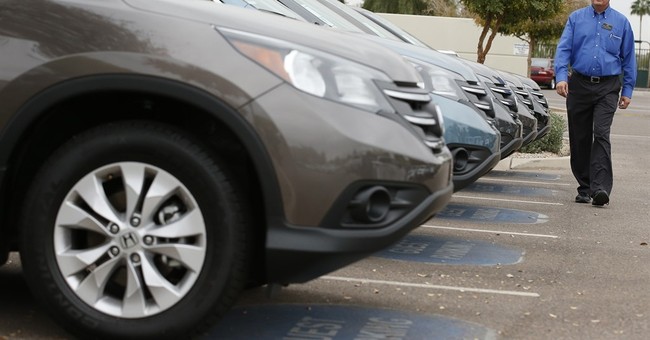 This past week, I went to five car dealers in an upper-middle-class suburb of Los Angeles to see what SUV I'd like to lease. I wanted to patronize local car dealers because I want them to stay in business.

In each case, I experienced the following: I was greeted pleasantly upon entering the dealership. A young salesperson asked if he or she could help me. I told the salesperson the model I was interested in. He or she made a copy of my driver's license and returned with a key to the car, and off we went.

In every instance, the salesperson was sweet, unenthusiastic and largely ignorant of the car in which I was interested.

All of them answered most of my questions -- such as "Is this SUV available in all-wheel-drive?" -- with some version of "l'll look it up."

I began car shopping many decades ago but have rarely gone to dealerships in the last 25 years (I generally drove the cars of advertisers on my radio show). My recollection of my experience in earlier days is that car salespeople (especially those of foreign cars) were car enthusiasts. They were passionate about cars in general and very knowledgeable about the particular cars they were selling.

But in every instance this past week, I felt I knew more about the car, from doing some research on the internet, than the salesperson did.

It seemed to both my wife and me that these car dealerships hired any decent young person who applied for a job, and that these young people regarded selling cars as no different from selling shoes: It's a job. It requires you to show up on time, be polite, accompany potential buyers on a test drive, look up answers to questions on your smartphone and go home at the end of the day. Their interest in cars was not necessarily greater than drug store employees' interest in hair brushes. Selling cars is just a way -- one of many others to come -- to pay the bills.

My wife saw in the answer "I'll look it up" one possible key to the problem: If the young people we interacted with this past week are representative of their generation, many do not feel the need to know much, because all the information they need in life can be found via Google.

I focused on another issue: While these young salespeople were unfailingly pleasant, none of them evinced passion.

I remember young (and old) car salesmen who loved cars. Sure, they would exaggerate a car's qualities, but they knew all about it -- inside and out. But this past week, not one of the salespeople said anything about the car during the test drive. Unless I asked questions, their only words were "Make a right at the next corner."

It makes me wonder what young people are passionate about in our time: favorite TV shows and actors? Music? Video games? Sports? Global warming?

If a 65-year-old salesman seems to be doing little more than going through the motions, we understand that perhaps we have met a modern-day Willy Loman. But a passionless 25-year-old? That's just sad.

Do the car dealerships know this? Do they care? At one time, the general critique of car dealers was they were too pushy. If my experience is at all typical, I can assure readers that pushiness is no longer a problem. The only thing any of the dealers pushed was free bottled water.

I am aware that every generation laments "In my time ..." But that doesn't necessarily invalidate what follows.

In my time, young guys -- I can speak with greater knowledge about men -- had hobbies/passions. And ambition.

If I were 25 years old and had a job selling cars, even if I had other aspirations for my life, I would still aim to be the best car salesman in America. That's what we refer to as ambition.

I would learn everything I could about the cars I sold. I would learn how to advocate for the cars without being pushy. During the test drives, I would say a lot more than where the customer should next turn. In addition to talking about the car, I would ask customers about themselves.

I detected little ambition in the sex previously known for professional ambition -- men. But no one should be surprised. Many young men have been coddled by parents and by society. If you receive a trophy just for playing, why try to win? If self-esteem is given to you without having to earn it, why try to earn it? If the government will take care of you, why work hard? Anyway, ambition in men is probably now considered a form of "toxic masculinity."

Perhaps most importantly, young men have been given the message that women have no need for the support of a man. Women, they have been told all their lives, are perfectly capable of taking care of themselves and any children they might have.

So, then, if the government will take care of you and your income is not necessary to support a family, why be ambitious? Why push yourself to succeed?

Talk to the young men in your life and ask them if they are ambitious. Don't be surprised if they answer "I'll look it up."