The Left and the Attack on Paris 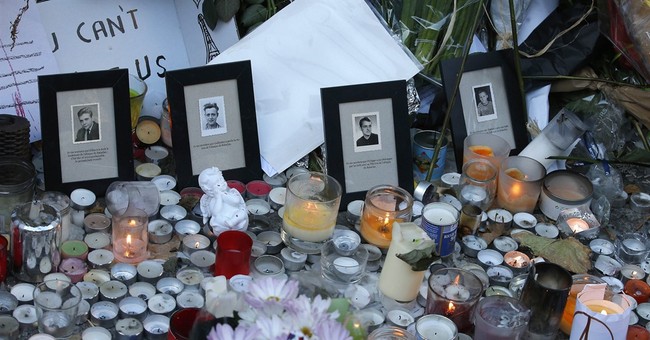 The left's reactions to the terror attack on Paris are in keeping with its tradition of getting almost everything wrong.

Take Bernie Sanders, for example. At the Democratic presidential debate, one day after the Paris attack, the democratic socialist candidate made this observation about al-Qaida:

"I would argue that the disastrous invasion of Iraq, something that I strongly opposed, has unraveled the region completely, and led to the rise of al-Qaida and to ISIS."

That a U.S. senator, let alone a man running for president of the United States, believes that the American invasion of Iraq led to the rise of al-Qaida should automatically disqualify him from serious consideration. It is a testimony to how many on the left twist reality to force-fit it into their ideology.

For the benefit of those too young to recall 9/11 -- and who probably haven't been told in school that Muslims in the name of Islam attacked America that day -- it was al-Qaida that attacked America. In other words, al-Qaida, founded in 1988, preceded the American invasion of Iraq by 15 years.

"This is an attack not just on Paris, not just on the people on France, but an attack on all humanity and the universal values we share."

At best, this is classic left-wing naivete; at worst, it is just nonsense produced by left-wing thinking.

The president offered another piece of left-wing foolishness:

"We're going to do whatever it takes to work with the French people and with nations around the world to bring these terrorists to justice."

This notion of "bringing terrorists to justice" is in keeping with the left-wing denial that we are in a war -- specifically a war on Islamist terror. In war you defeat -- which usually involves killing -- your enemy. You don't bring them to justice; you bring domestic criminals to justice. But for the left, all the world's Islamist terrorists are isolated criminals who by amazing coincidence happen to be Muslim.

And then there was New York Times columnist Frank Bruni.

In a column of breathtaking self-righteousness, Bruni wrote that he "felt sick" over the fact that people were saying anything about the Paris attack other than offering condolences to the French people.

"Can't we wait until we've resolved the body count?" he asked.

One of the allegedly egregious examples he cited was that of former New York Times correspondent Judith Miller, who tweeted:

"Now maybe the whining adolescents at our universities can concentrate on something other than their need for 'safe' spaces..."

Her tweet was in fact entirely apt. She asked that the spoiled immature brats who complain about not having "safe spaces" in their universities, understand what real evil is and come to appreciate how incredibly lucky and safe they are.

But to Bruni, this was just an example of how "anything and everything becomes prompt for a plaint, a rant, a riff."

On Jan. 8, 2011, in Tucson, Arizona, Jared Loughner murdered six people and gravely wounded Congresswoman Gabrielle Giffords. That very day, based on nothing, Bruni's New York Times colleague Paul Krugman wrote that the murders were a result of hate-filled rhetoric that saturates conservative and Republican life.

Did Bruni feel sick? He should have. Not only did Krugman not focus on the pain of the congresswoman and the murdered, but he lied about Republican rhetoric influencing the murderer.

British photographer Roger Hicks, author of 30 books on photography and a biography of the Dalai Lama, commenting in The New York Times on Bruni's column, wrote:

"What struck me was the hypocrisy of President Hollande who, if I heard correctly, described the attack as a 'declaration of war on the French state,' which has been waging war against Islamic State for months..."

Get it? Hollande is a hypocrite for describing the attacks as a declaration of war on France, since France had already been warring on Islamic State.

And then there was the Iranian-American professor and best-selling author, Reza Aslan, on CNN:

"Islam doesn't promote violence or peace. Islam is just a religion and like every religion in the world, it depends on what you bring to it. If you're a violent person, your Islam, your Judaism, your Christianity, your Hinduism is gonna be violent."

Another profundity from the left. There is no difference between Islam and any other religion today in terms of producing violence. It's just that murderers are more attracted to Islam than to any other religion.

Finally, let's not forget what is perhaps the most important of the left's responses to Islamist terror: bringing millions of Muslims from the Middle East and North Africa into Western countries. Thanks to Angela Merkel of Germany, Europe will be welcoming nearly a million, and thanks to Barack Obama and John Kerry, America is bringing 10,000 Syrian refugees into America next year. Regarding which Hillary Clinton said in her debate the day after the Paris atrocities:

And U.S. Secretary of State John Kerry said that America will accept 85,000 refugees next year, most of whom will be Syrians.

Just another week in the life of the left. It is doing nonviolently and internally what Islamist terror is seeking to do externally and violently -- dismantle Western civilization.