The Pope and the Hammer and Sickle 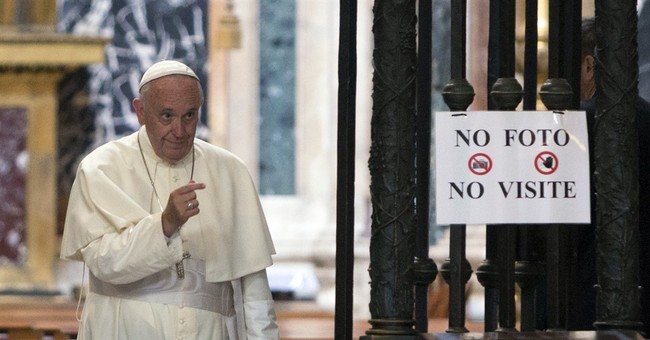 Last week the Marxist quasi-dictator of Bolivia, Evo Morales, presented Pope Francis with a gift: a carved wooden hammer and sickle cross on which the figure of Christ is crucified.

The Vatican announced that the pope had not been informed in advance about the gift. And some commentators said photos of the pope and Morales show that the pope was actually offended. That was a false -- probably wishful -- interpretation. The pope himself later announced that he was keeping the hammer and sickle crucifix and taking it home, saying, "I understand this work. For me it wasn't an offense."

And as reported by The Guardian, "Vatican spokesman Federico Lombardi said he personally wasn't offended by Morales' gift."

The pope's acceptance of Morales' gift -- along with his attacks on capitalism during his Latin American tour -- further confirms one of the most troubling moral developments of our time: The Roman Catholic Church is currently led by a man whose social, political and economic views have been shaped by Leftism more than by any other religious or moral system.

It also reconfirms what is probably the single most important development one needs to understand in order to make sense of the contemporary world: The most dynamic religion of the past hundred years has been Leftism -- not Christianity or Islam or any other traditional religion. Indeed, regarding traditional religions, Leftism has influenced them -- particularly Christianity and Judaism -- far more than they have influenced the Left. Mainstream Protestant Christianity, much of Catholicism (especially in Latin America, where Pope Francis lived his whole life before becoming pope), and most of non-Orthodox Judaism have become essentially liberal/Left movements with religious (and in the case of Judaism, ethnic) identities.

To make things worse, Francis received this gift from a man (Morales) wearing a picture of Che Guevara on his jacket. Is that, too, not worthy of condemnation by the Vatican? Guevara devoted his life to undermining human liberty and to killing innocents in the name of Communism.

What if, in a visit to an American museum, American artist Andres Serrano had presented Francis with a gift -- his work of art "Piss Christ" -- that features a crucifix in a jar of Serrano's urine?

Would the pope have accepted it? Would he have brought it home?

There could not have been a gift that more accurately represents this pope's value system than Christ crucified on a hammer and sickle. First, in a literal sense, that is exactly what Communists have done wherever they have assumed power: crucified Christ by working to violently to destroy Christianity and murder Christians. Second, in a figurative sense, the gift represents the melange of Christianity and Marxism, precisely what much of the church, again especially in Latin America, and especially this pope stand for.

My heart breaks for the millions of Catholics who feel that their beloved church is being led over a moral and religious cliff by a Leftist pope and innumerable other Leftists among cardinals, bishops and parish priests.

Though I am not a Catholic, my heart breaks, too. The only institutions that can resist the left-wing takeover of contemporary life are religious ones. When they fail, upon which institutions can we depend?

Tragically, we cannot turn to the contemporary Catholic Church. When the pope keeps a hammer and sickle crucifix; when the pope declares free market capitalism, the one economic system that has lifted masses of people out of poverty, to be largely evil ("the dung of the devil"); when Cuba's Cardinal Jaime Ortega declares that there are no political prisoners in Cuba; and when the pope issues an encyclical on global warming while the oldest Christian communities in the world are exterminated, it is clear that while one can still turn to individual Catholic priests and lay leaders for moral guidance, one cannot turn to the Catholic Church and its pope for moral guidance. On the contrary. One must fight back.

Dennis Prager's latest book, "The Ten Commandments: Still the Best Moral Code," was just published by Regnery. He is a nationally syndicated radio show host and creator of PragerUniversity.com.