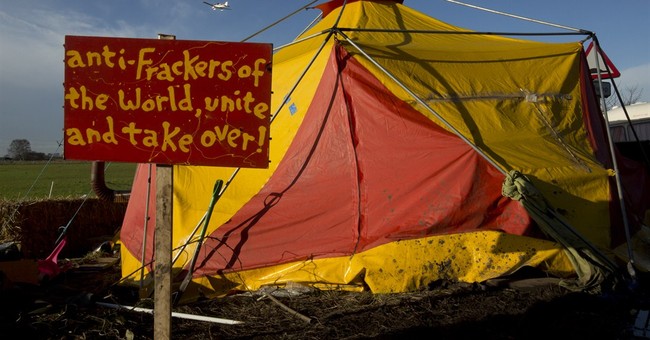 As I have often noted, the most dynamic and influential religion of the past hundred years has not been Christianity, let alone Judaism, the two religions that created the Western world. Nor has it been Islam. It has been Leftism.

Leftism has influenced the literary, academic, media, and, therefore, the political elite far more than any other religion. It has taken over Western schools from elementary through graduate.

For most of that time, various incarnations of Marxism have been the dominant expressions -- and motivators -- of Leftism: specifically, income redistribution, material equality and socialism. They are still powerful aspects of the left, but with the downfall of most communist regimes, other left-wing expressions have generated even more passion: first feminism and then environmentalism.

Nothing comes close to environmentalism in generating left-wing enthusiasm. It is the religion of our time. For the left, the earth has supplanted patriotism. This was largely inevitable in Europe, given its contempt for nationalism since the end of World War I and even more so since World War II. But it is now true for the elites (almost all of whose members are on the left) in America as well.

This was most graphically displayed by the infamous Time magazine cover of April 21, 2008 that altered the most iconic photograph in American history -- Joe Rosenthal's picture of the marines planting the flag on Iwo Jima. Instead of the American flag, the Time cover depicted the marines planting a tree. The caption on the cover read: "How to Win the War on Global Warming." In other words, just as German and Japanese fascism was the enemy in World War II, global warming is the enemy today. And instead of allegiance to the nation's flag, now our allegiance must be to nature.

This is the antithesis of the Judeo-Christian view of the world that has dominated Western civilization for all of the West's history. The Judeo-Christian worldview is that man is at the center of the universe; nature was therefore created for man. Nature has no intrinsic worth other than man's appreciation and (moral) use of it.

Worship of nature was the pagan worldview, a worship that the Hebrew Bible was meant to destroy. The messages of the Creation story in Genesis were that:

1) God created nature. God is not in nature, and nature is not God. Nature is nothing more than His handiwork. Therefore it is He, not nature, that is to be worshipped. The pagan world held nature in esteem; its gods were gods of nature (not above nature).

2) Nature cannot be worshipped because nature is amoral, whereas God is moral.

3) All of creation had one purpose: the final creation, the human being.

With the demise of the biblical religions that have provided the American people with their core values since their country's inception, we are reverting to the pagan worldview. Trees and animals are venerated, while man is simply one more animal in the ecosystem -- and largely a hindrance, not an asset.

On February 20, a pit bull attacked a 4-year-old boy, Kevin Vicente, leaving the boy with a broken eye socket and a broken jaw. Kevin will have to undergo months, perhaps years, of additional reconstructive surgeries. A Facebook page was set up to raise funds. But it wasn't set up for Kevin. It was set up for the dog. The "Save Mickey" page garnered over 70,000 "likes," and raised more than enough money to provide legal help to prevent the dog from being euthanized. There were even candlelight vigils and a YouTube video plea for the dog.

The non-profit legal group defending Mickey is the Lexus Project. According to CBS News, "the same group fought earlier this year for the life of a dog that fatally mauled a toddler in Nevada."

This is the trend. Nature over man.

This is why environmentalists oppose the Keystone pipeline. Nature over man. The pipeline will provide work for thousands of people and it will enable Canada and the United States to increasingly break away from dependence on other countries for their energy needs. But to the true believers who make up much of the environmentalist movement, none of that matters. Just as they didn't care about the millions of Africans who died of malaria as a result of those environmentalists' efforts to ban DDT.

One of the fathers of the green movement is James Lovelock, the scientist who originated the Gaia hypothesis of the earth as a single living organism. This past Sunday, the British newspaper, the Guardian, reported that, "Talking about the environmental movement, Lovelock says: 'It's become a religion, and religions don't worry too much about facts.'"

He also told the interviewer "that he had been too certain about the rate of global warming in his past book ... that fracking and nuclear power should power the UK, not renewable sources such as wind farms."

As G.K. Chesterton prophesied over a hundred years ago: "When people stop believing in God, they don't believe in nothing -- they believe in anything."

Now it's the environment.