Dennis Avery
|
Posted: Apr 04, 2017 10:39 AM
Share   Tweet
The opinions expressed by columnists are their own and do not necessarily represent the views of Townhall.com. 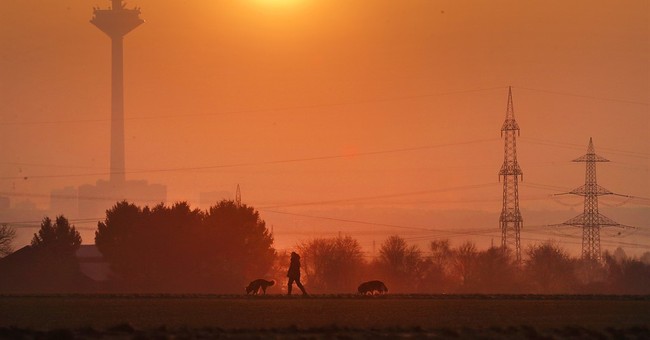 CERN’s CLOUD experiment findings are now being used to model predictions for the next 100 years—and the model shows a solar sunspot minimum will soon lower earth’s temperatures by half a degree C. The long cold minimum is expected to hit about 2040, and such minimums have historically lasted about 60 years. Equally important, the solar minimum will come on the heels of the current 20-year “hiatus” in earth’s warming, which has defied the climate modelers.

Together, the two events could mean no trend increase in earth’s thermometer readings from 1998 until after 2100! That’s a century of non-warming, and neither occurrence is connected to CO2 changes. This finding demotes CO2 to a supporting role, contributing no more than one degree C warming for a redoubling of atmospheric CO2.

The new modeling was done by four European institutes, all previously strong supporters of the CO2/greenhouse-gas theory: The Physical Meteorological Observatory Davos (PMOD), the Swiss Federal Institute of Aquatic Science and Technology (EAWAG), ETH Zurich and the University of Bern.

The new solar quantification is vital to help us understand climate change factors. Evidence of the sun’s pivotal role in climate change is growing, but still incomplete. For example, neither the sun’s magnetic activity nor its important ultraviolet emissions are presently measurable.

CERN confirmed that the Little Ice Age was cloudier than thought. Moreover, they found modern pollution from burning fossil was less important than the computer models guessed. That means the Little Ice Age morphed naturally into a Modern Warming after 1850. The centuries-long warmings and coolings of the natural Dansgaard-Oeschger climate cycle, previously gave earth the Medieval Warming (950–1300 AD), the cold Dark Ages, (60–-950 AD) the long Roman Warming (200 BC– 600 AD) as well as hundreds of earlier abrupt climate shifts.

CERN’s lead author, Ken Carslaw of Leeds University, wrote in the CERN Courier for December, 2016, that all the climate models cited by the Intergovernmental Panel on Climate Change need to be redone—and revised downward.

Warnings that CO2 was not the controlling climate change factor have been presented for years—and ignored by climate modelers, the media, and the public.

2) The temperature record since 1850 shows three strong upward surges that each lasted decades: 1860–1880, 1915–1940 and 1998–2000. Phil Jones, Director of Research for the UK’s University of East Anglia, conceded on BBC radio in 2010 that the three warmings were statistically identical, but his university called only the 1976-98 warming “unprecedented” and “man-made.”  It is now clear that all three temperature surges were caused by the 60-year Pacific Decadal Oscillation, recognized by fisheries experts only in 1996.

3) In 2001, NASA and MIT collaborated on a major study of the sky over the Pacific Warm Pool. They found that when the warm pool reached 30 degrees C, an “iris” opened in the sky overhead. The high, heat-sealing cirrus clouds dissipated, and huge amounts of heat escaped to space through the opening. Enough heat escaped, the researchers said, to have dealt with an instantaneous doubling of CO2 in the atmosphere. The earth was defending its own climate stability.

The NASA/MIT study involved top government and university scholars, geostationary satellites for cloud measurement, and the best aerial sea-surface data that could be gathered. The results were published in Science, and the American Meteorological Organization issued a press release. Again, the climate modelers, the media and the public ignored it.

The media ignored all of this evidence and the general public had no way to know. That is why the CERN study and the new follow-up by European modelers are so important. The Obama White House pushed the United States into a Paris Agreement that statistician Bjorn Lomborg says could cost $100 trillion by 2100. Worse, it would reduce earth’s temperatures by only 0.003 degrees C—even if CO2 was the Earth’s thermostat.

The Democrats rail against any effort to reduce our commitment to cutting CO2 emissions. They even set a requirement for U.S. autos to average an impossible 54.5 miles per gallon by 2025! They also launched a “war on coal,” severely disadvantaging heartland states that rely heavily on coal-fired power plants. If allowed to continue, the war on coal’s job losses will extend far beyond the coal miners in West Virginia.

To Save The Country, Destroy The Public Education System
Townhall
Olympia, WA issues permits for free RV parking on public streets
Twitchy
WATCH: Woman Being Assaulted Pleads for Help While NY Subway Riders Do Nothing
Redstate
Why the Heck Did Amber Heard's Legal Team Call Her Back to the Stand?
PJ Media