Spooking the Next Top Spook

Debra J. Saunders
|
Posted: May 07, 2018 12:01 AM
Share   Tweet
The opinions expressed by columnists are their own and do not necessarily represent the views of Townhall.com. 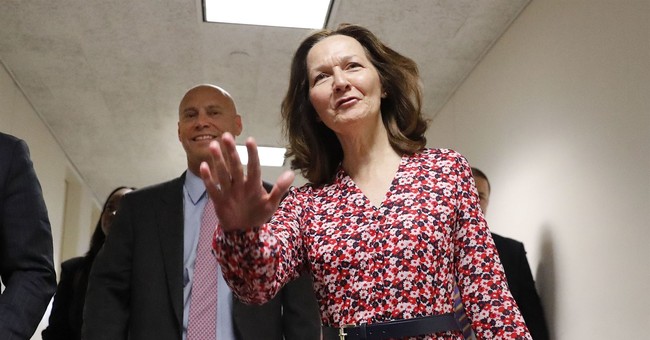 WASHINGTON -- The U.S. Senate faces a clear choice as it prepares to confirm -- or reject -- acting CIA Director Gina Haspel as the permanent head spook.

Confirm Haspel and get a chief who will encourage staff to do their utmost to uncover what they need to know to protect this country. Or, reject her and prepare to settle for a cover-your-behind and keep-your-head-down bureaucrat whose chief selling point is not sticking out.

Of course, Haspel -- President Donald Trump's pick to replace former director and current Secretary of State Mike Pompeo -- is in for a lonely slog in her bid to become the rare career CIA officer to take the helm and the first female CIA chief. Trump critics smell blood.

The left has begun to organize an opposition campaign likely to keep Democratic senators from supporting Haspel. Meanwhile, Kentucky Sen. Rand Paul, one of 51 GOP senators, has said he opposes Haspel, and other GOP senators are on the fence.

And it's because Haspel put national security first.

Under President George W. Bush, Haspel authorized the use of enhanced interrogation techniques, including waterboarding, which was used on three al-Qaida detainees. She was acting in accordance with Department of Justice memos that found harsh interrogation methods to be legal.

In 2018, the memos are a distant memory and critics breezily can dismiss CIA staffers who were desperate to prevent another 9/11 as torturers.

Did the same human rights activists who found the harsh methods inhumane protest when President Barack Obama, one of their own, stepped up the use of drones? Some did. Others remained more indignant about methods authorized under a Republican president that were painful for detainees than methods authorized by his Democratic successor that outright killed terror suspects.

Haspel's other big sin is her role in the destruction of videotapes that showed the waterboarding of two detainees. In 2005, she drafted a memo that advocated destroying the tapes. Her boss, then director of clandestine services, Jose Rodriguez, issued the memo and the tapes were destroyed. Investigators under Bush and Obama found no laws had been broken.

Former CIA Deputy Director Mike Morell cleared Haspel, noting that it was not her decision to destroy the tapes, but that of Rodriguez, whom Morell reprimanded.

To the American Civil Liberties Union, this destruction of tapes that likely would have become a handy propaganda tool for al-Qaida is a bad thing, a denial of "transparency on torture."

On an ACLU conference call Wednesday, national political director Faiz Shakir told reporters, "This is an opportunity to demonstrate what the resistance looks like." The resistance is the term Democrats use for obstructing Trump's agenda.

The Haspel resistance is all about scoring points -- and it ignores the input of a long list of national-security luminaries from both parties who urged the Senate to confirm Haspel. The list includes former Sen. Bob Kerrey, D-Neb., and Obama CIA Director Leon Panetta.

Jeremy Bash, who was CIA chief of staff under Obama, wrote on NBC's website: "Democratic and Republican senators should welcome Haspel's clear-eyed approach to Russia, her expertise in counter-terrorism, her record of nonpolitical service and the fact that she is no crony of the president or anyone at the White House."

To be sure, there are senators who object to the use of waterboarding and drones and whose first impulse will be to reject Haspel for those reasons. But it is the fence sitters who will decide, and not necessarily out of conscience.

Former CIA spokesman Bill Harlow warned that if Haspel "goes down, Lord knows who else they would nominate for the job. It won't be someone as qualified."

As for the self-styled transparency coalition, it is amazing how the quest for sharing information evaporates when that mirror is turned on it.

The ACLU media advisory notice for Wednesday's conference call included this note: "Only on-topic questions will be addressed in the media call." Why refuse to answer off-topic questions?

During the call, a reporter had an unauthorized question for speaker Daniel Jones, billed as the "former chief investigator and lead author of the torture report" released by the Senate Intelligence Committee in 2014.

Recently Jones' name has been linked to Fusion GPS, the opposition research firm that commissioned the so-called "dossier" on Trump's alleged ties with Russia. On Tuesday, former Trump aide Michael Caputo accused Jones of hiring Fusion GPS to continue its opposition research against Trump after the election.