How Serious Is the Libertarian Ticket?

Debra J. Saunders
|
Posted: Aug 02, 2016 12:01 AM
Share   Tweet
The opinions expressed by columnists are their own and do not necessarily represent the views of Townhall.com. 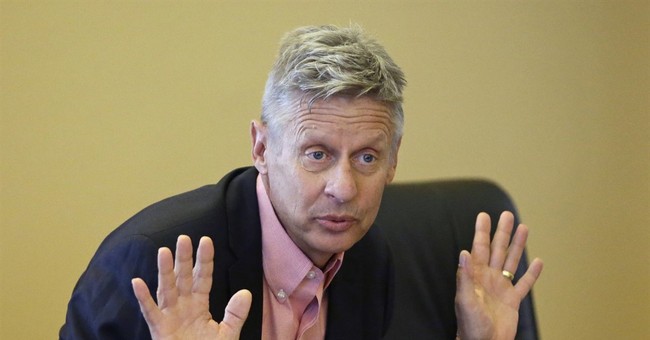 Trending
Libertarian presidential nominee Gary Johnson, the former New Mexico governor, and his running mate, Bill Weld, a former Massachusetts governor, bill themselves as the "credible alternative to ClinTrump." The two former GOP governors, who won re-election in bluish states, have a bounce in their step on the campaign trail. "Give us one term, America, and if after four years you decide you don't like peace, prosperity and freedom, you can always vote a Trump or a Hillary back into office again," Johnson mugs in a campaign video.

There's trouble in paradise, alas. Many Libertarian-leaning conservatives disillusioned with Donald Trump -- I am one -- are looking at the Johnson-Weld ticket and wondering, as Cato Institute Senior Fellow Ilya Shapiro blogged Saturday, "Is Johnson-Weld a Libertarian ticket?"

Shapiro was particularly troubled on two fronts -- the courts and religious freedom. Reason.TV host Nick Gillespie recently asked Johnson and Weld whom they'd nominate for the U.S. Supreme Court. Johnson answered that he would look for good people who focus on the "original intent" of the Constitution -- a good, old-school Libertarian answer. Then Weld threw out two names -- Justice Stephen Breyer, a Bill Clinton nominee who believes the Second Amendment does not protect the right to self-defense, and Judge Merrick Garland, whom President Obama nominated to fill the Antonin Scalia vacancy. Shapiro told me Garland "defers to the government more than anyone I've studied in depth." It especially troubles Shapiro that "Johnson didn't correct" Weld.

Campaign spokesman Joe Hunter told me that if the ticket should win, top-guy Johnson -- not Weld -- would pick justices. Weld, I should note, is no natural Libertarian. He endorsed Barack Obama in 2008.

Shapiro also is concerned that Johnson supports government actions that infringe on religious liberty: Johnson is "OK with fining a wedding photographer for not working a gay wedding -- a case from New Mexico where Cato and every libertarian I know supported the photographer -- and forcing the Little Sisters of the Poor to pay for contraceptives (where again Cato and libertarians supported religious liberty)." Johnson told the Washington Examiner that he doesn't believe social conservatives should be able to force their views on others. So he supports laws that force contrary views on social conservatives. To savvy Libertarians, that's an overuse of government power.

At times, it feels as if Johnson gets distracted by shiny ideas. During an interview, Johnson was checking all the right boxes until he told me he thought a city might prevent overdose deaths by opening "a satellite office that you could come in and test your heroin before you took it." You mean private companies could do the testing? I interjected. Yes, he answered. Too bad we didn't get into the dubious advisability -- as in: utter insanity -- of clinics telling junkies they can use a certain batch of heroin.

Shapiro is not out to enforce Libertarian purity. I think he'd like to see what I want to see -- a smart focus on more freedom and less government. That means Weld moving closer to Johnson, not vice versa. That means more talk from both men about cutting government spending by 10 to 20 percent and more of Johnson urging Bernie Sanders' supporters to focus on "opportunity equality" in lieu of "income inequality," and more shout-outs for the sharing economy.

When I asked Johnson to name three regulations he would eliminate if elected, he had no short list. The campaign needs an issues audit, pronto. Hunter reminded me that as governors, both Republicans reflected libertarian values. True, but it's been more than a decade since Johnson was a governor, and almost two decades for Weld. The trenches have moved since 2003. This is the year of political disruption. It's great Johnson and Weld are buddies, but how sharp are their knives?