Debra J. Saunders
|
Posted: Mar 27, 2016 12:01 AM
Share   Tweet
The opinions expressed by columnists are their own and do not necessarily represent the views of Townhall.com. 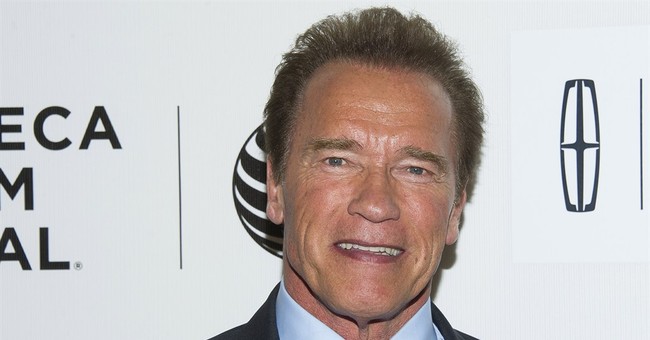 They're both iconic figures in American culture who are known by their first names. California's former governor is Arnold. The GOP presidential front-runner is The Donald. We Californians who lived through Arnold's two terms in the governor's office have watched The Donald's presidential campaign unfold with a sense of deja vu.

Donald Trump starred in the TV show "Celebrity Apprentice." Arnold Schwarzenegger will replace him. Both men can boast supersize personalities and bulging bank accounts. Both bombasts ran for a top office with no political experience whatsoever -- which turned out to be a plus, as they tapped into a tidal wave of voter resentment. Both are more pragmatic than ideological.

Schwarzenegger's supporters thought he could not win a GOP primary -- and he didn't have to, because he ran and won in California's free-for-all recall election of 2003. Trump's front-runner status in the 2016 primary -- also the beneficiary of a crowded field -- likewise has confounded the professional political class.

Over the past week, I talked to four former Schwarzenegger aides (only two of whom would say anything on the record) about what Trump and Schwarzenegger have in common, how they are different and what Schwarzenegger's tenure might tell us about a Trump presidency should he win in November.

One former adviser, Adam Mendelsohn, who wanted nothing to do with a negative assessment of Schwarzenegger's time in office, told me he sees "absolutely no similarity between the two" men. All appreciated that the biggest difference is that Trump is running for president -- as a naturalized citizen, the Austrian Oak is not eligible to be president under the Constitution -- and there should be a higher bar for the man who wants to have his hand on the nuclear button.

Looking back, Schwarzenegger's first term was highly successful in many ways.

True to a campaign promise, Schwarzenegger renegotiated terms with major tribal casinos, which netted state coffers a $1 billion windfall. He also ushered much-needed workers' compensation reform through a reluctant Legislature by threatening to put a measure on the ballot if Sacramento did not pass a bill.

Later, the Governator overreached when he placed four different ballot measures before voters. When Californians rejected all four, Schwarzenegger's aura of invincibility crumbled.

Many had feared that if Schwarzenegger failed to live up to his promise, it would be because he needed to be liked. And that's exactly what happened. Schwarzenegger told voters he heard their message and promised to work with the Legislature. That signaled a lurch to the left. He won re-election. In term two, Schwarzenegger enacted a landmark law to curb greenhouse gases, a move very popular among Democrats. On the way out the door, Schwarzenegger issued a pardon that shaved nine years off a 16-year term for voluntary manslaughter, which benefited the former Assembly speaker's son.

Schwarzenegger entered politics with the sort of great American success story that only an immigrant can tell. He dreamed of becoming an American, and he did. He worked hard. His belief in the free market steered him to the GOP. He worshipped conservative economist Milton Friedman. He had tried to push through meaningful pension reform and pare back state spending. But saddled with a Legislature loaded with Democrats, even with his sharp political instincts, he did not succeed. When conservative political neophytes fail, their path to salvation is to list left. And there he stayed.

Trump has fewer conservative credentials. He supports the use of eminent domain to seize property for private development. He has lavished money on Democratic candidates. If he should win the White House and find himself flailing in the polls, then he would know where to go.

It is instructive to note that for all they have in common, Schwarzenegger chose to endorse not Trump but Ohio Gov. John Kasich. Schwarzenegger spokesman Daniel Ketchell told me it's because Kasich knows how to work in the center.

Former Schwarzenegger aide Sean Walsh, however, thinks Schwarzenegger chose Kasich over Trump precisely because Trump is too much like Schwarzenegger. Let me add another trait The Donald and Arnold share: They're both salesmen first. And salesmen usually aren't around when you need to fix the refrigerator.