Debra J. Saunders
|
Posted: Mar 03, 2016 12:01 AM
Share   Tweet
The opinions expressed by columnists are their own and do not necessarily represent the views of Townhall.com. 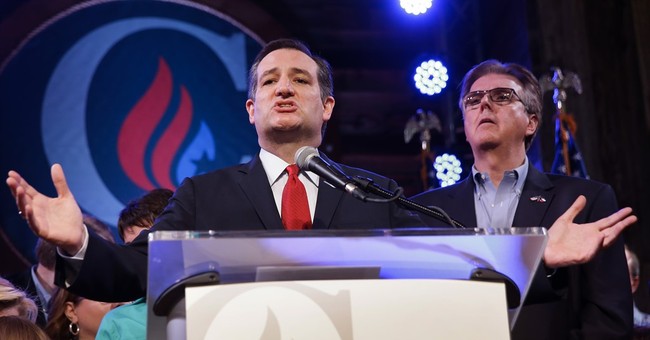 Trending
I could vote for Ted Cruz in the California primary, I realized as I learned the senator from Texas won not only his home state on Super Tuesday but also Oklahoma. Cruz also beat Donald Trump in the Iowa caucuses and claimed the top spot in the Alaska caucuses Tuesday.

OK, so maybe I've scolded Cruz for leading the GOP House into a box canyon in his doomed effort to defund Obamacare. And I may have called him a snake a time or two. There's something about the way he talks that gets on my nerves. I believe that Sen. Marco Rubio of Florida would have a much better chance of winning in November than Cruz. Likewise Ohio Gov. John Kasich. But the most important thing now is to deny Trump the nomination, and Cruz has won the second-most delegates so far.

The Washington Post's Dan Balz figures the GOP has two weeks to stop Trump. If he's right, then there may not be time to wait for Rubio or Kasich to catch fire. If all three R's stay in the race, the only other means to beat Trump would be to deny him the needed 1,237 delegates -- in which case Cleveland convention delegates would choose the nominee. (In 1976, Ronald Reagan supporters tried -- but failed -- to bump out front-runner Gerald Ford with a convention vote.) The surest way to dump Trump is with a rival who wins more delegates than The Donald.

Supporting Cruz won't be easy for many insiders. Not a single fellow GOP senator has endorsed Cruz. His kamikaze tactics have alienated many professional Repubs. Cruz himself has admitted he's not the candidate you'd choose to kick back with to share some brews. But he hasn't lumped undocumented Mexican immigrants into the "drug dealer, rapist" category as has Trump. He hasn't called for a ban on Muslims entering the United States a la Trump. His language isn't calibrated to insult women as is Trump's.

I don't think Trump's views are winning votes; it is that he started off as a celebrity. Being famous gave the reality TV star access to priceless free media airtime. He used it to make statements so outrageous that he dominated the following news cycle. Breathless TV pundits then marveled at Trump's genius for getting away with crude, childish remarks. Because (sarcasm alert) that's never happened before with a celebrity.

Trump also has won the most states and delegates thanks to a crowded field, which helped him despite polls showing that most Republican voters don't want Trump. Maybe Trump would win in November. Or maybe, as Cruz spokesman Ron Nehring wrote in an email, "Donald Trump as the nominee gives you President Hillary Clinton, a Democratic Senate, and a Supreme Court that's lost for a generation."

If I were voting March 15 and saw a path to Rubio's winning Florida, I'd vote for Marco. Outside that sliver of light, the smart Republican has to look at Cruz. As Sen. Lindsey Graham, R-S.C., told CBS News on Tuesday, "Ted Cruz is not my favorite by any means ... but we may be in a position where we have to rally around Ted Cruz as the only way to stop Donald Trump." A small number of Republicans have announced they would not vote for Trump in a Trump-Clinton contest. If Cruz were to win the GOP primary, they might not like voting for the senator, but who said you're supposed to like voting?