I Am Thankful for You, Valued Reader 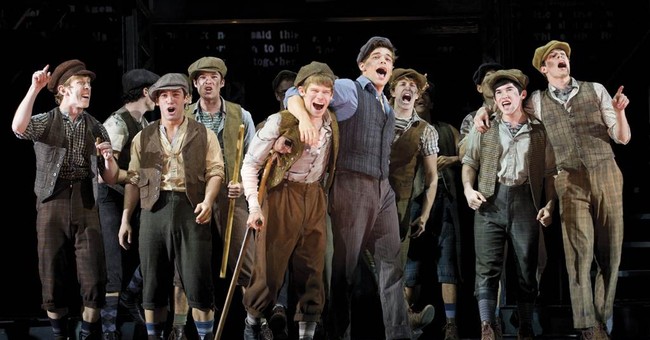 Earlier generations believe that male enlistment in the military had an equalizing effect; wars brought men from all classes together to fight for a common cause. Newspapers are the modern (much less dangerous) equivalent, in that they provide a common experience for people of all walks of life, as well as a common investment. My 98-year-old mother-in-law, who has a high-school education, reads the same paper that people with letters after their names read.

A couple of years ago, I saw "Newsies" on Broadway, a musical based on the 1899 New York newsboys' strike. It was odd to sit in a theater filled with young fans who were caught up in the plot about newspaper tycoon Joseph Pulitzer's underpaying and bullying his young hardscrabble newspaper hawkers. I presume many of them wouldn't dream of reading a newspaper, never mind paying for it. Many get their daily reports from news feeds and Facebook; their information is customized, sort of like a sandwich with the crusts cut off.

When you get your news from Facebook friends and like-minded websites, your politics remain in an echo chamber of stories that validate your worldview. When you open up a newspaper, you don't know what you are going to read. There will be problems that you probably didn't anticipate, as well as heroes in unlikely places. Newspapers, like life, are filled with stories that challenge how you think the world works. You consider yourself pro-law enforcement, for example, but then you discover outrageous abuses in the federal sentencing system that violate all sense of fairness.

Years ago, I began a tradition of using the holidays to rail against federal mandatory-minimum sentences, which in 1993 condemned Clarence Aaron, a young African-American from Alabama, to life without parole for a first-time nonviolent drug conviction. Every year, I asked the president to use his pardon power to commute Aaron's sentence. President George W. Bush asked his pardon attorney to reconsider Aaron's petition for clemency; the Justice Department official wrongly recommended against a commutation as he withheld crucial information on the case. In 2013, President Barack Obama acted. Now Aaron is a contributing member of society.

I learned about Aaron through a "Frontline" documentary on federal sentencing abuses, produced by Ofra Bikel. ProPublica's Dafna Linzer, now with MSNBC, later reported on the former pardon attorney's bad-faith move. Engaged readers wrote to the White House to ask for justice. Journalism works best as a group activity.

As I write this, Washington Post reporter and Bay Area native Jason Rezaian is in an Iranian prison after he was convicted for undisclosed crimes and sentenced to a prison term of unknown length. Because I don't work in Tehran, I go to work every day knowing that the worst thing critics can do is call me names.

People ask me how a conservative can survive working for the liberal San Francisco Chronicle. There's one core belief I share with my esteemed colleagues -- committing journalism. We couldn't do it, valued reader, without people like you, who care.