Paris a 'Sickening Setback' for Obama 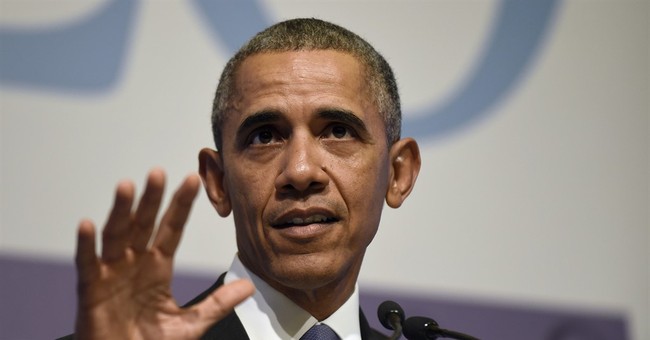 "Why can't we take out these bastards?" CNN's Jim Acosta bluntly asked President Obama at a Monday press conference at the Group of 20 summit in Turkey. "These bastards," of course, are the Islamic State -- at least for Acosta. As Obama called Friday's attacks in Paris that left at least 129 dead a "sickening setback," he saw no need to reset his Syrian policy.

Obama has been in a state of denial about the Islamic State. In 2014, the president famously told The New Yorker that the Islamic State, also known as ISIS and in Arabic, Daesh, was a "JV team" that might dress like the Lakers but would never match Kobe Bryant. The day before the Paris attacks, Obama told ABC the Islamic State was "contained" in Iraq and Syria.

His cardinal sin, however, is not a poor choice of words, but his failure to cut a deal with Iraq to leave U.S. troops behind after 2011. By not leaving behind a force that could douse hot spots as needed, the administration created a safe zone for al-Qaida and its offshoots. That void enabled the Islamic State to seize Iraqi cities.

It's no wonder Obama wants the United States to take in some Syrian refugees -- he helped create them.

At Saturday night's CBS Democratic debate, moderator John Dickerson asked Hillary Rodham Clinton if as secretary of state, she shared Obama's legacy of underestimating ISIS. Clinton deftly tossed the blame for the decision to withdraw all U.S. troops from Iraq onto President George W. Bush. "We abided by the agreement" Bush signed with Iraq in 2008, she said, to withdraw all U.S. troops by Dec. 31, 2011. As the Washington Post Fact Checker noted, there was some expectation, however, that Baghdad ultimately would agree to terms that would have allowed some U.S. troops to stay -- but the Obama administration did not offer terms conducive to a deal.

Obama told reporters that it is easy for GOP presidential candidates to use "bellicose" language -- they don't have to go to Walter Reed Army hospital, as he has done, and look in the eye U.S. troops severely wounded in battles he ordered. Therefore, Obama concluded, "I can't afford to play some of the political games that others make."

I respect that sentiment. I also understand that whatever course a president takes, there will be victims who have to pay the price. There is no risk-free path.

The problem with Obama is that he will send troops into harm's way -- just enough troops to quiet his critics, but not necessarily enough make sure their sacrifices pay off. He ordered a surge of troops in Afghanistan, which was needed, but undercut their ability to prevail and emboldened the enemy when he simultaneously announced he would begin to withdraw them in 2011.