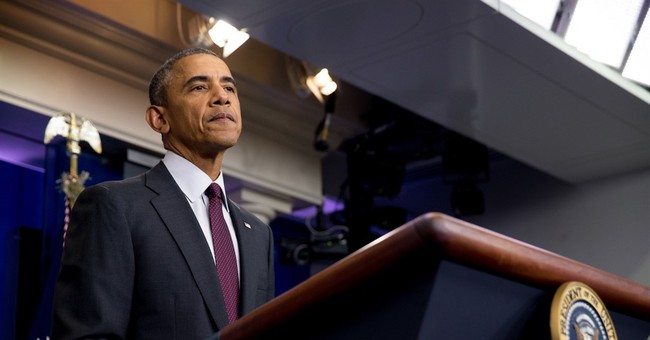 After America learned of the latest mass shooting at an Oregon community college, President Barack Obama delivered remarks in which he lamented the loss of good, innocent people and then added: "Somehow this has become routine. ... We've become numb to this." By the next day, Obama had a remedy: "Be a single-issue voter."

Nine adults who should be alive today are not, while the 26-year-old shooter got what he wanted -- to leave this earth in what he perceived as a blaze of glory. It is revolting to think how easy it is for some unhappy loser to leave a swath of destruction because he cannot make a life for himself in this world. The problem with guns is simple: Any idiot can kill others with them.

Obama and other Democrats such as Sen. Dianne Feinstein would have you believe that they have an easy answer to this problem. Obama talked up proposed background checks as a remedy when he should have known the checks would have made no difference; the Oregon shooter had no criminal record, no restraining order against him, no involuntary commitment to a mental institution. The New York Times reported that the shooter brought five handguns and a rifle with him to Umpqua Community College -- but left seven firearms at home. A Bureau of Alcohol, Tobacco, Firearms and Explosives spokeswoman said the shooter and his family had 14 firearms in total -- all purchased legally from a federally licensed firearms dealer.

Feinstein sent out a statement: "After each shooting, I've been hopeful that Congress would act to close the gun show loophole, mandate universal background checks and remove high-capacity magazines and military-style assault weapons from our streets."

Last week, National Review's Charles C.W. Cooke asked the hosts and other guests on MSNBC's "Morning Joe" which specific proposals they believe could prevent another Roseburg. "This is not a competition to see who is the most vexed," Cooke maintained, adding it is -- or at least it is supposed to be -- a public policy debate. Cooke was wrong; it is a contest about which side looks angrier.

Co-host Mika Brzezinski jumped all over Cooke for not wanting to do more. Mark Halperin, co-managing editor of Bloomberg Politics, said, "We need passion to solve this, not talk about complexity and talk about how the other side's ideas aren't any good." They offered no concrete ideas.

In the gun debate, you often see people who would never buy a gun saying they support reasonable rules such as background checks, when what they really want to do is stop others from owning guns. The shooter's father on CNN said he wants Congress to pass "gun control" laws. He also said, "I'm a great believer: You don't buy guns. Don't buy guns." That's the sort of talk that prompts gun enthusiasts to buy more guns before Washington bans them. Ditto the Feinstein statement.

So the question I would ask is: Is the idea to pass a law that makes supporters feel good, or is it to prevent violence against innocents? Or is it about turning people into single-issue voters?