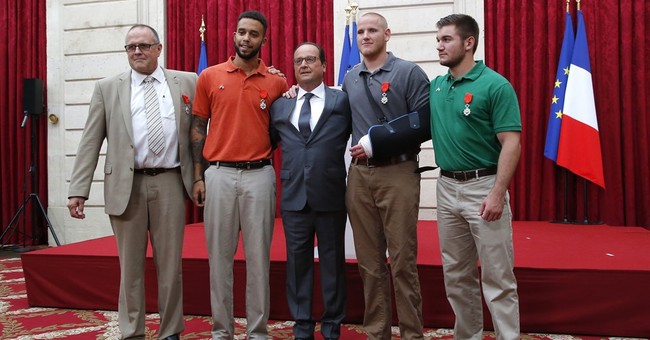 Editor's Note: The following column is by Froma Harrop.

Every country has its heroes, but something in America's cultural sauce makes for a unique and unusually effective variety. The ingredient would be improvisation -- the ability to perform without preparation, using whatever is at hand to complete the task.

As most of the world knows, Spencer Stone, Alek Skarlatos and Anthony Sadler -- three pals on a European jaunt -- were on a fancy train hurtling toward Paris, when a terrorist bristling with weaponry started attacking passengers.

The Americans were unarmed, but when Skarlatos said "Let's go" to Stone, the off-duty U.S. airman ran down the aisle, grabbed the man by the neck and wouldn't let go, even as the attacker slashed him. Skarlatos grabbed his gun. Sadler and a British passenger, Chris Norman, held down various limbs.

Improvisation requires letting gut instinct take the wheel from overthinking. As Skarlatos, a National Guardsman who spent time in Afghanistan, later told the media, his actions on the train weren't "a conscious decision."

Jazz, a truly American musical form, is all about improvisation, making it up as you go. "Do not fear mistakes," Miles Davis said. "There are none."

"Let's go" reminded many of "Let's roll," Todd Beamer's famous words on a doomed airliner hijacked on Sept. 11, 2001. Beamer and other passengers were trying to neutralize the terrorists and regain control of the airliner.

Before the Normandy D-Day invasion, Gen. Dwight Eisenhower instructed his field commanders to make quick decisions on their own rather than wait for instructions from above. They did, and their improvisation saved many American lives on the battlefield.

In 2009, pilot Chesley Sullenberger landed his disabled airliner on the Hudson River without a single loss of life in a classic example of on-the-spot improvising. Air controllers had suggested one of two nearby airports for an emergency landing, but instinct sharpened by experience told Sullenberger to take that unconventional -- and successful -- option.

Perhaps because Stone, Skarlatos and Sadler acted so simply, they did not fully comprehend the complex aftermath of what they had done -- including the depth of their heroism.

Exercising calm control, they beat the terrorist unconscious but not to death. Stone attended to another wounded passenger in the car, though he himself was seriously hurt. He is a trained medic. That's what medics do.

Once the assailant was out cold, the Americans, with some help, tied him up like a package and handed him over to the French authorities. In their way of thinking, the drama was over.

"I thought they were going to let us go after questioning," Sadler later told assembled media.

Did they imagine that after saving a trainload of passengers, they'd just move on to their next European adventure, say, waiting in line to see the Le Corbusier exhibit at the Pompidou Center?

There was nothing false about these Americans' modesty. They seemed surprised to find themselves in the ornate Elysees Palace, being handed the Legion of Honor, France's highest award, along with Norman.

But there was French President Francois Hollande, tailored to the millimeter, handing medals to the three Americans, who, though clean and pressed, were suitless and tieless. (At least their shirts had collars.) Norman had packed a suit and tie.

Americans obviously don't have a monopoly on quick and courageous action. Do remember Jasper Schuringa, the Dutch national who may have saved Northwest Flight 253 in 2009. Upon seeing a terrorist trying to set off bombs sewn in his underwear, Schuringa jumped over seats to tackle him and started putting out the fire with his hands.

For the three Americans on the train, improvising saved the day, but because it came so naturally, they didn't see the big deal in it. By now, one hopes, they know otherwise.

Follow Froma Harrop on Twitter @FromaHarrop. She can be reached at fharrop@gmail.com. To find out more about Froma Harrop and read features by other Creators writers and cartoonists, visit the Creators Web page at www.creators.com.