All the World's a Stage -- Even San Quentin 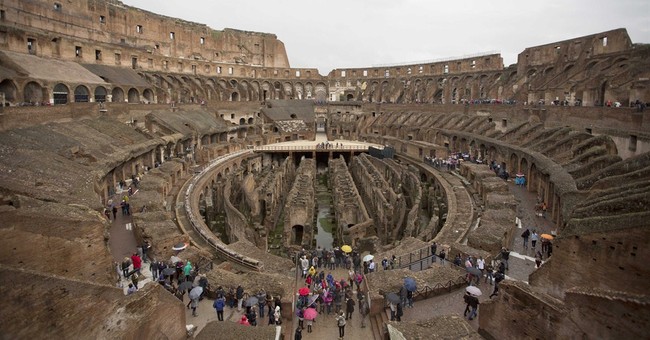 Julius Caesar lay dead. The senators who took his life stood dumbstruck, faced with the foul deed they had done, and then fled in a panic. Mark Antony stared at the corpse in horror and then raged, "Cry 'Havoc!' and let slip the dogs of war." He picked up Caesar's heavily tattooed lifeless body and exited the stage. The audience gasped.

It wasn't just the fine performance of LeMar Harrison, aka Maverick, who played Antony, that moved the crowd. It was the heft of Azraal Ford, the larger-than-life actor who played Caesar. Big Az is a towering, well-built man. Maverick is buff but shorter, yet he somehow managed to carry Big Az with seeming ease down the aisle of the 300-seat chapel that served as San Quentin's stage.

An English major at one of America's most prestigious universities can skip Shakespeare, but the Bard still commands respect in select California prisons. The Marin Shakespeare Company has sponsored Shakespeare productions at San Quentin State Prison since 2003. The program is funded by grants and donations. This May, San Quentin and Solano state prisons put on two plays, "Julius Caesar" and "Macbeth." Lesley Currier of the company told me that many inmates enter the program "shut down emotionally." Practicing the dramatic arts teaches empathy, as actors have to put themselves in another's skin. "Theater breaks down social barriers, creates friendships, reduces stress and builds bridges between people who might not otherwise have had reasons to interact and learn about each other," a teachers manual explains.

The rigid ethnic divide you read about in prisons has no place on this stage. Big Az is white. Maverick is black. Carlos Flores played Brutus and Upu Ama a fellow conspirator. Members of the mostly inmate cast -- two civilian women played Calpurnia and Portia -- said the experience helped them grow. During a question-and-answer session after the play, one inmate said the production helped the cast develop "as new characters." He continued, "We're not the same men that came in 25 years ago."

And quite a cast it is. The penitentiary players represent the cream of California's serious-offender crop. They entered the correctional system with high-risk classifications because they committed serious crimes. As time passed, they learned discipline. They resisted temptation. They tried to better themselves by participating in prison programs. With clean records, they were able to matriculate from Pelican Bay, Folsom or other maximum-security housing for Level IV offenders to San Quentin's medium-security dorm. San Quentin has become the destination prison for Level II offenders.

Before the play began, a 28-year-old inmate seated nearby told me about himself. Among the wizened felons who fill the state's correctional institutions, he's a baby. "Twenty-eight?" I think to myself. "He was a kid when he entered the system. He must have done something very ugly." Now he's trying to complete his GED to prepare for his first parole board hearing. It's in nine years.

Sitting next to me in the audience of inmates and civilians was Lady Jae, a black transgender inmate who entered the corrections system as Jarvis Clark. She plays Lady Macbeth in the company's production of "Macbeth." She pointed out a white inmate who at one time would not have anything to do with African-Americans. Now he is a member of a theatrical troupe with black actors. As a transgender inmate, she has experienced hostility from other inmates, especially when she served time in tougher prisons. San Quentin's medium-security facility is an improvement, and the players in the Shakespeare company are the most friendly inmates, she says, because they "see" her.

It was not lost on me that I was in a roomful of serious felons, many of them murderers. Yes, these men can relate to Roman violence. Richie Morris, who played a soldier in on the conspiracy, observed, "The very thing the conspirators didn't want is what they got." Big Az wrote off assassin Brutus and his gang of co-conspirators as men driven by "petty jealousies." He also noted that all the major characters die, with the exception of Mark Antony -- and Antony eventually comes to a bad end.

Even with the dramatic arts, San Quentin is still a prison. Solano State Prison officials had to postpone a recently scheduled production of "Julius Caesar" after an inmate was killed in a riot. (A prison spokesperson told me none of the 13 inmates in the Shakespeare troupe had participated.)

Why Shakespeare? John Windham (Octavius) admitted that at first, Shakespeare "felt foreign." He couldn't understand the language; now he does. Clearly, the Bard's prose was part of the draw; it presents a challenge. Lady Jae had not been exposed to Shakespeare before prison. "But once you get to learn the language and how he writes," she boasted, "it reads like a Dean Koontz novel."

"A therapy group is what it really is," said Tony Passer (Cicero), "to show we're people who can be trusted in society." I quibble with that assertion. The real window into these men's souls is not their performances but the fact that they stayed out of trouble, improved their security rating and made it to this moment on the stage. I'll trust metrics -- improved inmate scores based on good behavior and program participation -- over theatrics.

Yet it is in everyone's interest that those who have a chance to return to civil society have a strong sense of who they are and an ability to thrive in a free world. All of the troupe's members are eligible for parole. May their time in the troupe better prepare them for life outside the prison walls. "I've seen it absolutely change their lives," Currier assured me.

For those who never make it out, there is room to dream. "I could be bounded in a nutshell and count myself a king of infinite space," quoth Hamlet. One inmate marveled, in a chapel with no bright lights, "This is our Broadway." Before showtime, Upu Ama (Titinius) told me, "I got the feeling I'm not even in prison today."