Rand Paul Is Not Neutral on Anything 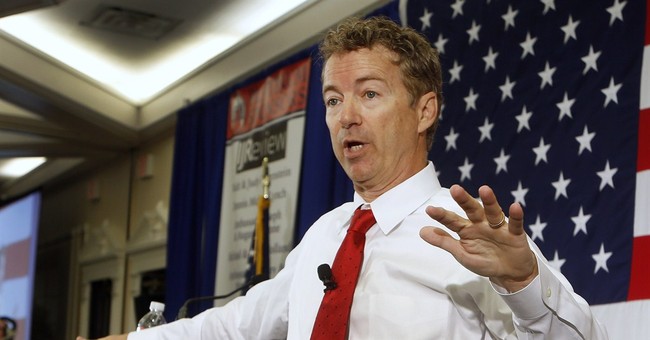 Sen. Rand Paul, R-Ky., wants to be "a different kind of Republican." And he is. His campaign is joining San Francisco's sharing economy by renting shared space. That should appeal to young voters. On Saturday, from the South of Market incubator StartupHouse, the GOP presidential hopeful proclaimed, "What we want is a government that leaves us alone."

The event was not a fundraiser. It was something almost unheard of -- free. And it featured a Q&A moderated by a member of the media, reporter Carla Marinucci of the San Francisco Chronicle. Local GOP political consultant Matt Shupe, 30, told me that it was the first time since he entered politics that a GOP presidential hopeful had set up shop in San Francisco. "When you have San Francisco progressives shaking Google buses and trying to get rid of Uber and Airbnb," Shupe added, that spells opportunity for Republicans.

The crowd of 100 was mixed with techies and politicos. The event was sponsored by Lincoln Labs, a libertarian-leaning tech group, and Brigade, a civic engagement concern funded by former Facebook President Sean Parker. Facebook and Google are big-time supporters of net neutrality, the concept that the government should prevent Internet providers from charging higher prices for fast lanes. Paul has introduced a resolution urging the Senate to repeal the Federal Communications Commission's recent net neutrality order.

Don't think that Paul was afraid to challenge his new base. Marinucci cited a University of Delaware poll that found 81 percent of Americans -- and 85 percent of Republicans -- support net neutrality. Yet in the belly of the beast, Paul stuck to his free market principles. Paul, 52, responded, "I would say it depends on how you ask the question. So let's redo the poll in an imaginary way. Let's ask the question: How many of you believe the Internet should be regulated?"

Folks may naturally protest the idea of Internet providers charging more for faster service, but, Paul said, "is it really terrible for FedEx to charge more to deliver a letter in one day than in five days?" The marketplace is all about charging more for speed and location. If you believe in the marketplace, you don't want the government setting prices. The senator voiced a pure libertarian position.

"Wow, it's never been argued in that way before," Shupe later told me. "While I was sitting there in that room, I agreed with it." Only later did the Republican wonder whether Paul's larger plan for increasing broadband competition would be workable. There is no question, however, that the senator from Kentucky was "philosophically consistent." He's also the only Republican in the 2016 field who could draw a friendly South of Market crowd on a Saturday afternoon, tell them things they didn't want to hear and leave behind new fans.