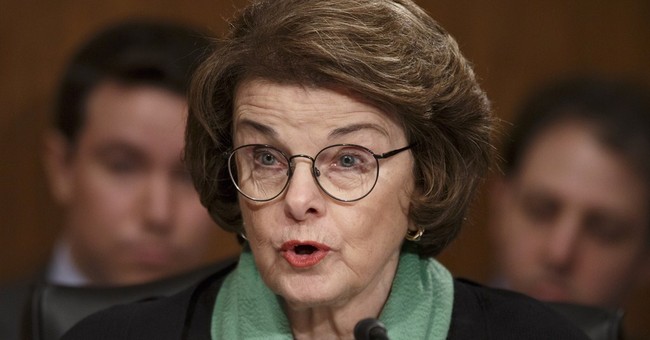 Sen. Dianne Feinstein is a woman on a mission. As chairwoman of the Senate Intelligence Committee, she has set out to prove the illogical -- that enhanced interrogation techniques used for a time under the George W. Bush administration constituted torture and that they never produced useful intelligence. Americans are supposed to believe that top terrorists are likelier to divulge information if they are lawyered up and politely asked questions.

In 2009, DiFi launched a committee investigation into CIA detention and interrogation practices under Bush. Staff examined more than 6 million documents and produced a 6,200-page report with a 510-page summary. When it is released, Feinstein assures the public, it will prove that the enhanced techniques -- including waterboarding, slapping and sleep deprivation -- did not work. First the verdict and then the investigation.

Committee Republicans refused to vote for the report and plan on releasing their own minority report.

Ranking GOP Sen. Saxby Chambliss of Georgia praised Feinstein for being committed to "doing everything she can to ensure the safety of America" before he addressed the Commonwealth Club of California on Monday. But as to her assertion that harsh measures yielded no usable information, he said, "nothing could be further from the truth."

Chambliss credits those methods with preventing terrorist attacks since 9/11. Former CIA acting Director Mike Morell has written that information that led to the capture of Osama bin Laden "came from detainees subjected to enhanced techniques." Former CIA Director Leon Panetta has written to the same effect.

But Feinstein won't see it. Perhaps she does not want to know. While committee staffers pored through millions of documents, they failed to interview key CIA officials. Robert L. Grenier, former director of the CIA Counterterrorism Center, wrote on The Huffington Post that the committee didn't question him or "any CIA employee, past or present."

Feinstein spokesman Tom Mentzer explained that the committee did not interview any CIA personnel because a criminal investigation made it impossible for the CIA to compel personnel to testify. Besides, interviews "were not necessary because of the comprehensive documentation provided by the CIA."

But Grenier wrote, "Many of my former colleagues, myself included, would have been more than happy to testify, legal jeopardy or not." Too bad no one asked.

The timing of the report's release could not be worse for Democrats. With the Islamic State taking root in Syria and Iraq and the Taliban leaving pools of blood across Afghanistan, the Senate Intelligence Committee has spent five years and $40 million to dig up information on techniques not practiced for years and previously investigated by Department of Justice officials.

The Senate probe thus serves as a warning to intelligence workers of the double standard in Washington: President Barack Obama can order "surgical" drone strikes that target terrorists and kill civilians, but intelligence staff had better not waterboard anyone, because that would go against the precious values of Obama and Feinstein.