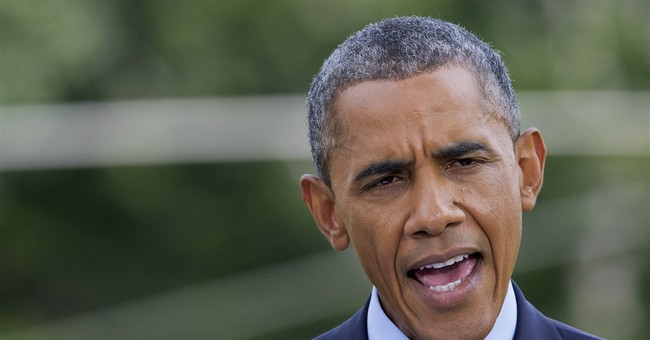 In June, President Barack Obama sent a letter to Congress asking for help to address the surge of illegal crossings at the Texas-Mexico border. Among other items, Obama asked Congress to grant him the legal authority "to exercise discretion in processing the return and removal of unaccompanied minor children from non-contiguous countries like Guatemala, Honduras, and El Salvador."

The administration blamed a 2008 anti-human-trafficking law signed by President George W. Bush for preventing officials from promptly deporting minors not eligible for asylum.

So what did Obama do? He left that reform out of the $3.7 billion emergency border package he sent to Congress.

"Suddenly, magically, there was no reform," observed Don Stewart, spokesman for Senate Minority Leader Mitch McConnell. "There was just money."

What happened? Early on, Sen. Dianne Feinstein, D-Calif., an author of the Wilberforce law, maintained that the law includes an "exceptional circumstances" clause, which would allow authorities to modify how they process the more than 50,000 unaccompanied minors who are here now, largely from Honduras, El Salvador and Guatemala.

Having witnessed the chaos at the border, Rep. Henry Cuellar, D-Texas, crossed the aisle to work with Sen. John Cornyn, R-Texas, to offer a bill to treat unaccompanied minors from Central America's Northern Triangle the same as children from Mexico. As Cornyn argues, a bill that was supposed to shield children from human traffickers has had the unintended consequence of boosting business for human smugglers to use children as "commodities."

A July Pew Research Center poll found that 53 percent of those polled want Washington to speed up deportations of asylum seekers, whereas 37 percent oppose a change in policy.

But this White House doesn't move to the center. Ditto the Democratic leadership. Sen. Robert Menendez, D-N.J., maintains that the 2008 law has had no role in the surge of unaccompanied minors. House Minority Leader Nancy Pelosi protested to MSNBC, "The baby Jesus was a refugee from violence."

In Majority Leader Harry Reid's Senate, there are no enemies to the left. Once a Democrat opposes an item because it's not liberal enough, moderate Democrats shut up and back off.

Reid spent the week threatening to add last year's big Senate immigration bill to any measure passed by the House, apparently just to poison the well in the House.

Though the Senate forwarded a $2.7 billion emergency bill in a procedural vote Wednesday, it will fail absent a Wilberforce reform. Already, GOP senators and three at-risk Democrats have announced their opposition.

As Congress is scheduled to begin a five-week recess, don't expect Obama or Reid to support the White House's erstwhile request. In Obama and Reid's Washington, there is no crisis that cannot be prolonged for politics.

Sean Hannity has no fear of a CNN host who looks like a mythical character in a nursery rhyme.
Redstate
Report: Trump dumped acting DNI because he mistakenly thought deputy had secretly briefed Adam Schiff; Update: About Russia trying to help Trump in the election?
Hotair