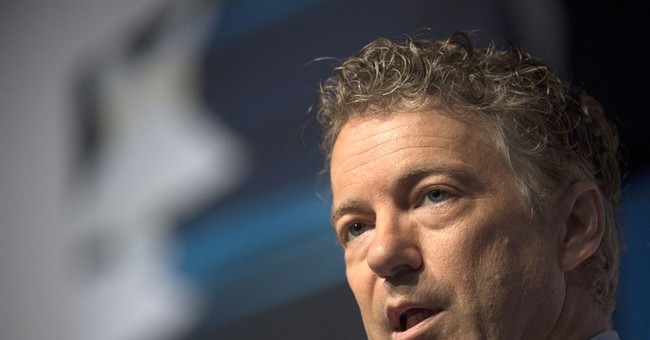 Who will be the GOP nominee in 2016? I don't know, but I have a pretty good idea who the running mate will be: Sen. Rand Paul of Kentucky. Unless Paul is the nominee.

You'd expect the audience to be simpatico. Tech geeks and libertarians have so much in common. Both tend to be male, young and much impressed with their own intelligence.

Though libertarian thinking may seem sink-or-swim, Paul showed how less government is good for the hip and trendy sharing economy. He hailed companies such as Uber and Lyft as "so popular you can't stop them."

While other Republicans evoke the good old days of the Grand Old Party, Paul looks to the future. "Capitalism steams on," Paul argued. Don't trash capitalism; without free markets, others won't be able to succeed.

The Kentucky Republican didn't need to remind the crowd that in Democratic San Francisco, some politicians are mobilizing against Airbnb. Regulation is the enemy.

The tech crowd ate up Paul's jeremiads on another case of big government: National Security Agency overreach. And the techies didn't need to be reminded of Paul's 13-hour "talking filibuster" against the surveillance state, which pressured Attorney General Eric Holder to concede that President Barack Obama does not have the authority to order a drone strike against a U.S. citizen on American soil without a trial.

Under-40s also go for Paul's long-standing criticism of excesses in Washington's war on drugs. Sen. Cory Booker, D-N.J., and Paul have introduced a measure to allow nonviolent offenders to seal their criminal records. John Dennis, a longtime supporter from San Francisco, believes that such measures could help Paul among African-American voters.

On foreign policy, Paul risks alienating traditional conservatives while drawing votes from the middle. In June, the senator refused to blame Obama for the inroads Islamist separatists have made in Iraq. Former Vice President Dick Cheney was so angry with Paul that he dismissed him as an "isolationist." I'm not comfortable with Paul's willingness to cede American leadership in an ugly world, but for most voters, Cheney's censure is practically an endorsement.

Paul, of course, remains very conservative. He likes the minimum wage the way it is. He told the techies that he believes in a safety net but a safety net in which welfare recipients work. He doesn't sound old when he says it.

"I am 100 percent pro-life," Paul, 51, boasts on his Senate website. "I believe life begins at conception and that abortion takes the life of an innocent human being."

Dennis told me that Paul holds socially conservative positions with which he personally disagrees. But he's on board because Rand Paul is "a pretty good gateway drug to the 'conservatarian' position."