The Good War and the Bad Afghan Leader 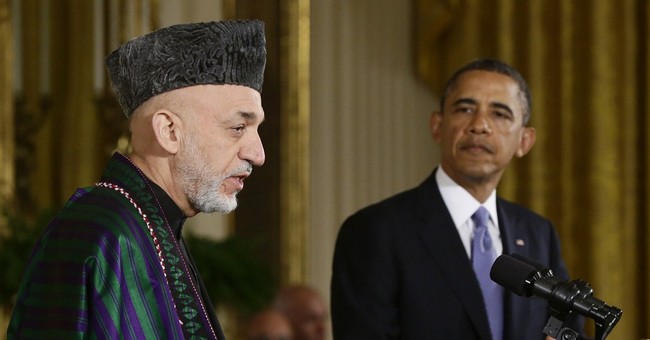 Obama let it be known that because Karzai is unlikely to sign a bilateral security agreement -- essential to keeping some U.S. troops in Afghanistan after 2014 -- he had asked the Pentagon to work on a plan to withdraw all troops before 2015.

Obama has good reason to want to cut Karzai off at the knees. Karzai won't sign the security agreement despite unanimous support from the Loya Jirga, a council of elders with political say in Afghanistan. He released 65 Taliban from the Bagram prison despite U.S. protests that the detainees had been involved in attacks that wounded coalition and Afghan forces.

"The Afghan people have been amazing allies," House Armed Services Committee Chairman Buck McKeon told the National Press Club on Monday. "President Karzai has not." Even before the Karzai phone call, McKeon was concerned that Obama might go soft on the mission.

In 2008, Obama was something of a hawk on the region. He appalled Hillary Clinton when he said that he would pursue "actionable intelligence about high-value terrorist targets" in Pakistan whether President Pervez Musharraf liked it or not. He argued that unlike Iraq, Afghanistan was a "war of necessity" and "the right battlefield."

At the 2008 Democratic National Convention in Denver, he pledged, "I will end this war in Iraq responsibly and finish the fight against al-Qaida and the Taliban in Afghanistan."

Toward that end, Obama ordered a surge of 30,000 troops in 2009. Unfortunately, he signaled a lack of resolve when he also announced that he would start to withdraw surge troops in mid-2011.

As he wrote in his memoirs, "Duty: Memoirs of a Secretary at War," former Defense Secretary Robert Gates concluded that the president "doesn't trust his commander, can't stand Karzai, doesn't believe in his own strategy and doesn't consider the war to be his. For him, it's all about getting out."

McKeon is baffled as to why Obama doesn't talk up the good news coming out of Afghanistan. As the April presidential election looms, major candidates support the security agreement. Afghan national security forces have come a long way, although they still need U.S. support.

But with Operation Enduring Freedom's death toll exceeding 2,300, U.S. support is weak. In November 2001, less than 1 in 10 Americans saw the war as a mistake. Now, Gallup reported this month, "Americans are as likely to say U.S. military involvement there was a mistake as to say it was not."

Tom Umberg, a former Democratic state assemblyman in California and an Afghanistan War veteran, disagrees. "We still have a clear national interest there," he told me. At this very moment, there are children attending schools where they are planning to kill Americans and U.S. allies. "They are our sworn enemies."

The question Americans should ask themselves, he added, is whether they want Afghanistan to return as "the petri dish for terrorism that it once was."

Obama has every right to demand a signed agreement as a condition for continued but limited U.S. military support. But voters should be aware that if Washington were to withdraw all troops from Afghanistan, the war might be over, but the threat would not.