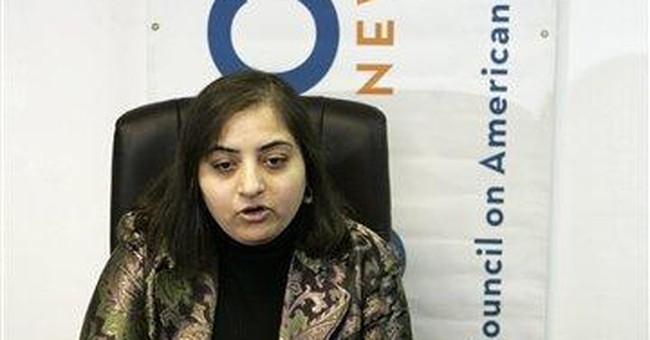 "Political correctness can lead to some kind of paralysis, where you don't address reality," Juan Williams observed rather prophetically on Bill O'Reilly's show Monday night, before he made the comments that got him fired from his assignment as senior news analyst for National Public Radio.

This is what Williams said: "I'm not a bigot. You know the kind of books I've written about the civil rights movement in this country. But when I get on the plane, I got to tell you, if I see people who are in Muslim garb and I think, you know, they are identifying themselves first and foremost as Muslims, I get worried. I get nervous.

"Now, I remember also that when the Times Square bomber was at court, I think this was just last week. He said the war with Muslims, America's war, is just beginning, first drop of blood. I don't think there's any way to get away from these facts."

Williams tempered those remarks with the caveat that President George W. Bush clearly stated that America is not at war with Islam. And: "Wait a second though, wait, hold on, because if you said Timothy McVeigh, the Atlanta bomber, these people who are protesting against homosexuality at military funerals, very obnoxious, you don't say first and foremost, we got a problem with Christians. That's crazy."

Too late. Williams already had handed ammo to the Council on American-Islamic Relations. _CAIR National Executive Director Nihad Awad called on NPR to investigate Williams on Wednesday. In a statement Awad charged, "NPR should address the fact that one of its news analysts seems to believe that all airline passengers who are perceived to be Muslim can legitimately be viewed as security threats."

CAIR is an identity-politics organization that trolls for opportunities to take offense. Whenever anyone acknowledges the nexus between terrorism and radical Islam -- not Islam, but radical Islam -- CAIR cries foul. Wednesday afternoon within hours of the CAIR complaint, NPR rewarded CAIR's campaign of intimidation with a scalp.

NPR announced it had severed its contract with Williams, as his remarks "were inconsistent with our editorial standards and practices, and undermined his credibility as a news analyst with NPR."

On Thursday, NPR President Vivian Schiller denied that the firing was about Fox News. I don't buy that. _As Politico reported last year, NPR tried to pressure political correspondent Mara Liasson to sever her ties as a commentator on "Fox News Sunday" and its "Special Report." In 2009, NPR asked Williams to not use his NPR identification when appearing on "The O'Reilly Factor." (Monday night, O'Reilly no doubt tweaked NPR management when he said to Williams, "You actually work for NPR, OK?")

Indeed, NPR ombudsman Alicia Shepard told "Talk of the Nation" Thursday that the network should have given Williams an ultimatum -- NPR or Fox News.

Eric Boehlert of the left-wing MediaMatters used Williams' firing to call on NPR to sever its association with Liasson, as well. Wrote Boehlert, "I'm not suggesting Liasson has said anything as offensive as Williams, or that she has that kind of track record while appearing on Fox. I'm just saying that if you look at NPR's code of ethics, there's simply no way Liasson should be making appearances on Fox."

What an insidious pursuit. MediaMatters lives to pillory Fox News for being too conservative -- at the same time, it tries to drive moderate commentators off Fox programming.

I've talked to people at CAIR and MediaMatters. I know folks who work for NPR. They all think they're smart, and yet they've just sent a bonehead message to the American public.

Way to go, ye titans of tolerance. You've just broadcasted that an African-American moderate with a solid civil-rights record can lose his job and be branded as a bigot for quoting a convicted terrorist and admitting to a moment's hesitation if he sees someone in Muslim garb on a plane.