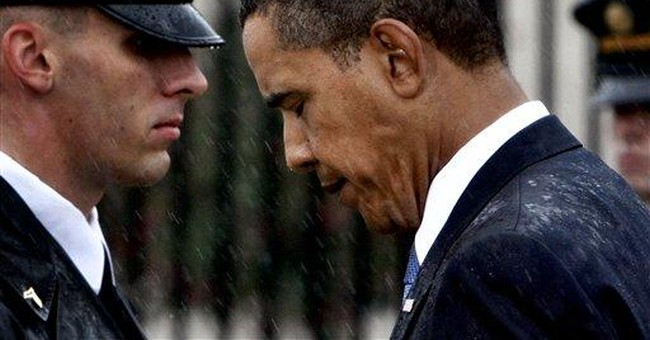 Toward the end of his speech on health care Wednesday night, President Obama said that he had been thinking a lot about the phrase "the character of our country."

Too bad the president's speech had all the character of a free lunch. Obama argued for the moral imperative of providing quality health care for all Americans -- but it's not such a moral imperative that most people should have to pay for it.

In fact, he promised a load of goodies, starting with access to health care for America's 47 million-plus uninsured. House Bill 3200 would provide subsidies for families of four making up to $88,000. It also mandates that insurers would have to cover not only individuals with pre-existing conditions, but also would have to end co-payments for routine checkups and preventive care.

At the same time, Obama said, "most of this plan can be paid for by finding savings in the existing health care system -- a system that is currently full of waste and abuse."

I'm always amazed by the educated people who buy the fable that universal health care will reduce emergency-room visits -- and hence practically pay for itself.

Wrong. As The Week magazine reported, after Massachusetts passed a universal health care plan, "demand at emergency rooms has only increased; more people are seeking medical care because they are insured, but there are not enough general practitioners to treat them."

Some have read a June New Yorker piece about the high cost of health care in McAllen, Texas, compared to costs at the Mayo Clinic and other facilities that offer quality care for less money. Obama himself has suggested that switching to best practices could pay for most of his plan.

I asked Stanford University health economist Victor R. Fuchs: Why not make all plans like Mayo? "There's nothing wrong with that," Fuchs replied, "except it's very hard to do." If everybody could do it, everybody would do it. The rest of ObamaCare would be funded by taxing the rich. Problem: As Fuchs wrote in the latest Journal of the American Medical Association, "It is impossible to collect enough taxes from those with incomes of more than $110,000 to subsidize the poor, and the sick and also help the numerous middle and upper-middle income households."

I agree with Obama on some issues. When he spoke of a Texas woman whose insurance company canceled her policy while she was about to have a double mastectomy, Obama asserted, "That is heart-breaking, it is wrong, and no one should be treated that way in the United States of America."

He's right. No insurer should be able to pull coverage for sick people. Period. Also, Washington should pass a law that guarantees access to care for those with pre-existing conditions. But don't tell me everyone can get more health care on the cheap. Obama's big mistake was in not making health care the focus of his stimulus package by starting with a plan to offer health care vouchers to every American. Such a package could have funded training for the under-employed to fill good health care jobs. It also could have soothed working families' anxieties about being wiped out by an illness and removed a pricey obstacle to the creation of new private-sector jobs.

But after the Bush TARP plan and Obama stimulus package, the public seems to have lost its appetite for unfunded promises. They end up costing too much.