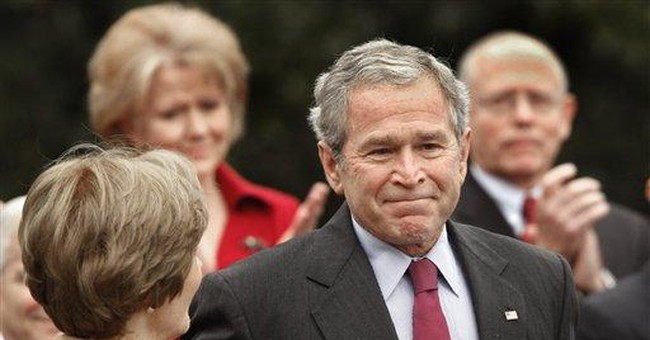 The San Diego Union-Tribune reported Nov. 2 on the effort to petition President Bush to commute the sentence of former Rep. Randy "Duke" Cunningham, who pleaded guilty in 2005 to accepting some $2.4 million in bribes. The president has the constitutional power to pardon federal offenders by wiping clean their prison records for sentences served or by commuting the sentences of inmates in federal prison.

Before Bush even considers such a request, he ought to take a long look at the thousands of petitions for a presidential pardon filed by inmates who have never served in elective office. He could start with the case file of Clarence Aaron, who at age 23 in 1992, while a student at Southern University at Baton Rouge, made the criminal decision to introduce two drug dealers, which resulted in a transaction involving 9 kilograms of cocaine.

Aaron broke the law and the fitting consequence for that is a serious prison stay. But because Aaron was a newbie to the drug trade and did not have the experience with the criminal justice system that would have led him to testify against the trade kingpins in exchange for a lighter sentence, and because his five co-conspirators knew enough to 'fess up and turn on him while he wrongly and stupidly denied any guilt, Aaron was handed the longest sentence in the group. He was a first-time nonviolent drug offender -- but a judge sentenced him to life without parole.

Having entered prison as a young man, he will die there unless a president pardons him. There is something rotten to the core in a justice system that puts a twenty-something first-time nonviolent offender away for life, while meting out lighter sentences for career criminals who know how to game the system. Life without parole also is the same sentence imposed on FBI-agent-turned-Russian-spy Robert Hanssen, except that it is worse for Aaron, who was sentenced in 1992. Hanssen was arrested at age 56.

It turns out Aaron's most heinous offense was not the drug deal, but not having spent years getting arrested and learning how to roll through the criminal justice machine.

I know that I will hear from law-and-order types who will argue that all drug dealers should go away for life. I do not think many would feel so sanguine about such a term for a white college student. (Aaron is black.) As it is, the world is not a safer place with Aaron behind bars. It is a poorer territory that throws away people because of a warped sentencing formula that ensnares the unwitting and spits out the truly dangerous.

Aaron, now 39, has admitted his wrongdoing and taken responsibility for the actions that put him behind bars. He has a clean prison record. In 2005, two wardens recommended that he be moved to a lower-security facility.

Bush has a pretty stingy record when it comes to granting presidential pardons and commutations. He has granted a mere 163 pardons -- a figure far lower than President Ronald Reagan's 406 back when the federal prison population was much smaller.

No doubt, President Bill Clinton's sleazy fire-sale pardons on his way out of the office -- which were roundly and deservedly criticized -- have made Bush reluctant to use his absolute power of pardon.

Also, as Texas governor, Bush was burned when he pardoned a one-time misdemeanor drug offender so that he could work in law enforcement, only to watch Steve Raney be arrested for stealing cocaine during a roadside arrest four months later.

For all of the above reasons, critics in the pardon community pretty much have given up on Bush commuting Aaron's sentence. They have put their hope into clemency from President-elect Barack Obama, who has been critical of the draconian federal mandatory minimum sentencing system. They believe that Bush will reserve his pardon power for political operatives, and ignore excessive sentences imposed on the unconnected.

So far, the critics have been right. Last year, Bush commuted the 30-month prison sentence of former vice presidential aide Scooter Libby because it was "excessive." But he has yet to commute the sentence of Clarence Aaron. Aaron should be spending this Thanksgiving and Christmas with his mother and his family. And only President Bush can make that happen.