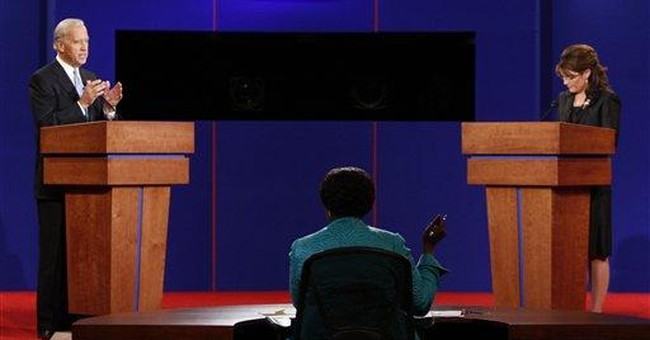 Sure, she had moments when she seemed to be working too hard trying to remember what she was supposed to say so she awkwardly regurgitated a string of campaign buzzwords. Who cares? She didn't crash. And she showed Americans a candidate who does not speak Beltway-speak.

Democrats used to crow about that common touch with Bubba. Well, meet Bubbette.

Biden showed more fluency on foreign policy, to be sure. You know he would do a better job on a pop quiz on Israeli-Palestinian relations. When he talked plain, however -- as when he hit the McCain $5,000-per-family health care tax credit -- Biden scored.

But Biden also stumbled when he too theatrically stifled laughter at Palin's answer to moderator Gwen Ifill's question about executive authority. "Do you believe as Vice President Cheney does, that the executive branch does not hold complete sway over the office of the vice presidency, that it is also a member of the legislative branch?" Ifill asked.

Palin clearly did not understand that the question was a swipe at Cheney's assertion that his office did not need to comply with national security disclosure rules required of other executive branch agencies. And she gave a school-kid stalling answer to the question.

That said, Biden's theatrics were, well, undisciplined. Arrogant even.

Some Americans tuned into the debate to find out whether Palin could go toe to toe with Vladimir Putin. The answer, I think, is that she would know how to take advantage of being underestimated. (I can hear her now: "Can I call you Vladimir?" Okey dokey.)

Thus Biden felt safe to claim, "With regard to Iraq, I indicated it would be a mistake to -- I gave the president the power. I voted for the power because he said he needed it not to go to war but to keep the United States, the U.N. in line, to keep sanctions on Iraq and not let them be lifted."

If Biden is so smart and savvy and experienced, how could he have been so stupid about his war vote?

"Oh, yeah, it's so obvious I'm a Washington outsider," Palin countered, "and someone just not used to the way you guys operate. Because here you voted for the war and now you oppose the war."

Palin's other job was to show America that she is not an intolerant right-wing kook. And she did so deftly on the issue of expanding benefits to same-sex couples, as Alaska does.

"Well, not if it goes closer and closer towards redefining the traditional definition of marriage between one man and one woman," she answered.

But: "I also want to clarify, if there's any kind of suggestion at all from my answer that I would be anything but tolerant of adults in America choosing their partners, choosing relationships that they deem best for themselves, you know, I am tolerant and I have a very diverse family and group of friends and even within that group you would see some who may not agree with me on this issue, some very dear friends who don't agree with me on this issue."

Camp McCain can breathe a sigh of relief. But first, campaign staffers should kick themselves for over-handling the Alaska governor.

Then McCain better get to work shaming Congress for larding the bailout bill with all that pork and working to get both houses to pass a bill that revokes the extra spending heaped onto this shameful package.

It's too bad Palin didn't hit Biden harder for being part of the big-spending Washington culture that can't get difficult things done, but sure knows how to spend money it doesn't have. But there will be no shortages of opportunities for both McCain and Palin to do so in the future.

Reagan McCarthy
PA Republican Who Vowed to 'Get S**t Done' in Washington Receives Endorsement From State Official
Reagan McCarthy
A Permanent Mask Mandate? One State Is Considering It
Leah Barkoukis