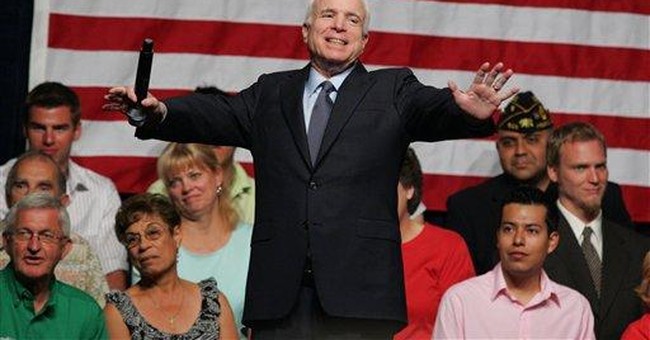 He is so not tech savvy that he actually favors town hall meetings, which brought him to Fresno State University on Monday. He still cannot read a teleprompter. He hangs onto that microphone as if it is 1979.

McCain's supporters look at the charisma-oozing, swoon-inducing Barack Obama and sigh that the GOP nominee is hopelessly out-cooled. He's 71. He's so old that he actually served in the military. He's so old his trophy wife is in her 50s. He tells old jokes. Like: In Arizona, it's so dry the trees chase the dogs.

Yet somehow when he addressed this gathering of 600 of the young, the old and the in-between in Fresno, he may not have had any women fainting as he worked the crowd, but there were signs of respect. Even people who kept their arms folded when McCain explained why he would not set an artificial timetable for withdrawing U.S. troops from Iraq applauded at the end.

Call it the decency factor.

Even those who disagree with him have to respect that on Iraq, the one issue on which so many politicians have flip-flopped, McCain has stood firm.

Monday's town hall focused on energy. This was not like your typical San Francisco audience. There was applause for McCain's support for nuclear energy. Sure, there were biofuel and solar fans, but one attendee chided McCain for opposing drilling in the Arctic National Wildlife Refuge.

Maybe it's the price of gas, but this audience seemed largely in sync with McCain's shift from supporting a ban on offshore drilling in Florida and California, to now saying he wants to see an end to the federal moratorium on offshore drilling, and let state voters decide.

Does this mean Californians should choose to drill? "Sure, I'd love for them to, but again I leave that decision up to them," McCain answered at a press conference after the town hall. Yes, it was a politician's answer.

But here is the not-very-political part. As Sen. Lindsey Graham, R-S.C., said during a conference call, the problem with the presumed Democratic nominee, Barack Obama, is that he never tells the left something it doesn't want to hear. McCain still tells the GOP base things that make them bristle.

And there is a philosophical cohesion to McCain's proposals. McCain understands that energy is a national security issue. Thus, he wants to increase supply, not only with more drilling, but also with more biofuels. He also advocates conservation and increased automobile fuel-efficiency standards. He calls for eliminating sugar tariffs that drive up the cost of ethanol and proposes a $5,000 tax credit for Americans who buy zero-emission vehicles.

Do I go for the whole spiel? Hell, no. I liked the woman who challenged McCain's enthusiasm for all-electric cars, by asking, "How are you going to charge all those electric cars?" But I do like the fact that McCain is willing to tell everyone things that he specifically knows they will not like.

You have to respect that.

Yes, his delivery is hokey. There's a lot of stuff in McTalk that your mother told you -- make that your grandmother.

But if Al Gore supporter/consultant Naomi Wolf could discover in that former presidential candidate a "nerd-visionary instinct" and a "Blakean deep inside," surely some guru in McTeam can find the right spin.

Is there such a thing as geezer chic?