Trump Won, Comey Minus One

David Limbaugh
|
Posted: Jun 09, 2017 2:15 PM
Share   Tweet
The opinions expressed by columnists are their own and do not necessarily represent the views of Townhall.com. 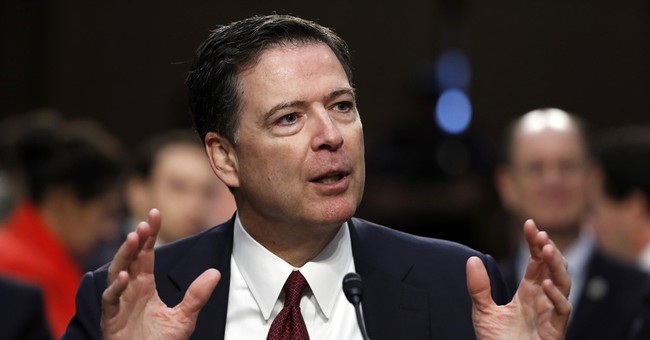 Trying to be objective -- and that's sometimes difficult for me when it comes to politics -- I don't agree that former FBI Director James Comey's congressional testimony was equally good news and bad news for President Trump. Trump came away a decisive winner.

Most agree that Trump benefited from Comey's admission that Trump was not in fact under FBI investigation for colluding with the Russians or for anything else. But many Trump critics, left and right, see Comey's negative portrait of Trump as so damaging as to cancel out the positive news, which, on reflection, is incorrect.

It's true that Comey painted Trump as dishonest, petty and vindictive and as one who operates in office as a business executive rather than someone who respects the parameters of his authority. Even if true, is this caricature news to anyone? Trump's critics already believe it, and most of his supporters believe it is overstated.

This is not to say that Trump's defenders would approve of any abuses of authority, but they aren't predisposed to assume that every unorthodox action on Trump's part is malicious or indicative of a tyrannical or criminal mindset.

So the only "news" that emerged from Comey's testimony -- the only facts that might change the status quo ante -- was that Trump has not been under investigation this whole time. Not only that but he did not pressure or even attempt to persuade Comey to go softly on any of his associates on the Russia investigation if it were discovered they had some illicit interaction with the Russians.

For some, Comey landed a blow against Trump in alleging he told Comey he "hoped" the investigation against Flynn would end and in requesting from Comey "honest loyalty." Here again, Trump's attackers are predisposed to assume Trump was using code to direct Comey to stop investigating Flynn and to pledge his loyalty to Trump above his professional duties. Trump's defenders reject that, so on this issue, the needle didn't move a centimeter in either direction.

Some might say: "Hold on. This isn't just a matter of Trump supporters believing one way and his defenders another. Comey was the only one in the room, and he took Trump's words as directives."

Well, even if you assume that's what Trump meant, which I don't, legal experts agree that no one has been charged with obstruction of justice on such vague language as "hope." The thought of it is preposterous. Moreover, some experts argue that as chief executive, he has the power to end investigations conducted by the executive branch. Let's remember that the Flynn investigation and Russia investigation are two different matters and that Trump is not the target of either one of them. If it occurred, it would have been inappropriate behavior but hardly criminal or impeachable conduct.

But I don't believe that Comey's inferences are accurate. Trump is an advocate by nature and is loyal to his friends. It's perfectly reasonable to assume that he was just expressing his vote of confidence in Flynn's character and was by no means suggesting that Comey ignore hard evidence against him, much less directing him to.

I have a hard time believing that Comey really thought at the time that Trump was giving him orders. If he really believed so, then it is indisputable that he acted improperly at the time and thereafter. If he really believed Trump was trying to obstruct justice, he had a duty to do something about it, but instead, he decided to hold it close to the vest and only use it if he needed it later. Is that the way a man in his position should have behaved?

As to Trump's firing of Comey, if you were Trump, wouldn't you be outraged if Comey refused to disclose that you were not under investigation when everything else was leaked -- as Sen. Marco Rubio noted? Didn't Trump have a right to be indignant over the lies being disseminated every day on this and a right to want to quell these lies that were impeding his agenda? Was it unreasonable for Trump to think Comey was biased against him, seeing as Comey refused to set the record straight on this matter when he'd certainly tried to set the record straight publicly on other issues before?

What about Comey's revelations concerning his own bizarre behavior? I was originally willing to believe that Comey was scrupulously aboveboard and would strive for objectivity -- that he would try not to allow his personal biases to color his objectivity or influence the course of the investigation or his assessment of the evidence. Based on his own testimony, I am now quite skeptical.

Comey bent over backward to conclude that Hillary Clinton had no criminal intent in the handling of her private emails -- yet his conclusion was in direct conflict with the evidence he meticulously detailed against her. It is hard to believe he would have given any other target such an enormous benefit of the doubt.

Yet despite his professed reluctance to infer criminal intent there, he leaped to such conclusions against Trump with the eagerness of a never-Trumper. "Hope" equals "You are hereby ordered"? Give me a break. "Loyalty" equals "I order you not to follow the evidence wherever it may lead you"? Come on now. These inferences wouldn't be reasonable for any investigator, but for Comey, who expressed reluctance to making inferences on intent, they are outrageous.

Comey damningly admitted he leaked information to a Columbia law professor in the hope that it would lead to the appointment of a special investigator. Some say Comey was within his rights as a private citizen. But as certain legal experts have noted, he acquired that information when he was working for the government, and it wasn't his private property. Comey holds himself out as the pinnacle of decorum but became a perpetrator of the very type of conduct he was self-righteously investigating.

Some applauded Comey's willingness to speak truth to power, but he admitted that he didn't object to Trump's allegedly improper overtures to him. In this hearing, Comey showed himself to be far too concerned with the public's perception about him and allowed his personal feelings and biases to interfere with his objectivity. In the end, he didn't lay a glove on Trump but significantly damaged himself -- and, as a bonus, exposed Barack Obama's second attorney general, Loretta Lynch, as a perpetrator of the very behavior others have improperly attributed to Trump.