Petty Partisanship From an Exiting Obama

David Limbaugh
|
Posted: Jan 06, 2017 12:01 AM
Share   Tweet
The opinions expressed by columnists are their own and do not necessarily represent the views of Townhall.com. 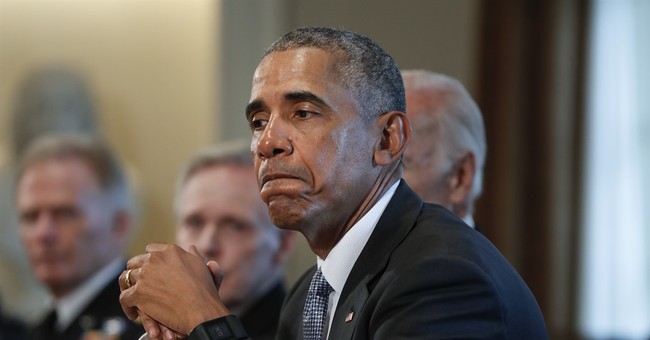 Trending
I don't know about you, but I feel a strong sense of optimism in the air. However, neither President Obama nor his Democratic Party shares it, and the Democrats are gearing up for obstruction mode -- not a renewed period of cooperation, which they always demand when they're in power.

American businesses are relieved that President Obama's anti-business boot will finally be lifted from their throats. They are energized by President-elect Donald Trump's promises to reduce their tax and regulatory burden and re-establish a pro-entrepreneurial climate.

We are already seeing concrete results. Ford announced that it is canceling its plans to invest $1.3 billion in a new manufacturing plant in Mexico and will instead devote $700 million to expand production in the United States. CEO Mark Fields said: "We look at all factors, including what we view as a more positive U.S. manufacturing business environment under President-elect Trump. And it's literally a vote of confidence around some of the pro-growth policies that he has been outlining, and that's why we're making this decision to invest here in the U.S."

Another positive sign comes from economists at HSBC Bank, who raised their forecast for global growth over the next two years based on robust manufacturing activity, a resilient China and, most of all, the fiscal boost expected to come in the United States.

President Obama has falsely claimed that the U.S. economy under his watch has been robust, but everyone knows better, and these optimistic signs we're witnessing in anticipation of the Trump presidency are proof of it.

But Obama and the Democrats will have none of it. They are not about to stand by while people criticize Obama's poor economic record. They must perpetuate the fiction that his leftist policies worked, so the propaganda continues.

After every presidential election in which their candidate wins, Democrats claim a strong mandate to advance their agenda and shame Republicans for resisting. When Republican George W. Bush won a narrow victory over Democrat Al Gore in 2000, they spent most of their time trying to delegitimize Bush -- falsely charging that he had stolen the election, which they had actually tried to steal themselves.

Trump won an impressive electoral victory in November, but Democrats have nevertheless denied he has any mandate at all, citing his loss in the popular vote and claiming Russian hacking helped him win. Both of these claims are bogus. Our presidents are elected by the Electoral College, not by the total popular vote, and under our system, Trump has a strong mandate. Not only was Trump's electoral victory decisive but also a shocking percentage of counties supported Trump, and the Republicans' level of control of state governments is staggering.

Democrats have signaled they are going to obstruct Trump's agenda from the get-go. What do you expect when their hero is in full-on Trump-sabotage mode on his way out of the Oval Office?

Democrats have already taken aim at Trump's proposed nominees, as opposed to the GOP's rapid approval of Obama's Cabinet appointees. Senate Minority Leader Chuck Schumer said Democrats will work with Trump only if he "moves completely in (the Democrats') direction and abandons his Republican colleagues." Can you imagine the outcry if Republicans had made such a statement toward Obama in 2008?

But Obama himself is leading the charge. The Hill reports that "Obama has taken a number of unilateral actions in the waning days of his tenure that appear designed to box in President-elect Donald Trump." The Hill, no liberal rag, is exactly right. Examples abound: his ban on oil and gas drilling across large swaths of the Atlantic and Arctic oceans, his closing off of 1.6 million acres of Western land to development, his eliminating a registration system used mostly on Muslim immigrants, his administration's abstention on the United Nations Security Council vote condemning Israeli settlements and Secretary of State John Kerry's subsequent speech maligning Israel on this issue, and Obama's sanctioning of Russian entities for allegedly influencing our presidential election. Obama is also planning to move ahead with his reckless plan to release more prisoners from Guantanamo Bay despite Trump's urging a halt to the process. And Obama made a trip to Capitol Hill to embolden Democrats to resist any GOP efforts to repeal Obamacare. The "bipartisan" exemplar met only with Democrats, urging them not to "rescue" Republicans by helping them to pass Obamacare replacement measures.

How can we not see the vindictiveness behind Obama's actions? He is now sanctioning Russia when, according to Sen. Tom Cotton, he actively blocked measures to take a firmer line on Russia during his term and when, according to former U.S. Ambassador to the United Nations John Bolton, he allowed the Russians to walk all over him for eight years.

On top of all this, Obama petulantly claimed that he could have won a third term if he had been permitted to run against Trump. He is just beside himself that the American electorate so resoundingly rejected his agenda. Obama also said that Hillary Clinton would have won in a landslide if young people had been the only ones who voted.

This is nothing but pure class from the man who promised to bring hope and change and a renewed spirit of bipartisanship to America.