David Limbaugh
|
Posted: Jan 22, 2016 12:01 AM
Share   Tweet
The opinions expressed by columnists are their own and do not necessarily represent the views of Townhall.com. 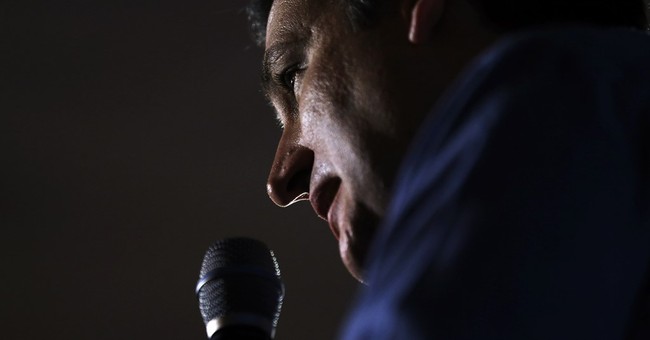 Trending
Some time ago I said that many establishment Republicans dislike Ted Cruz so much that they would even back their nemesis, Donald Trump, if necessary to keep Cruz from winning. This is one time I wish I had been wrong.

The establishment has long held Cruz in contempt but didn't believe he had any realistic chance of securing the GOP nomination. Now, with his campaign success, he's scaring their pants off. Former Republican presidential candidate Bob Dole has issued apocalyptic warnings against nominating Cruz, and I've just received an email that Sen. Orrin Hatch prefers Trump over Cruz as well.

Earlier this week, it was New York Times pretend-conservative columnist David Brooks who suggested a Republican conspiracy against Cruz and Trump in favor of any other GOP candidate. "Very few presidents are so terrible," he wrote, "that they genuinely endanger their own nation, but Trump and Cruz would go there and beyond." Setting aside this mindless conflation of Cruz and Trump, do you believe we should be taking advice about potentially bad presidents from a guy who drooled over candidate Barack Obama because of his trousers?

More and more insiders fear Cruz far more than Trump. Trump drives the establishment batty by ginning up his supporters against them and for his current hardline stance on immigration, but they have to know it hasn't been that long since Trump espoused a number of liberal positions and financially supported establishment figureheads in each party. As hard-nosed and independent as he seems, his track record reveals he is much more malleable and they'd have a better chance to influence him than Cruz.

Ted Cruz, on the other hand, has been a thorn in the establishment's side since he came on the scene. Insiders are astounded that he has actually refused to abandon his campaign promises and his commitment to Reagan conservatism, despite overwhelming pressure and derision from the party and its power brokers.

They have concluded that Cruz must be driven by egomania and not principle. Who but a stubborn, opportunistic loner could resist the temptation to rub elbows with the power brokers once elected? Only oddballs honor their constituents and grassroots conservative causes above those of the ruling class. Only charlatans continue to articulate conservative ideas with passionate optimism and idealism once in office. Only zealots evince an abiding dedication to Reagan conservative principles beyond what's necessary to get them elected. Only grandstanders would truly stand up to President Obama's reckless budget demands instead of throwing in the towel of surrender before the fight has even begun.

Why is it automatically presumed that Obama will win every game of chicken he insists on playing with Republicans? Why can't our side ever be confident enough in its own ideas and of the American people -- as Ted Cruz is -- to believe the people will back us if we call Obama's bluff and articulate our case to them? The establishment's rationale for caving has always been that Republicans, being the party of less government, can never win over the public in a shutdown showdown. They think that Cruz knows this too, but puts on a grandiose but futile show to play to the base and advance his political ambitions. Oh ye of little faith -- little faith, that is, in the conservative ideas you maintain you embrace. If only the establishment would join Cruz in promoting the principles they say they share, just as Democrats always support an uncompromising and extremist Obama, there's no telling what progress we could have made in thwarting some of Obama's agenda.

As I see it, there are two major differences between Republican supporters and opponents of Cruz. One is that his supporters are more consistently conservative on every category of issues. The fight, in other words, is not just about strategy, as the establishment insists, but also involves policy.

The second is that Cruz's supporters believe he is a man of integrity. Many of his detractors contend he is a phony, but I think their real fear is that he is not. He will not change his positions for expedience -- though many are working overtime to convince us otherwise.

The establishment, then, either believes or wants to fool us into believing that it opposes Cruz because he is a poseur, a saboteur of good government -- a man who impedes the cause of conservatism by his unwavering commitment to it. Only by compromise and pragmatism, they argue, can we really advance conservative principles.

The truth, however, is that they are not as committed to conservative principles as they say they are and don't regard the current problems confronting our nation with the same degree of urgency as mainstream conservatives. They also place a high value on process -- on bipartisanship and collegiality for their own sake -- even over advancing a conservative agenda. Not long ago I read that one establishment icon said he didn't think a Hillary presidency would be that bad. Seriously?

We finally have a candidate who is committed to conservative principles across the board, a man who reveres the Constitution and America, as founded, who acutely understands the destruction President Obama has wrought, and who we can rely on to fulfill his promise to do everything in his power, if elected, to reverse this disastrous course and restore us on a path to recovery.

If the establishment would quit hyperventilating over Ted Cruz and get behind him they could do more than anything else to advance the cause they profess to believe in.