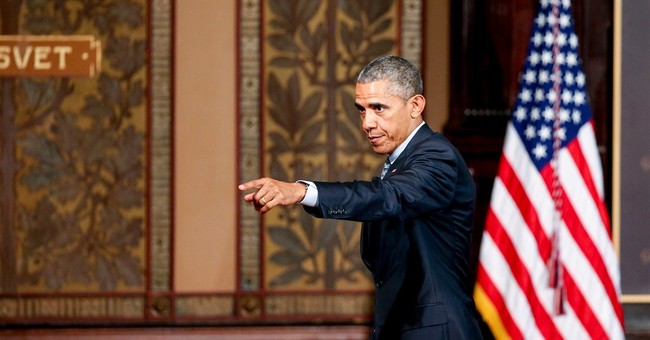 Trending
I watched President Obama's remarks on poverty at Georgetown University, and several things stood out to me, apart from his umpteenth swipe at Fox News.

Obama sometimes makes statements that sound reasonable and moderate, but he either doesn't believe the things he's saying or has an ideological blind spot about what they really mean. But his practice of saying such things, I think, is one reason that during the 2008 presidential campaign, some were fooled into believing he was bipartisan and a uniter.

He continues to decry extremism from both sides and implies his own position is decidedly more moderate. For example, at Georgetown, he said: "The stereotype is that you've got folks on the left who just want to pour more money into social programs and don't care anything about culture or parenting or family structures. ... And then you've got coldhearted free market capitalist types who are reading Ayn Rand and think (people are) moochers. And I think the truth is more complicated. ... (Some conservatives) deeply care about ... the poor, exhibit that through their churches, through community groups, through philanthropic efforts but are suspicious of what government can do. And then there are those on the left who, I think, are in the trenches every day and see how important parenting is and how important family structures are and the connective tissue that holds communities together and recognize that (when those structures fray) that contributes to poverty ... but also believe that government and resources can make a difference in creating an environment in which young people can succeed despite great odds. And it seems to me that if coming out of this conversation we can have a both/and conversation rather than either/or conversation, then we'll be making some progress."

The problem is that no matter how reasonable he can sound sometimes -- and it isn't that often anymore -- in practice, he's been anything but reasonable. He has pursued an extreme leftist agenda, leaving the left ecstatic, the perpetually clueless still ignorant, the credulous feeling a bit betrayed and those who had him pegged from the beginning unhappily vindicated. If you listen to all of Obama's comments instead of his occasional feints toward bipartisanship, you know he's anything but a moderate.

For instance, he said, "I think if you talk to any of my Republican friends, they will say, No. 1, they care about the poor -- and I believe them. No. 2, they'll say that there are some public goods that have to be made -- and I'll believe them. But when it comes to actually establishing budgets, making choices, prioritizing, that's when it starts breaking down."

Are you hearing him? He is saying some Republicans may think they care about the poor but, when the rubber hits the road, they really don't. Why? Because they won't adopt his leftist agenda wholesale. During budget negotiations, he's the one who refuses to compromise. He's the one who takes such extreme positions that by the time Republicans compromise, we end up with three-fourths of what Obama wanted -- such as with the sequester cuts, when they agreed to gut the military budget just to get Obama to agree to cuts, not in spending but in the rate of spending increases.

Obama has proved himself quite willing to use deceit when it serves his purposes, but I think the above are examples of his ideologically and narcissistically based tunnel vision. Like many liberal politicians and media figures, he sees his approach as the only possibly moral and reasonable one and anything deviating from it as being born of sinister aims, so he can't process opposition as ever being legitimate.

This mindset also explains Obama's repeated complaint, which he voiced again at Georgetown, that our society (because of Republicans) isn't willing to "invest" enough in "public goods," which is why the middle class and poor are hurting. This is depressingly devoid of reality. With more than $20 trillion of social spending over the years and no net progress (and much decline), how can anyone say there hasn't been enough of such spending? With $18 trillion of debt, how can Obama even consider spending more money we don't have, especially when he's improperly diverted so much money he promised to allocate to infrastructure?

Obama's incapable of considering that liberal policies haven't worked and making adjustments. If they haven't worked or haven't worked well or fast enough, it is always because we haven't gone far enough, a delusional excuse that will never run out of liberal policy failures to justify, because in theory, we could always spend more and further grow the government.

You can talk about extremes on both sides of the political aisle, but in fact, by far the greatest number of real extremists (among those in power and influence, at least) are in today's Democratic Party. Those Republicans whom liberals call extremists would be satisfied with achieving a mere moderate scaling down of the smorgasbord of extreme leftist policies implemented over the years. There isn't a Republican with any chance of electability who advocates wholly abolishing a societal safety net. Not even close.

So don't let Obama or other leftists fool you about either their own reasonableness or our extremism.