In Kansas, Obama Emulates Dorothy: 'Lions and Tigers and Capitalists! Oh, My!'

David Limbaugh  |  Dec 09, 2011
The opinions expressed by columnists are their own and do not necessarily represent the views of Townhall.com.
Top Columns
Trending on Townhall Media 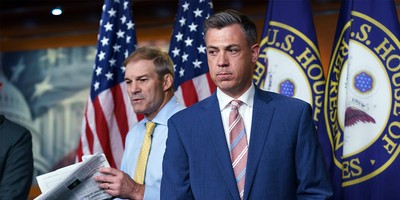 President Obama's much-ballyhooed speech in Osawatomie, Kan., was his best effort to put a happy face on class warfare. Though some were elated, fantasizing that he might be getting his messianic mojo back, even his reliable cheerleaders recognize there's no substance beneath the hot air rising.

Liberals get all dewy-eyed when Obama reverts to idealistic tones, as they are saps for perfect-world scenarios that never materialize. They love it when he co-opts history in service to their cause. So he traveled to Kansas seeking to identify with Teddy Roosevelt, the icon of rugged individualism, to lambast the evils of rugged individualism.

Obama misdiagnosed the problems facing America, distorted the historical record, set up straw men to excoriate, and conflated history and principles, all to demonize his opponents, divert scrutiny from his record, and build support for his cause. He offered no concrete solutions, only low-minded platitudes, because everything he's tried has failed and he has nothing left to try.

He views the national economy as a zero-sum game in which the success of some means the misery of others. He sees unequal distribution of income and wealth as a pervasive evil -- an evil caused by the most sinister of boogeymen: unregulated capitalism.

Before unpacking these themes, shouldn't we ask what they have to do with the economic stagnation we're currently experiencing? It's one thing to lament societal disparities in income and wealth, as liberals hostage to a materialistic worldview always do. But the problems are that the economy has stalled, an alarming number of people are out of work, an increasing number of able-bodied citizens are dependent on government assistance, and people, mired in malaise and uncertainty and the turmoil of a divisive president, aren't saving, investing or consuming.

Our economic problems are not caused by Obama's boogeyman -- which doesn't exist in reality -- and they won't be fixed by shooting a dematerializer at that conjured apparition. Even if income and asset inequality were the greatest problems, Obama's policies have not alleviated them, but made them worse.

In his speech, Obama implied that the free market system, responsible for the most economically successful society in world history, didn't work until it was tweaked by progressives, who jacked up tax rates for the wealthy. That not only defies the historical record but also suggests that but for liberals, we'd have a lawless, brutal, survival-of-the-fittest economic anarchy. In fact, conservatives don't promote a market untempered by the rule of law or regulated by fair business practices and antitrust laws.

Besides, the problem isn't unregulated capitalism; it's overregulation by unaccountable command-control administrative bureaucrats, unleashed by do-gooder elected officials who have delegated their dirty work to them. The problem isn't unfettered robber baron capitalists; it's an overreaching, overbearing, over-intrusive government that won't let the market work or breathe.

How can Obama fairly blame capitalism, which he pretends to love, when CEOs all over the country are complaining that the government won't leave them alone to do their work? How can an economy thrive when the government keeps its major drivers, small businesses, bogged down with unproductive rules and regulations and bullies and sues companies to prevent them from locating in the state of their choice?

If unequal distribution is the primary problem and its main causes are unbridled capitalism and an inequitable tax code, why haven't the ever-expanding socialist solutions and progressive tax system solved those problems?

No one with an ounce of intellectual integrity can deny we've been on a steady path toward socialism for the past three-quarters of a century, and even less can anyone deny we've seen that pattern accelerate into hyper-speed these past three years. Indeed, our problems, under the most statist president ever, have grown much worse.

Moreover, his representations about the tax code are simply untrue. Look at Internal Revenue Service data, as I have, and tell me with a straight face that people earning $1 million or more aren't paying almost twice the tax rate of those earning a secretarial salary. If some billionaires are avoiding income taxes, it's because their income is primarily capital gains (or dividends) -- which represent taxes on sales of assets they've purchased with income that has already been taxed -- or is offset by legal deductions.

None of these facts matters to Obama. He wants you to believe that we have unregulated capitalism (we don't), that it is causing our economic problems (the opposite is true) and that we need to further redistribute income and wealth (when our tax system is already progressive on paper and in practice and when we've never experienced more radical redistributionist policies than we have under Obama).

He wants to keep us preoccupied with greed and hating each other so that we won't have the time to focus on the real cause of our economic nightmare: President Barack Obama.