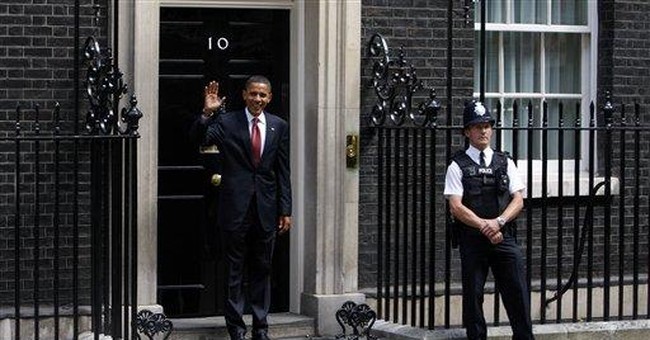 There is one unexpected gift that John McCain's presumptive nomination brings to the GOP. McCain was certainly not my choice, but if any other Republican candidate were running, it's unlikely we'd be seeing as much emphasis in the campaign on foreign policy, and Obama's unfolding incompetence in this area might have escaped essential scrutiny.

Democrats were no doubt looking to capitalize on the Iraq issue before it became apparent that the success of the surge had exceeded all but our most optimistic expectations. Because McCain is perceived as one of the most ardent proponents of the surge and Obama fiercely opposed it, Obama finds himself caught in a trap over the entire issue.

Obama's arguments, echoing the perennial anti-Iraq-war line Democrats have been peddling for years now, that we shouldn't have attacked Iraq in the first place are falling flat, given the radical reduction in violence levels the surge has produced. He is reduced to him-hawing, sputtering, spinning and misrepresenting his unequivocal opposition, which he was earlier showcasing -- during the Democratic primary season -- to contrast himself with chief rival Hillary Clinton.

In the process, Obama's worst attributes are coming to the fore: his pride and arrogance, which paralyze him from admitting any real weaknesses, such as his egregious foreign policy judgments, and his astounding shortcomings as a would-be commander in chief, starting with a profound naivete, inexperience and either ignorance or fundamental dishonesty.

Although liberals generally confer a presumption of sophistication and erudition on fellow left-wingers, they have to be shaking their heads in disbelief, wondering just what their nomination contest has wrought. They can't help but realize that Obama is proving himself daily to be woefully unprepared for the presidency.

They thought they had problems when Obama's sordid associations were dominating the news but were surely confident that once substantive policy discussions recaptured the stage, these associations would diminish, as the messiah's brilliance and charisma would wow and mesmerize us. They're probably wishing right now they only had to deal with the Jeremiah Wrights, William Ayerses and Michelle Obamas.

Can't you just imagine what high-level Democrats are saying behind closed doors about their disappointment over this imploding one-time national political phenom? If any of them had the intellectual honesty they demand in others, they'd be doing mea culpas over their derision of George W. Bush for far less.

But I will say that some in the liberal press are beginning to catch on and to point out -- in their own way -- Obama's weaknesses and inconsistencies and the ludicrously special treatment he's been receiving from their colleagues in the media.

The Washington Post's Howard Kurtz has strongly criticized the unbalanced coverage favoring Obama. But even more surprising was Tom Brokaw's interview with Obama on "Meet the Press." It was in the Brokaw interview that Obama's stubborn refusal to deal honestly with his mistaken judgments on Iraq most strikingly surfaced. Let me give you just a few of the many examples.

In response to Brokaw's charge that he has been engaging in "verbal kung fu with reporters … about the surge," Obama lamely attempted to dissociate the surge from the "Sunni Awakening" and other positive political developments that have occurred or flourished in Iraq as a direct result of the surge. He then robotically repeated the puerile Democratic talking point that but for our "distraction" in Iraq, "we would be further along" in "hunting down al-Qaida and the Taliban in Afghanistan."

It's one thing for liberal commentators to slavishly compartmentalize the war on terror to Afghanistan alone, but it's scary that would-be President Obama trumpets this nonsense. Why, Sen. Obama, must we relegate ourselves just to hunting down al-Qaida in Afghanistan when they have volunteered themselves as targets in Iraq? Or do you believe they're off-limits in Iraq because the Democratic position requires you still to deny they're there?

When asked how he would combat the public's overwhelming perception that Sen. McCain would make a better commander in chief, Obama further embarrassed himself with non sequiturs about his promise to deliver "change."

And when Brokaw pinned Obama down about his threat to go after al-Qaida in Pakistan with or without the blessing of that country, in view of the risk that it could cause a "conflagration" with Pakistan because about "50 percent" of Pakistanis "are sympathetic to the terrorists," Obama stuttered into the evasion that "the situation in Pakistan is complicated."

It's no wonder that Obama is studiously avoiding unscripted town hall meeting appearances with McCain. That's the only wisdom he's exhibited lately.

In response, McCain should relentlessly call him out. McCain's main election strategy should be to expose more of the real Obama to voters every chance he gets.