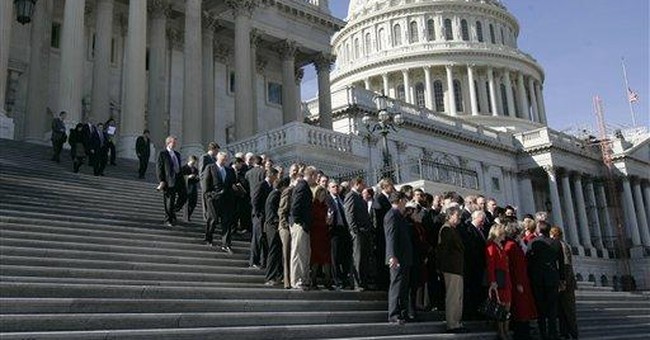 Something is missing in all the intramural debates among different stripes of Republicans this primary season. Bigger-government Republicans don't seem fully to appreciate the extent to which the differences between conservative Republicans and liberals are about more than policy.

Conservatives and liberals differ not merely over the level of taxation, protection of the unborn, immigration, the war and other issues -- though the importance of these disputes cannot easily be overstated.

Admittedly, conservatives view these policy differences as matters of great urgency. The power to tax is the power to destroy. Abortion kills human beings. Illegal, unregulated immigration jeopardizes our national security, undermines the rule of law, could bankrupt our government and, because of the negligence concerning proper assimilation, would likely radically change the culture. Successful prosecution of the war on terror, in Iraq and elsewhere, is essential to our national security.

But at an even more fundamental level, conservatives, being sentimental saps, believe -- apparently unlike Michelle Obama -- that the United States is not only the greatest nation in the world but also that it owes its greatness largely to its Constitution.

Even if liberals were to concede this point, they would probably have different reasons for believing it is so. They tout their fondness for the Bill of Rights and little else in the document, but even here, close inspection reveals their affinity is selective.

They're definitely all about the Fourth Amendment protection against unreasonable searches and seizures -- to such an extreme that they would extend it to non-citizen enemy combatants. They also surely fashion themselves as Fifth, Sixth, Seventh and Eighth Amendment enthusiasts, with their due process, witness confrontation, jury trial, double jeopardy, self-incrimination and cruel-and-unusual punishment provisions.

But their support gets murkier when it comes to the First, Second, Ninth and 10th Amendments. They revere the Establishment Clause but are less enamored of the Free Exercise Clause. They consider themselves free-speech watchdogs but love campus speech codes, the Fairness Doctrine, campaign-finance reform laws and classroom indoctrination. And I've never heard a liberal wax proudly about federalism or the erosion of states' rights that has accompanied its dilution.

Conservatives, by contrast, not only champion the Bill of Rights -- the complete package -- but also believe Americans owe our unique liberties to the scheme of governmental power established in the body of the Constitution.

We believe, as did the framers, that the structural limitations on government, like the separation of powers and federalism, are what make possible individual liberties. The pitting against each other of competing levels and branches of government run by imperfect men was designed to deter government from its natural tendency toward absolutism.

That's why conservatives get so exercised about appellate judges who refuse to honor the Constitution as written and insist on rewriting its provisions from the bench. When they do so, "legislating" certain abhorrent policies from the bench isn't their only sin. They are also tampering with the delicate balance of governmental power that guarantees our freedom.

For example, conservatives couldn't be more passionate about the appointment of judges who would reverse Roe vs. Wade because that would hopefully reduce abortions. But they are also passionate about judges honoring the Constitution's original intent -- not because they are mired-in-the-mud fuddy-duddies but because only by honoring that intent will we be able to restrain the government and maximize our liberties.

Conservatives also see quite clearly the interrelationship between economic and political liberty. Whether or not they've studied Friedrich Hayek's "The Road to Serfdom," they understand that expansive government and socialism -- no matter how well meaning, in some cases -- are ultimately incompatible with individual liberties.

Big government Republicans, however, evidently don't have the same distrust of governmental power, believing it is an unstoppable force that can't be beaten and so must be joined and harnessed to "conservative" ends.

No matter how smart these intellectuals are, they just don't get it. If they did, they wouldn't be happily surrendering to anti-constitutionalist liberals and willingly playing the game on their turf.

Conservatives realize that politics (and the preservation of our liberties) ain't beanbag. They don't invest their future in the platitudes of "hope," "bipartisanship," or "kumbaya." In the end, these are just recklessly naive expressions of confidence in the power of government to deliver us from all hardship.

Instead, conservatives believe that government is a necessary evil to establish order and promote the common defense and the like but otherwise must be restrained in order to unleash the power and freedom of the individual.

Conservatives should not be underestimated as mere players in a cynical chessboard game of party politics. They believe in the power of ideas and will continue to promote their ideas irrespective of the eventual identity of the respective presidential nominees and regardless of how much they are pressured to be silent about first principles.