David Harsanyi
|
Posted: Jan 24, 2020 12:01 AM
Share   Tweet
The opinions expressed by columnists are their own and do not necessarily represent the views of Townhall.com. 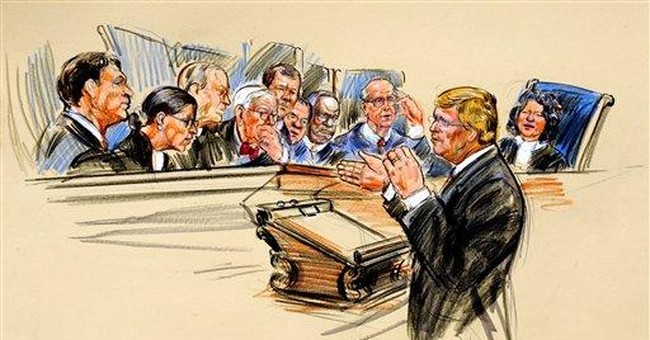 Ten years ago, the Supreme Court overturned portions of a federal law that empowered government to dictate how Americans who were not connected to any candidates and political parties could practice their inherent right of free expression. It was one of the greatest free speech decisions in American history.

The case of Citizens United revolved around state efforts to ban a conservative nonprofit group from showing a critical documentary it produced of then-presidential candidate Hillary Clinton right before the 2008 Democratic primary elections. At the time, the McCain-Feingold Act made it illegal for corporations and labor unions to engage in "electioneering communication" one month before a primary or two months before the general election.

Or, in other words, the law, written by politicians who function without restrictions on speech -- and applauded by much of a mass media that functions without restrictions on speech -- prohibited Americans from pooling their resources and engaging in the most vital form of expression at the most important time, in the days leading up to an election.

"By taking the right to speak from some and giving it to others," Justice Anthony Kennedy would write for the majority, "the Government deprives the disadvantaged person or class of the right to use speech to strive to establish worth, standing, and respect for the speaker's voice."

Right after the decision, President Barack Obama famously rebuked the Justices during his State of the Union for upholding the First Amendment, arguing that the Supreme Court had "reversed a century of law that I believe will open the floodgates for special interests -- including foreign corporations -- to spend without limit in our elections."

Not a word of what he said was true.

First of all, the court hadn't overturned a century of law (though the age of the law bears absolutely no relevance to its constitutionality). Citizens United reversed portions of a law, less than a decade old, that forbade Americans from contributing as much as they wanted directly to the funding of speech. Corporations would still be banned from donating directly to candidates, as they had been since 1907.

Moreover, those corporations, typically unwilling to pick partisan sides for reasons of self-preservation, are still responsible for only a fraction of all political spending, averaging around 1% or less since 2010. Top 200 corporations spend almost nothing on campaigns.

Conversely, since 2010, there's been an explosion in grassroots political activism on both right and left. As Bradley A. Smith points out in The Wall Street Journal today, small-dollar donors are more in demand than ever. Bernie Sanders lives on them, and Donald Trump raised more money from donors who gave less than $200 than any candidate in history.

Nothing in Citizens United, of course, made it legal for foreigners to participate in American elections. It is still illegal for anyone running for office to solicit, accept or receive help from foreign nationals.

Obama, like many progressives, would ratchet up the scaremongering over anonymous political speech. Over the past couple of decades, our political class has convinced large swaths of the electorate that private citizens have a civic responsibility to publicly attach their names to every political donation. They do not. As the often-cited 1995 Supreme Court ruling in McIntyre v. Ohio Elections Commission says: "Anonymity is a shield from the tyranny of the majority."

It is true, though, that since the Citizens United decision, streaming services have been able to produce and play documentaries about political candidates like Trump without answering to a government entity. Publishing companies, especially smaller ones, can now print books about political figures without being policed by the state. And you can contribute as much money you want to any independent group that shares your values. As it should be. The very notion that anyone should be restricted from airing his or her views is fundamentally un-American.

Then again, even if the floodgates had opened for "special interests" -- a euphemism for causes that Democrats dislike -- and even if there had been a massive spike in corporate spending on speech, and even if secretive corporate entities started producing documentaries that disparaged favored political candidates and released them days before an election, it still wouldn't matter. The principle of free expression isn't contingent on correct outcomes, it is a free-standing, inherent right protected by Constitution. That principle holds whether people of free will are too lazy or too gullible to resist alleged misinformation. The proper way to push back against rhetoric you don't like is to rebut it.

Or not. It should be up to you.