'IStandWithAhmed' Hashtag Is Not About Authoritarian Bureaucrats; It's About Pretend Islamophobia 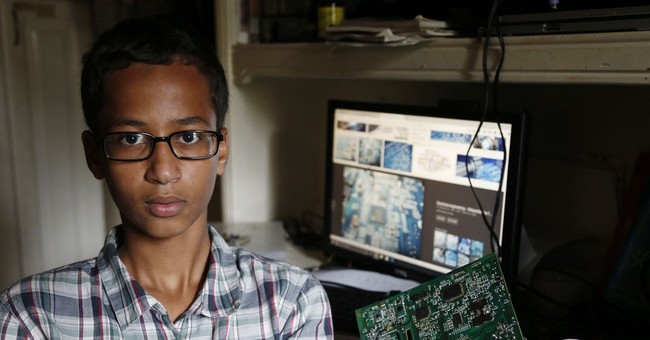 Trending
Earlier this month, a 13-year-old boy in Maryland faced an assault charge after authorities say he kissed a 14-year-old classmate on a dare at school. He's being charged with second-degree assault as a juvenile. He has not, as yet, been invited to the White House.

In December 2013, a 6-year-old boy in Colorado was suspended from school for kissing a girl on the hand. "It was during class," Hunter Yelton explained. "We were doing reading group, and I leaned over and kissed her on the hand. That's what happened." No White House invitation.

In March 2014, a high-school student in upstate New York named Shane Kinney was suspended for wearing a National Rifle Association T-shirt emblazoned with the NRA logo and the words "2nd Amendment Shall not be Infringed" across the back.

In August 2014, a young girl was suspended after breaking a class rule of saying "bless you" after a classmate sneezed. "She said that we're not going to have godly speaking in her class, and that's when I said we have a constitutional right," explained the student.

In June 2014, an 8-year-old named Asher Palmer was expelled from his special-needs Manhattan school for threatening classmates with a toy "gun'' that he had assembled out of rolled-up white paper.

And so on. There have been hundreds of similar cases in schools across the country over the past few years. Unreasonable suspensions, expulsions and punishments are regularly meted out by administrators and overactive teachers who lack common sense and are nervous about litigious parents. But that's not why the Ahmed Mohamed story blew up. The 14-year-old who was arrested in Irving, Texas, for bringing a homemade clock into school has become an orchestrated media event meant to teach the proles a lesson.

"He just wants to invent good things for mankind," sometime Sudanese presidential candidate, sometime Shariah activist and sometime dad Mohamed Elhassan Mohamed told The Dallas Morning News. "But because his name is Mohamed and because of Sept. 11, I think my son got mistreated."

Well, thinking that's what happened, without a shred of evidence, is apparently enough to unleash the sanctimonious sermonizing from almost all quarters.

President Barack Obama didn't tweet in support of Ahmed Mohamed because some local despot overreacted. The White House press secretary didn't invite Ahmed to attend an astronomy night because the kid is super-smart. "It's clear that at least some of Ahmed's teachers failed him," Josh Earnest said. "That's too bad, but it's not too late for all of us to use this as a teachable moment and to search our own conscience for biases in whatever form they take." We're the worst.

Keith Ellison isn't carrying a clock around in Congress to show solidarity with all those kids named Thomas or Billy who are expelled for kissing a girl's hand or drawing a gun. And the Council on American-Islamic Relations isn't pushing this story to media outlets because Ahmed's family is suffering. Liberal websites aren't concerned about administrators and their victims. They're more interested in telling us that in Irving, Texas -- coincidentally the same city where Ahmed's father is an activist -- Mayor Beth Van Duyne opposes the creation of an Islamic court. By conflating the two, they create the false perception that there's a citywide plot against Muslims afoot.

Even in the kiddie debate on CNN, Jake Tapper didn't ask Bobby Jindal what he thinks about zero-tolerance laws or what he feels about teachers who call the police on a kid who builds a homemade clock. He asked the Louisiana governor how he would strike "a balance between vigilance and discrimination." But where is the evidence that Ahmed was arrested because of 9/11 or because he's a Muslim? CNN does not care. Vox does not care: "Hopefully Ahmed Mohamed, and other kids like him, will pay more attention to the president's message than to the small-minded prejudice of the Irving, Texas, high school and police department."

So a story that perfectly illustrated the tendencies of overbearing school administrators is now transformed into a teachable moment about "Islamophobia." And blowing up a nonevent is a way to create the perception that discrimination against Muslims is a pervasive problem in American life. In the real world, though, the preponderance of victims of jumpy teachers are not Muslims. But those cases do not provide Vox or the White House with the fodder it needs for some self-satisfying lecturing.

David Harsanyi is a senior editor at The Federalist and the author of "The People Have Spoken (and They Are Wrong): The Case Against Democracy." Follow him on Twitter @davidharsanyi. To find out more about David Harsanyi and read features by other Creators Syndicate writers and cartoonists, visit the Creators Syndicate Web page at www.creators.com.