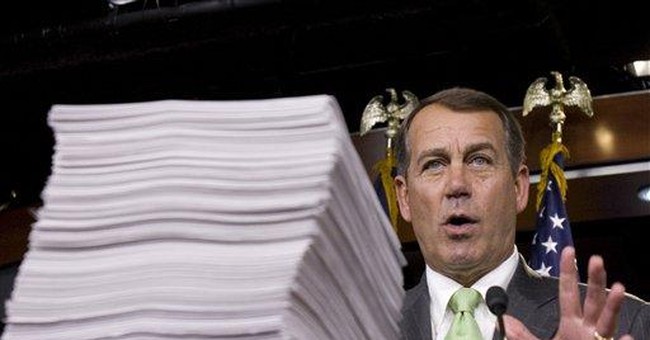 The King James version of the Bible runs more than 600 pages and is crammed with celestial regulations. Isaac Newton's "Principia Mathematica" distills many of the rules of physics in a mere 974 pages.

Neither of them has anything on Nancy Pelosi's new fiendishly entertaining health care opus, which tops 1,900 pages.

So curl up by a fire with a fifth of whiskey, and just dive in.

But drink quickly. In the new world, your insurance choices will be tethered to decisions made by people with Orwellian titles ("1984" is only 268 pages!), such as the "Health Choices Commissioner" and "Inspector General for the Health Choices Administration."

You will, of course, need to be plastered to buy Pelosi's fantastical proposition that 450,000 words of new regulations, rules, mandates, penalties, price controls, taxes and bureaucracy would have the transformative power to "provide affordable, quality health care for all Americans and reduce the growth in health care spending."

It's going to take some time to deconstruct this lengthy masterpiece, but as you flip through the pages of the House bill, you will notice the word "regulation" appears 181 times. "Tax" is there 214 times. "Fees," 103 times. As we all know, nothing says "affordability" like higher taxes and fees.

The word "shall" -- as in "must" or "required to" -- appears more than 3,000 times. The word, alas, never is preceded by the patriotic phrase "mind our own freaking business." Not once.

To vote for the bill, a legislator must believe a $1 trillion price tag is "revenue-neutral" or that it alleviates any of the pain higher costs bring to the average American. This would require alcohol.

Real competition, as far as anyone can tell, is antithetical to the authors of this bill. Remember, you can purchase oranges from Florida and whiskey from Kentucky, yet you're prohibited from buying health insurance from anywhere outside your state; so sayeth Nancy Pelosi.

Instead of the creation of a new market with interstate trade, what we would get is the institution of the pleasant-sounding "Health Insurance Exchange," which would exist, it seems, only to accommodate a noncompetitive, government-run insurance option.

Now, finding a name for a state-run program without offending the lingering capitalistic sensibilities of bourgeoisie has been problematic. So Pelosi went with the innocuous "consumer option" -- known for a fleeting moment as the "competitive option" and popularly as the "public option." Whatever your preference is, it's the option that would lead to a single-payer insurance program.

Democrats say we could save billions by funding a plan that used billions of wasted tax dollars from another public plan that we already supplement with billions. Make sense?

In actuality, we would pay for all this by "cost sharing," or "sharing the cost" of insuring everyone through higher prices and taxes. But no fear. The legislation also would tax "the rich." The bill wouldn't index tax to inflation, so more of you would be on the hook as inflation rose because of the tragically irresponsible behavior of Congress and the White House. The rich -- many of them small-business owners -- are already set to see their federal rates go up in 2010.

Hey, who needs those jerks to create real jobs when we have Washington pretending to do it?

All of this, as Madame Speaker says, constitutes a "historic moment for our nation and families." True. No legislation in modern American history compares when in comes to injecting itself into the everyday decisions of the citizen.

And few can compete with its deception. The bill's intentions are cloaked in euphemisms, and it is teeming with ulterior motives, all cobbled together in closed-door meetings at which industry payoffs are offered using taxpayer dollars to facilitate a power grab of unprecedented cost.