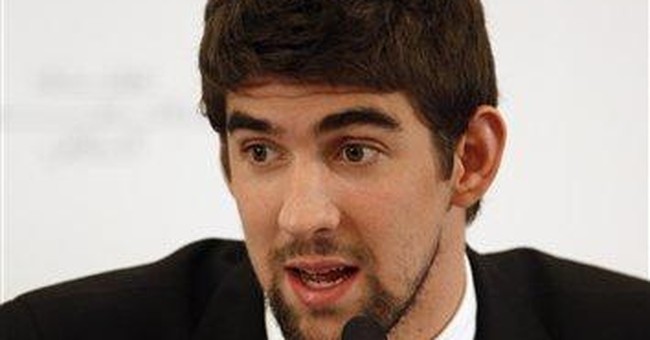 It's true. Recreational drug use has the ability to produce a number of ghastly consequences -- including, but not limited to, becoming president, the governor of Alaska, a Supreme Court justice, a member of the New York Knicks or a fan of "classic" rock.

This week, the media, in sober tones, were obsessing over a shocking national event: A 23-year-old single jock allegedly was caught smoking pot at a college dorm party in South Carolina. Horror.

In reality, the most startling aspect of the Michael Phelps picture incident is that we produced an Olympic superstar dumb enough to place his gargantuan paws around a bong in full view of dozens of partygoers equipped with phone cameras.

Let's concede, then, that pot isn't for everyone and that the famed swimmer may want to be a bit more vigilant in preserving his brain cells. But that's another story.

If you did not recoil in horror when you heard the Phelps non-story or you ignored the moralizing discussions centered on the long-running fairy tale of marijuana's tragic effects, you're not alone. The question is: Why haven't public attitudes translated into public policy?

Every celebrity-does-pot incident is a good reminder. Our antiquated drug laws, commonly referred to as the "war on drugs," waste billions of dollars, create millions of needless criminal records, put thousands of nonviolent criminals in prison, deny the sick medicine, and involve this nation in needless foreign entanglements, all the while robbing free citizens of the right to choose.

The late conservative icon William F. Buckley (who once sailed to international waters to smoke up) said, "Even if one takes every reefer madness allegation of the prohibitionists at face value, marijuana prohibition has done far more harm to far more people than marijuana ever could."

And during his Senate run in 2004, Barack Obama endorsed the idea of drug reform and tepid decriminalization, though he since has pulled back from that position. It's too bad because the new president has a genuine opportunity to bring some common sense to sentencing and more federal deference to states and cities that choose to decriminalize, as many have.

As for the present, Phelps surrendered to public pressure and offered a mushy, stonerish apology. Something about engaging in behavior that "was regrettable and demonstrated bad judgment." (Phelps only has won 14 gold medals. Slacker.)

There is, actually, a soaring probability that a young person who smokes pot will never feel regret. More than likely, the remorse Phelps feels involves getting caught and potentially losing his endorsement with Subway -- which, some say, should be eaten only after smoking up.

A survey published in a journal of the Public Library of Science last year found that despite spending billions on drug enforcement, Americans are still twice as likely as citizens of the Netherlands (where marijuana is legal) to try pot.

Researchers also found that 42 percent of people surveyed in the U.S. had tried marijuana at least once. How many of them have deep regrets about the experience?

Just to be clear, I hope my kids avoid drugs -- legal or not. But how can a parent be expected to educate young children about the factual consequences of drug use when the drug czar and fear-mongering educators undermine the truth with scary stories? Indeed, kids may be mentally slower than normal people, but they're not stoned.

For transparency's sake, I also should admit that in my youth, I inhaled marijuana a bunch of times.

But apparently not enough to be elected to higher office -- or to win a gold medal.