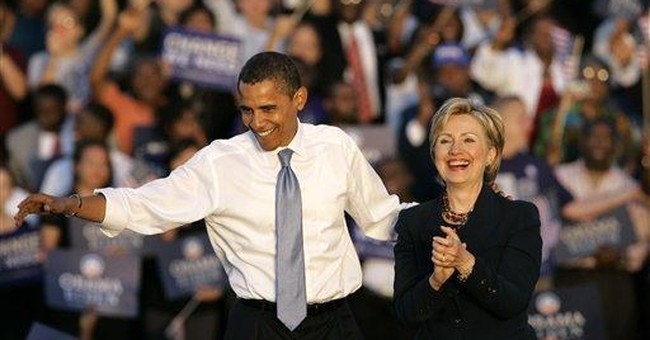 What will Barack Obama's foreign policy look like during his first term? We can ascertain from his rousing words that it will feature equal quantities of peace, love and understanding -- except for bin Laden and Taliban types, who will be obliterated "once and for all."

The nation can look forward to an administration that, as Obama has explained, appreciates judgment over experience. As long as you overlook Joe Biden, Rahm Emanuel and apparently Hillary Clinton, for the time being, this theory holds solid.

If rumors are true, Obama will display his breathtaking political shrewdness by tapping former rival Hillary Clinton as his secretary of state. She deserves it. Henry Kissinger says it's a good idea, for goodness' sake.

With the appointment, the president-elect would send a unifying message to his party and a weary nation. So it's too bad the prospective appointment clashes with virtually every pronouncement Obama has made regarding foreign policy.

Now, I can't think of a better person to send abroad to chastise foreign leaders into complete submission than Hillary Clinton. But Obama's rise to national prominence often is traced to his public opposition to the invasion of Iraq on the very day President George W. Bush and Congress agreed on the joint resolution authorizing the war. This bold narrative pits a brave young politico against the crushing forces of political expediency.

Forces such as Hillary Clinton.

"When it came to making the most important decision of our generation, Sen. Clinton got it wrong," Obama once hyperbolically claimed. In tapping Clinton, would Obama be admitting that her more "realist" neoconny approach to the war on terror, Iraq and other issues is acceptable? Or would it be Clinton admitting she was completely wrong?

If Clinton genuinely flunked "the most important vote of a generation," how would Obama justify tendering her, arguably, the highest-ranking Cabinet position in the nation? And how would Clinton rationalize working for someone she so heartily attacked as immature and unfit for command?

At the time, Obama retorted to Clinton's criticisms regarding his inexperience by saying: "I think what is irresponsible and naive is to have authorized a war without asking how we were going to get out. And you know, I think Sen. Clinton hasn't fully answered that issue."

Has she fully answered that issue yet? Or is Obama more interested in strategic political alliances than change? (And one wonders whether Obama fully grasps the immense amount of baggage and drama a Clinton appointment would carry.)

What other extraordinary experience does Clinton have to serve as secretary of state? Yes, she performed ably on the Senate Committee on Armed Services. Clinton also often reminded audiences that she's visited 80 countries (one with imagined sniper fire) over the years.

Then again, Obama once said: "There is no doubt that Hillary Clinton played an important domestic policy role when she was first lady. It is well-known, for example, that she led the failed effort to pass universal health insurance. There is no reason to believe, however, that she was a key player in foreign policy at any time during the Clinton administration."

Ouch. So she wasn't a key player. So she got the pivotal vote of an entire generation wrong. So she called Obama out as an empty suit completely out of his depth.

Sounds just about perfect for the job -- if Barack Obama were named John McCain.