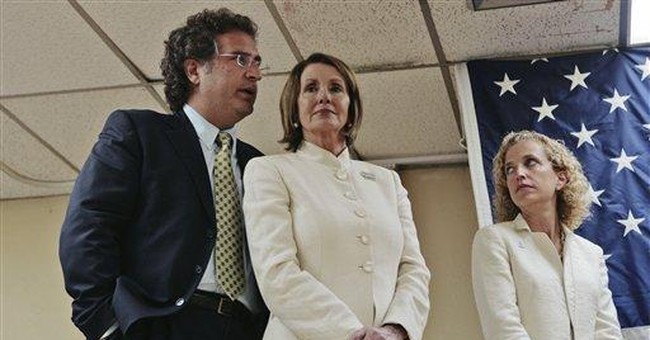 How is it that most ordinary citizens can survive an entire lifetime without experiencing the thrill of a grand jury indictment or the shadow of an ethics investigation?

Well, congratulations! And if you're curious, feel free to live vicariously through your elected official.

It's true that by 2006, Republicans had infested D.C. with shifty and corrupt swindlers, and the party paid the price by handing Congress over to Democrats.

Remember Speaker of the House Nancy Pelosi promising a new age of principled government in 2006? "The American people voted to restore integrity and honesty in Washington, D.C.," she claimed, "and the Democrats intend to lead the most honest, most open and most ethical Congress in history."

Naturally, it was pure bunk.

As a social conservative ogling at underage congressional pages, Mark Foley was the poster boy for rank hypocrisy. Turns out his successor, Democrat Tim Mahoney -- "Restoring America's Values Begins at Home" went the campaign slogan -- evidently has been keeping the torch of sexual infidelity aloft.

Now, no one wants to be accused of sexual McCarthyism -- your dalliances are your own business unless, that is, you happen to be widestancing in the bathroom stalls of the Minneapolis-St. Paul International Airport -- but it seems that Mahoney may have used taxpayer dollars to hide his extracurricular activities.

While infinitely less creepy than Foley's offense, the fundamental difference between the two incidents seems to be the level of media coverage.

No worries. Rahm Emanuel, chairman of the Democratic Caucus, had, according to an ABC News source, "been working with Mahoney to keep the matter from hurting the candidate's re-election campaign." Isn't it heartening to see congressional priorities firmly in place in this new age of ethical government?

Let's face it; after more than two years of rule, this Democratic Congress has been just as bitterly divided, just as malicious, just as unproductive, just as ethically challenged as the one it inherited.

Take Rep. Barney Frank, who was involved romantically for years with a high-ranking executive at Fannie Mae while serving on the House Financial Services Committee -- where he coddled and helped expand the lending practices that, in part, brought about the mortgage crisis.

Forget an investigation; Frank is now the chairman of the Financial Services Committee.

Frank, in fact, is working closely with the chairman of the Senate Banking Committee, Chris Dodd, who not only was the beneficiary of a "VIP" mortgage from a pre-bankrupt Countrywide (not available to the public) but also is the largest recipient of campaign cash from both Fannie Mae and Freddie Mac.

But it's nothing to get excited about. There's worse.

You see, the legislator in charge of writing national tax code, Democratic Rep. Charlie Rangel, doesn't even know how to pay taxes. The House congressional ethics committee is probably so busy sorting out Rangel-related issues it doesn't have time for much else.

Rangel, the chairman of the Ways and Means Committee, apparently forgot about that villa in the Dominican Republic (claiming, laughably, that a language barrier kept him from paying up). He also is accused of abusing his rent-controlled apartments, doling them out to his family, and other tax-related problems.

We all slip up sometimes. We don't all run powerful committees. And if we did, we may have the decency to step down. Not Rangel.

It is instructive to note that the week Democratic Rep. William Jefferson faces 16 charges, including bribery, racketeering, fraud, money laundering, yada, yada, yada is the week Republican Sen. Ted Stevens is wrapping up his own trial on corruption charges.

Both Democratic and Republican lawmakers have lined up to vouch for the unimpeachable honesty of Stevens.

It's nice to see bipartisanship at work. You know, on the important issues.